Set sail to the mainland with us from Hobart to Melbourne and back! We will depart from the nature state of Tasmania and across the infamous Bass Strait to the bussing city of Melbourne. Embark on this adventure, set sail, steer a steady course stand look out and navigate into Port Phillip Bay. But before you will stretch your new found sea legs to explore Melbourne you will first cross the Bass Strait. This strait separates Tasmania from the Australian mainland and is well known for it's fierce weather conditions. Strong currents between the Antarctic-driven southeast portions of the Indian Ocean and the Tasman Sea's Pacific Ocean waters provide a strait of powerful water. Combined with the winds that drive through this strait the history of this water mass is well known from history books. With the modern technology the strait is now more predictable and you will find many ships around you in this busy strait connecting the big cities and states of Australia. Your voyage will start full of excitement, the strait is interesting to sail and offers a spectacular sailing experience. Stand by your lines and be ready to climb the tall masts of Bark EUROPA because many hands will be needed to sail her across these temperamental waters. After a week of sailing, we will arrive in Melbourne, where we stay for one day before we head back to Tasmania again.

During your crossing you might spot some special animals, there are twelve small uninhabited islands in the straight where many birds and seals come to breed. Three of these islands are the only places in Australia where the Pelican breeds, five of these islands are favorite spots for Australian fur seals, other islands are used by the Southern Gannet to find their partners, make their nests and raise their young and if you are very lucky you might spot a shy albatross, these incredible birds nest on albatross island in the Bass strait. On this crossing you also have a chance of seeing seals, fairy penguins, killer wales, humpbacks and dolphins.

NB. Please be advised that for those that combine these two voyages it is possible to stay on board in Melbourne on the 26th of August 2020 on a B&B basis. This is included in the fare. Guests that only booked one voyage, there is no possibility to stay longer on board.

More than 70 percent of this states land is covered in forest, more than half of it is protected by the government and more than 1/5 of the land is listed as Wilderness World heritage area. Tasmania is well known to be Australia's natural state. The vast wilderness of this state will impress and amaze you. Her wildlife can be observed everywhere and the state has the cleanest air observed in the world. This unpolluted air allows the most wonderful species of flora and fauna to thrive. The rainforest trees are ancient and incredibly tall, there are usually covered in many different forms of moss. The forest floor is soft to the touch where mosses and leaves make way for mushrooms and flowering shrubs. The massive ferns are everywhere, here where the animals live undisturbed you find yourself in wonder of just how beautiful nature is when left untouched by humans.

Melbourne's harbour area is called  'Dockland' and was once known as the West Melbourne Swamp. After the development of this grand harbour and the surrounding suburb it is a place not to be missed. Dockland is like a free, open air gallery of urban art. Contemporary art sculptures are practically everywhere around Docklands, just waiting to be discovered. These sculptures have become a strong identifier of the area. Read a book and have a coffee at the dockside library or just sit down and enjoy the busy harbour in one of the lush parks. Watch the sun go down while you listen to the typical sounds of the harbour and have a bite to eat at one of the many restaurants in the area.

Behind docklands you will find the city of Melbourne waiting to be explored. Change into your walking shoes and give those, now very experienced, sea-legs a good warming up because there is just so much to see and do. Museums, galleries, lush green gardens, laid-back laneways, theaters and libraries. Melbourne is an international cultural center. Visit the East End Theatre District and watch ballet in the heritage-listed theaters dating from the Victorian era. Or go to the Southbank area and admire Australian and indigenous art in one of the many galleries. Visit the city centre in the modern Federation Square development, with plazas, bars, and restaurants by the Yarra River and let the busy city atmosphere wash over you. Or maybe you just want to sit down at one of the many sailors pubs and share your new salty stories from your latest adventure on board Bark EUROPA.

Hobart is Tasmania's capital city, more than 40 percent of the Tasmanian population lives in this city and it has lots to offer. When arriving in Hobart you can see the promise of this nature state as the impressive peak of Mt. Wellington is ever present on the horizon. Bark EUROPA will be berthed at the cities large waterfront. This city is shaped around the water and the city marina is home to some beautiful wooden boats. Salamanca's place is at the water front and is remarkable for it's  old architecture, built using convict labour in the Georgian and victorian area, the buildings are an impressive sight. The city has many bars, cafe's and restaurants. All the shops with necessities and many arts, crafts and book stores can be found in Hobart's city centre. There are a few museums well worth a visit, first of all 'MONA' Tasmania's museum of old and new art. A Mona ferry can take you from the city to the museum and the ride itself is already a spectacle. The museums in the city centre usually have interesting exhibitions about native flora and fauna, aboriginal art and history and Tasmania's maritime history. When in Hobart, make sure to visit the Royal Tasmanian Botanical gardens just a few minutes walk from the centre, they are wonderful and many special plant species can be found. There are some tours you can book leaving from the city, you can go to Bruny Island or climb Mt. Wellington. The city and especially the land beyond is worth exploring so make sure to pack your hiking boots for this adventure! 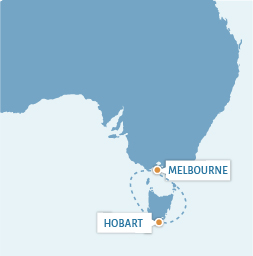