Combine two legs in the Southern part of Chile and enjoy three weeks of sailing, exploring and hiking. The first week will be all about the Chilean Channels, a visit to Puerto Williams and Puerto Natales. From there, we head our bow north and set sails for two weeks of sailing. During these weeks on board, our crew will teach you everything about sailing Bark EUROPA, you will be at the helm, help with setting or taking away the sails or you will be on look out. There will be so much to see about wildlife, gletsjers and nature!

NB. Please be advised that the overnight stay in Puerto Natales on the 28th of March 2020 in between the two voyages is included in the fare. It is possible to stay on board on a B&B basis only, with no extra costs. Sailors that have booked one voyage only instead of a combination voyage, cannot stay any additional nights on board.

We start our journey in Ushuaia, also known as “El fin del Mundo” – the end of the world, where you will embark our lady EUROPA. A short taxi ride will take you from the center of Ushuaia to the harbour. After signing on to the crew list and taking your luggage to your cabin, you will enjoy your first meal on board. The Captain and the expedition leader will inform you about the plans.

This voyage will start with a short sail from Ushuaia, crossing the Beagle channel to Puerto Williams. Here we will step ashore for the most southern trek of South America on Isla Navarino, were we will be welcomed by stunning views of the Beagle Channel, Puerto Williams in Chile and Ushuaia in the background in Argentina.

Puerto Williams is the capital of the Chilean Antarctic Province and claims the title of the world’s southernmost city. The settlement was founded in 1953 and served primarily as a naval base for Chile. The port attracts tourists and scientific activity linked to Cape Horn or Antarctica, but also hike enthusiasts that go on multi day hikes in the 'Dientes de Navarino (Teeth of Navarino)' mountains surrounding Puerto Williams.

After a day spent hiking, our visit to Puerto Williams will end with an all-time South American favorite: the Asado, or traditional barbeque!

Sailing further through the beautiful channels and fjords of Southern Chilean Patagonia, a breathtaking landscape of high snow-capped peaks, glaciers and dramatic fjords will be seen.

After three days, we will arrive in Puerto Natales, a fishing port in southern Chile and the gateway to the Torres del Paine or Bernardo O’Higgins National Parks. Puerto Natales was founded in 1911 and is nowadays one of most important urban centers of Patagonia.

The surroundings of Puerto Natales are characterized by their natural resources and beauty, being surrounded by valleys, fjords, archipelagos and ice fields. It’s a perfect base for hikes in the Torres del Paine National Park and together with our guides we will explore the nature of Chile with its rich array of wildlife and plants.

After spending a day in Puerto Natales, some will decide to end the journey here and continue to explore the beautiful Torres del Paine nature reserve. Others will decide to come with us to the north, to Valparaíso. For them, another two weeks of sailing along the coast of Chile is waiting!

Leaving the ‘fin del mundo’ behind us, we will now start our sail up north, via the Humboldt current. After some northing, the South Eastern trade winds will take us to our next destination and our sail training will begin. Learn all about setting and taking away the sails, by hauling and easing lines. Climb in the rigging to furl or unfurl the sails. The crew will learn you how to trim the sails to the direction of the wind. They will ask you to help with the maintenance of the ship, by assisting in for example woodworking, sail making or rope work.

The Humboldt current, named after the German naturalist Alexander von Humboldt, has an impressive ecosystem that hosts a wide range of organisms, such as plankton, crustaceans, fish and marine mammals. With some luck we will see whales that come here to feed on phytoplankton. The area is also known for 18 to 20 % of worlds marine fish catch, mostly being mackerel, anchovies and sardines.

After a voyage that was all about sailing, nature, wildlife and hiking, we will arrive in a bohemian and colourful world heritage city that has long inspired poets and writers. The hills of the city are fully packed with small and colourful houses, where you can take endless staircases or historic funicular elevators to stroll through the maze of narrow streets or enjoy the views of the Pacific Ocean in front of you.

Valparaíso is located about 120 kilometers northwest of Santiago and is one of the South Pacific’s most important seaports. It played an important geopolitical role in the second half of the 19th century, when it served as a major stopover for ships traveling between the Atlantic and the Pacific, after crossing the Strait of Magellan. The city was blooming and was known by many sailors as “the Jewel of the Pacific”.

During the second half of the 20th century, and especially after the opening of the Panama Canal, the city dealt with a serious blow. However, the last years twenty years the city reached its recovery, attracting artists, writers and tourists to the historic districts of the beautiful city and evolving into a major educational center with multiple universities and colleges. The port of Valparaíso continues to be a major distribution center for marine traffic and cruise ships and will also be our gateway into the Pacific!

The permanent crew will give you sail training and you will assist in all sail handling. The captains and officers of Bark Europa are easy to talk to and like to get involved in your sail training. They will explain traditional- as well as modern ways of navigation. They will organise and run you through safety drills and procedures. During your eight hours 'off watch', there is time to rest and enjoy the scenery. You can read a book in the library or in the deckhouse. The bar will be open for a drink and a snack. 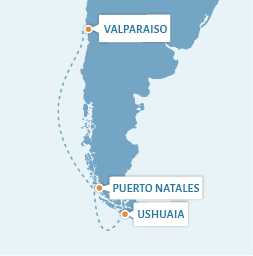