Sail the last leg in the Pacific Ocean with us before Bark EUROPA's Australian adventure starts. After many visits to small islands, Bark EUROPA will sail towards the mainland of Australia, the first large landmass since leaving South America months ago. Your voyage starts on the green and laid back island of New Caladonia. The waters around this small island are many colours of green and blue and at night, the sky is full of magnificent southern stars. Set out a course, brace the masts, haul the halyards and off you go into the deep Coral sea.

Beneath her surface this watermass is home to many incredible coral reefs. They include the Great Barrier Reef, which extends about 2,000 km along the northeast coast of Australia and includes approximately 2,900 individual reefs and 1000 islands. There are at least 30 species of whales, dolphins, and porpoises that live in the coral sea, including the dwarf minke whale, Indo-Pacific humpback dolphin, humpback whale and dugongs. Six species of sea turtles breed on the Great Barrier Reef and can be seen at sea.

More than 200 species of birds (including 22 species of seabirds and 32 species of shorebirds) visit, nest or roost on the islands and reefs in this sea, including the white-bellied sea eagle and roseate tern. Most nesting sites are on islands in the northern and southern regions of the Great Barrier Reef, with 1.4–1.7 million birds using the sites to breed. Even though we will not be sailing close to the reefs these animals can be spotted along the way.

Sailing in these southern waters gives you the opportunity to learn all there is to know about sailing a traditional square rigger. Bark EUROPA's many masts, spars and sails take a bit to get to know but once you know your lines and found your sea legs the fun really begins. You are invited to help the crew with all sailing tasks as well as maintenance jobs. Sailing towards this massive southern continent will be full of excitement, you will steer a course on the helm, stand look out on the bow and climb the tall masts of Bark EUROPA. You will truly be a part of the crew who sails Bark EUROPA to Brisbane, working with the weather across the Coral sea.

From the western red-soiled wilderness to the blue lagoons and green lush mountains of the east, New Caledonia has loads to offer!

Located between the east coast of Australia and Fiji, the first settlers of New Caledonia are believed to be the Melanesians from Southeast Asia around 3000 BCE. The first European to visit the island was Captain James Cook, who gave it the Roman name for Scotland, Caledonia. In 1853 the island was annexed by France, and served as a penal colony until 1897. With the formation of the French overseas territory in 1946, the island became part of it.

Because of this French annexation and overseas territory, the island became a mix of French and Melanesian influences, a melting pot of different ethnic influences including Asian communities and people from other islands.

This mixed culture is still all around, for example in Nouméa, the seaside capital of New Caledonia, where European style architecture and glamorous marinas feel like you’re on the French Riviera. While at the same time, outside the capital, the mountains, rainforests and grasslands feel like the local Pacific culture again.

About 60% of New Caledonia’s lagoon is listed as UNESCO World Heritage Site, and the marine environment is one of the most beautiful in the world. Hundreds of underwater wildlife species and breathtaking corals are preserved in the reefs of Caledonia.

Your adventure on board Bark EUROPA will end in Brisbane, the river city. This beautiful, warm and sunny city on Australia's east coast lies snuggly between the gold coast and the sunshine coast. It sounds as good as it is: sunshine, sea and a lovely city to explore. Brisbane is called the river city because of her beautiful Brisbane river that curls through the city centre. The city can be explored from the water in the many different kinds of boats that sail around or by foot, bus or bike.

Have a look at the South Bank Grand Arbour with her impressive 443 curling steel collumns covered in flowers. When you are at the South bank area a visit to the Nepal Peace Pagoda is well worth it, with its traditional architecture, art works and meditation area. The Parklands area is home to many cafés and restaurants and a nice place to sit down and enjoy the busy city life. Have a stroll over one of the many markets in town that offer many different stalls, from fruit and vegetables to garments and accessories from some of Brisbane's most talented young designers. Another great thing to do while in Brisbane is to visit the City Botanic Gardens, they're Brisbane's most mature gardens with many rare and unusual botanic species. In particular a special collection of cycads, palms, figs and bamboo. It also shows the Sir Thomas Brisbane Planetarium and the "Tsuki-yama-chisen" Japanese Garden.

If you have a bit more time to explore Brisbane and its surroundings a good outing is to go to Brisbane's Forest Park. The large nature reserve lies on the western boudary of the city into the Moreton Bay Region. It lies between Mount Coot-tha Reserve and the hogher peaks to the north. The park supports many plants and animals and it is essential to their survival. In 2015, a competition by travel guidebook Rough Guides saw Brisbane elected as one of the top ten most beautiful cities in the world, citing reasons such as 'its winning combination of high-rise modern architecture, lush green spaces and the enormous Brisbane River that snakes its way through the centre before emptying itself into the azure Moreton Bay'. 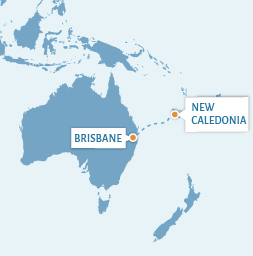