After a long time of dreaming, preparing and arranging, Valparaíso (Chile) will be the start of our Pacific adventure. In about three months’ time we will cross the largest ocean on earth, extending from the Arctic in the north to the Southern Ocean in the south and covering nearly one-third of the earth’s surface and almost half of its water surface. Step on board and join us for this epic adventure!

We will depart our voyage from Valparaíso, a bohemian and colourful world heritage city that has long inspired poets and writers. The hills of the city are fully packed with small and colourful houses, where you can take endless staircases or historic funicular elevators to stroll through the maze of narrow streets or enjoy the views of the Pacific Ocean in front of you.

Valparaíso is located about 120 kilometers northwest of Santiago and is one of the South Pacific’s most important seaports. It played an important geopolitical role in the second half of the 19th century, when it served as a major stopover for ships travelling between the Atlantic and the Pacific, after crossing the Strait of Magellan. The city was blooming and was known by many sailors as 'the Jewel of the Pacific'.

During the second half of the 20th century, and especially after the opening of the Panama Canal, the city dealt with a serious blow. However, the last years twenty years the city reached its recovery, attracting artists, writers and tourists to its beautiful historic districts and evolving into a major educational center with multiple universities and colleges. The port of Valparaíso continues to be a major distribution center for marine traffic and cruise ships and will also be our gateway into the Pacific!

Leaving South America behind us, we will head our bow westward to the endless waters of the largest and deepest ocean on earth: the Pacific, nearly 64 million square miles in size and covering about half of the Earth’s water surface, with the deepest point of 35.797 feet / 10.911 meters.

The more pronounced Pacific easterly trade winds originating in the south east Pacific are perfect for sailing a square rigged vessel like Bark EUROPA and promise a comfortable sail onto the endless Pacific blue. The upcoming 20 days after setting sail in Valparaíso will be all about sailing these great waters to Hanga Roa, Easter Island.

Learn all about setting and taking away the sails, by hauling and easing lines. Climb in the rigging to furl or unfurl the sails. The crew will learn you how to trim the sails to the direction of the wind. They will ask you to help with the maintenance of the ship, by assisting in for example woodworking, sail making or rope work.

Easter Island is world famous and for a good reason! This interesting and remote island is known for it's Moai Statues. The stone blocks, carved into head-and-torso figures, are 4 meters tall at average and weigh about 14 tons. These impressive and intriguing statues where carved and moved by the first settlers of the Island. The people who carved these giants somehow navigated a fleet of wooden outrigger canoes to this tiny speck in the vastness of the Pacific Ocean. Here, about 3,700 kilometers west of South America and 1,770 kilometers from the nearest neighboring island, the Rapa Nui carved and erected some 900 Moai across the island during the 10th till the 16th century reflecting the history of the dramatic rise and fall of the most isolated Polynesian culture.

The Polynesians arrived from the west rather than the east, and the people of Easter Island are believed to be descendants of intrepid voyagers who set out from Taiwan thousands of years ago. Legend says that the people left for Easter Island because their own island was slowly being swallowed by the sea.

Many of the Pacific Islands where discovered by Polynesians because they used rigged canoes rather than the square rigged vessels that were used by the Europeans to wander the oceans. These canoes where not able to sail before the wind like the square riggers could. This meant that the canoes had to tack a lot making their tracks across the Pacific unique. Where the European vessels sailed in relative straight lines, missing most of the islands the Polynesians came across many of the islands in this vast ocean.

Next to the mysterious Moari statues this paradise island also has some truly pristine beaches. Who doesn't love swimming in lapis lazuli colored water or walking along beaches of soft white sand? Easter Island has many breathtakingly beautiful beaches. Anakena beach is a perfect example of paradise. This wonderful beach surrounded by an impressive coconut tree forest is something extra special. It is the place where Hotu Matua disembarked. Some people say that one of the many caves along the beach was this king’s home. 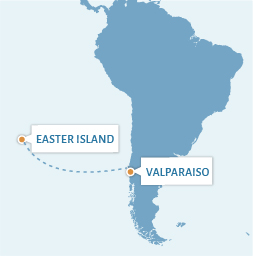