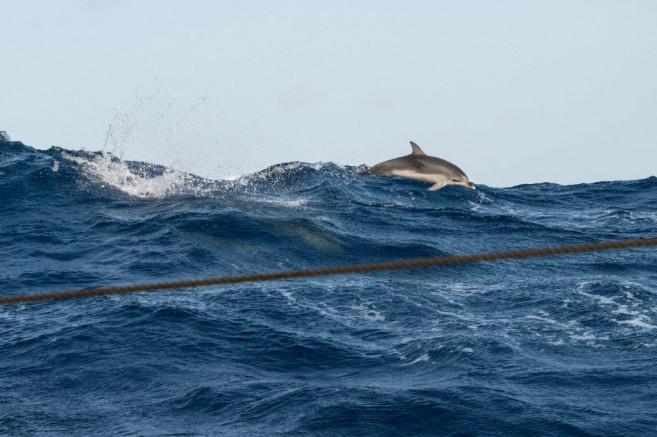 Strong Trade winds pulling us on a good speed towards Cape Verde archipelago. Entering the Tropics.

Tropic of Cancer lies just ahead. The Trade winds keep pulling us on a good speed towards the equator. It's been just a handful of days since departure from Canary Islands, and just about a month when Europa let go her moorings from Netherlands. But time at sea (busy on our tasks, the watch system and the immensity of water surrounding us) seem to run differently than when we carry on with busy lives ashore. Many had left behind our comfort zones on land, our shields for a life guided by the wheels of routine. But the changeable and shifting winds propelling good old ocean wandering ships over the ocean swells, offer a choice. A choice for a unique way of living, for different experiences travelling in these modern days, a choice for a different adventure. And now, after a few days sailing we are getting used to the usages of the life at sea. To the change on our priorities, where the ship comes alive off the wind and we have to make the most of it, always keeping an eye at the sails and how they are filled, the flag and the compass guiding our course. There is a time for performing our duties, time for resting cradled by the rolling ship, and occasions for enjoying the views from aloft and the marine wildlife down below at the surface. Like when this afternoon, as the sun approached the horizon, a small mixed group of Spotted and Common dolphins join us for a while, rejoicing on the relatively big swell and performing some show-off acrobatic jumps.

All while we are still lucky enough to keep enjoying a good regime of Trade Winds. After the NE-ly winds eased down for a while during the early hours of the day, in the early morning increased up to 25 to 28kn, pulling us at a good speed between 8 and 8.5kn on our SW-ly course. That made for dousing the Top Gallant Studding sail on Portside, and a bit later the Starboard one as well. Doing so, a necessary repair is discovered to do, it will be mended on deck for the next couple of days before it can be hoisted once more.

Again in the afternoon the wind eased down a bit, but still we sailed at a good 6.6kn, until the fair strong breeze veered slightly to more ENE, still blowing a good 21kn, keeping us sailing at speed of 7.5kn on our 220º course. Under those circumstances it was time to hoist the Mizzen Top Staysail. Later on, when the wind backs again to more NE-ly making for a more downwind sail, is time to pull it down and furl.

In-between the sailhandling, overhauling buntlines to stretch at the maximum our canvas to the good winds, steering and lookout, the permanent crew fitted a sail training talk. A refresher for many of us, for others an introduction to the naming of sails, focusing more on how the square sails work, followed by a round on deck locating and identifying ropes and pins. An unexpected guest seem to carefully follow our evolutions on deck; what seems to be a Laughing Dove had landed on the ship, probably blown off the African coasts, with the good fortune of finding us in the middle of the ocean to land and take a rest, hoping for a lift that would bring it further south closer to land again.

The outstanding sailing has made for a good progress of 160nm in the last 24 hours, and until noon today we have left behind 297nm, all under sail since departure from Tenerife. That means 558nm to go to the Cape Verde archipelago, which maybe, if lucky, in a few days we will spot at the distance. This has brought us already to cross the latitude of 23°26ʹN north, the Tropic of Cancer just at the end of the day. We left behind the subtropical waters and enter the tropics, where we will sail during the next days to reach the equator and then change hemisphere.

The tropic of Cancer represents the northern circle on the celestial sphere where the sun appears to turn after reaching its greatest angular distance from the celestial equator on the 21st of June.

As we keep sailing towards the equator, we will catch up with the sun, which declination passed the Equator on September 21st on her way to the Tropic of Capricorn. (23°26ʹ S on Dec.21st). In a couple of weeks our Southern Latitude will equal the declination of the Sun on that day she will pass right over our heads.

Calculations already started for this day and time, a bottle of wine is there to win!

All these Phenomena are caused by the tilting of the Earth axis, being 23°26ʹ and the reason that we can enjoy different seasons.

Thank youJordi. I am very happy you are back with beautiful stories.