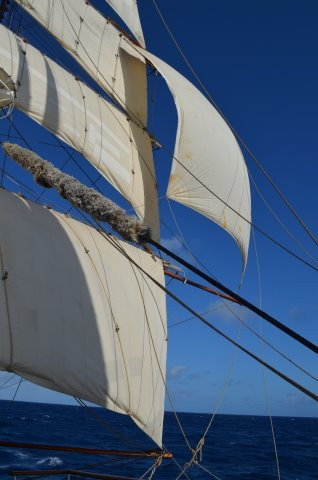 At noon we had 170 NM to go to St Helena. Almost two weeks after
departure from Cape Town everybody on board starts to get excited to see
the island. Hopefully the lookouts can spot the 820 metre high island
with dawn tomorrow.
The sailing over the past week has been really good. Starting with light
SE'ly winds, it has been slowly increasing from 10 up to 20 knots. With
help of everybody the stuntsl's were soon ready to be hoisted. The
skysail mast followed soon.
The voyage crew has been attending lectures on ship, sail and rigging
topics. There was enough practise as we handled sails frequently.
Setting stuntsl's and especially taking them away when the wind
increased goes very smooth.
When the speed allowed it "Samanta" the manta trawl has been deployed by
the scientists. It's interesting every time to see what has been
collected. Plastics, but also all sorts of small living animals. After
inspection they are put back into the sea. And we learned something more.
Earlier this afternoon the voyage crew could show how much they learned
about ship and rigging in the pinrail chase. The 3 watches were
competing teams and our new crew members; Colette, Ayden and Odin
defended the crews honour. Finding pins, tying or untying knots and
being washed down by a 'tropical squall', Everybody joined and it was
serious business with a lot of laughing.
Now we're sailing on into the sunset and prepare to drop the anchor
tomorrow.
Keep you updated.
Janke