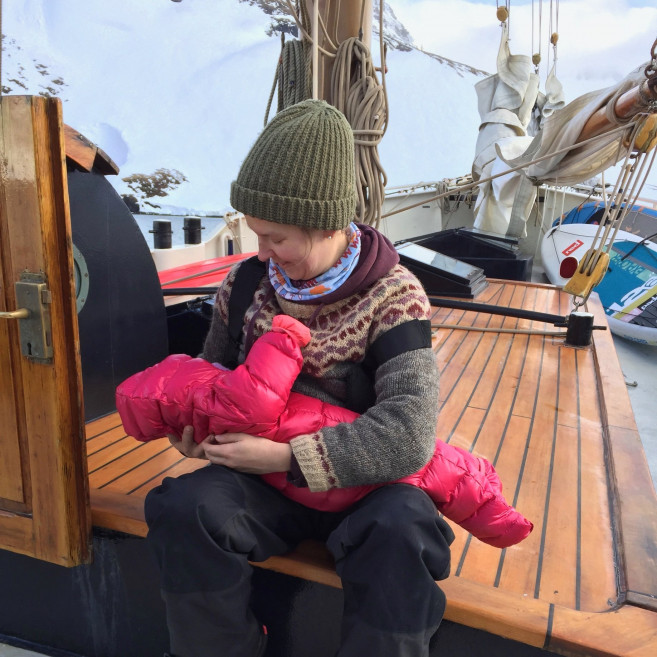 Since 1994 Bark EUROPA has sailed with an international crew; all part of the worldwide EUROPA family and every member has their own story to tell. This is the story of Annukka, who sailed and guided on Bark Europa during the Antarctica seasons 2014-2017.
When I started sailing on Europa, I did not really know what to expect. Before this I had been sailing mainly on smaller schooners, for shorter trips and with only a few persons in the crew. My first Antarctica season started in Punta Arenas, Chile, I had never before been to South America either. What an exciting moment, to walk on this magnificent ship and meet the professional crew of almost 20 people who all were busy on their projects. Half of them wore working clothes covered in paint or tar or some other traditional sailing ship-related substances and met me with a big smile shining on the more or less dirty faces, others were going through the endless provision lists or packing the provisions into the ship’s storages.

I think when I first visited Bark Europa, the captain met me, welcomed me in a friendly manner and then said something like “Ok then, go make yourself useful”. The Europa family is in a way described by these words. Every pair of hands on board is needed and valued, and the owner of these hands is responsible for using them to the benefit of the ship and the rest of the crew. That is in principle what a happy human being needs: to feel useful and be working with other people towards some common goal – having some fun while doing it. Best families give you such a feeling of belonging and being on board Europa one would get this feeling.

Since my time on Europa, I started a family of my own, and a sailing business in my home country Finland, and my actual close family members now make up the little crew that I work with. During my time on Europa, I met both inspiring people who grew up in sailing families on board ships, and people who got to sailing later on in their life and made their own sailing family when they were adults, like I did. Either way, it’s a gift and a privilege to belong in a family like this and share the adventure with them. You can follow our Napaland family project Napaland, www.napaland.fi