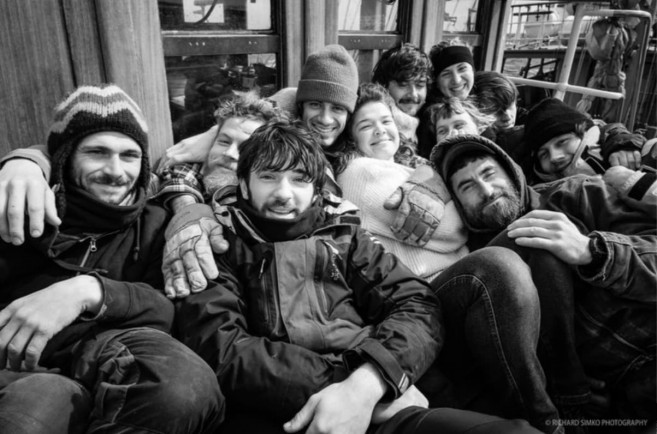 Since 1994 Bark EUROPA has sailed with an international crew; all part of the worldwide EUROPA family and every member has their own story to tell. This is the story of Merel, who sails on Bark Europa since 2017 as a barhand, cook's mate and cook.
When I first joined Europa in the summer of 2017 I had never set foot on a tallship. As anyone in my shoes might imagine, I was utterly overwhelmed by her size and beauty, but couldn’t tell bow from aft. On my first night I woke up in sheer terror, confused by the pitch blackness of the cabin I was sleeping in. A darkness I now, after 3 years of sailing, have come to love and associate with deep restfulness. There’s nothing quite like laying your head on your pillow after a watch, turning off the light and surrendering to the motion of the ocean (something you’ve been struggling with all day while preparing the meals), and listening to the sound of the rippling, or smashing, waves against the hull.
I was working the bar on that first trip, and learned a lot from Rensje and Gjalt, two cooks as salty as you’ll find any sailor. I had years of experience waitressing and cooking in restaurants but I soon realized that what I thought I knew was mostly useless. Speed for one thing, forget about it. You take a corner too fast, you're flat on your face. Walking with a multitude of plates? Do you have a death wish? No. You’ll have one hand for yourself from now on, the other one is for the ship. I learned that the hard way. But I did learn, with much help from the crew, who adopted me into their family and showed me the ropes (quite literally).

Because we have limited privacy and spend months at a time on board, a whole array of emotions are shared between and amongst crew members. We love each other, can be annoyed with each other, support each other when they are down, and always respect each other. We cry together, laugh together, pull lines together and do dishes together. But above all we share this one extraordinary adventure that no one at home truly understands because they don’t take part. This mutual understanding binds us together, and the whole crew functions as one as we do our job; sailing Europa no matter the weather, and making dreams come true; our voyage crew’s as well as our own. I learned that the ship and her crew sail so well because not one part functions on its own, it’s the combined effort that sets everything in motion.

And what makes us all part of the same family, is that everybody puts their hands to use. Whether on watch or not, there’s always some crafting going on. From knitting to braiding, working leather or wood, or simply by making music, we share in activities and learn from each other's skill. There’s an urge to create inherent in every crew member I’ve been lucky to sail with. It inspired me on my part to pursue a trade to dedicate my landlife to, as I consider myself to live two lives, one on land and one at sea. When I’m not sailing, which unfortunately due to corona none of us have been able to do for almost a year, I make artisanal Gouda cheese at Booij Kaasmakers, a small family business in the middle of the Dutch landscape. Two occupations that couldn’t be further apart at first sight, but in truth they both define me, and touch upon the same parts within myself; hands-on ness, telling the story of how I look at the world, and love for craft and creation. And in my opinion I’m in the best position possible, because I’m always looking forward to going back to my cheese family, equally much as I can look forward to going back to my family on the ship. Because no matter where in the world Europa is docked, after 24 hours of traveling through air, airports, customs, buses, unfamiliar suburbs, the moment I step foot on Europa I am home again.