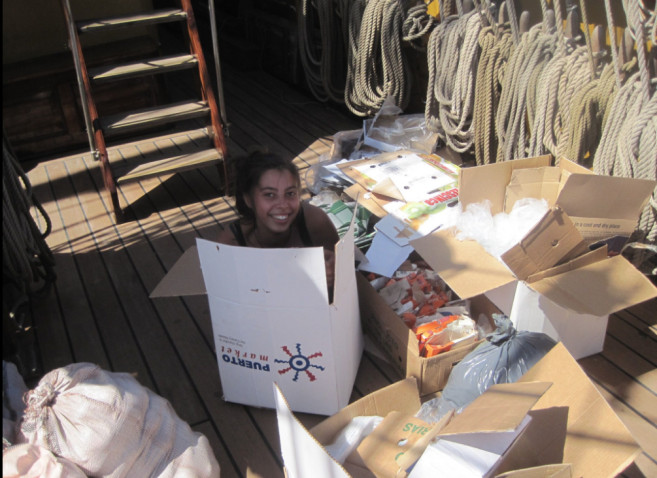 Since 1994 Bark EUROPA has sailed with an international crew; all part of the worldwide EUROPA family and every member has their own story to tell. This is the story of Arnoud and Rosalie, who sail on Bark Europa since 2018 and 2016 as guide and cooks-mate/barhand.
Rosalie - When I just turned 6 years old, I remember making a drawing of a ship. A tall ship with three masts. This ship was called Bark Europa and back then my dad was sailing on it to the very very South, the white continent Antarctica. From then on I knew of the existence of the ship and I heard from the adventures from Rensje, the cook on the Europa, who is the aunt of my best friend Lot. A little more than a decade later, I was excited to go on adventure with the ship myself.
I found myself a cooks-mate and bar tender working with Rensje and Gjalt! Back then I had no clue about sailing. I did not even know what starboard and port-side meant. However, during this ocean crossing I learned an incredible lot. Not only about cooking and working together day and night in an ultimate small space, but also what the stars look like when you sleep on deck in the tropics and how it feels to climb up the mast after a day of work and see 360 degrees of water around you. Or later when I was able to join two trips to the Antarctic myself, I recognised the sounds of the penguins, of how my dad used to explain to me what sounds they made. Later on, when I went studying Product Design, I was only able to join during summer breaks. My stories made my dad jealous, and I encouraged him to become a guide on the ship. And so he did.

Arnoud - In 2004 I first sailed on Bark Europa to Antarctica together with Günter, Rensjes brother, my best friend. During that time there were no lectures, but I could not help myself, being a climate scientist studying the atmosphere during my daytime job, and gave a lecture for the crew and voyage crew about the ozone hole that appears every Austral spring over Antarctica. I always dreamt of sailing again and giving lectures but thought I was way too busy with my everyday life. It was funny how Rosalie convinced me to join the crew as a guide after Klaas asked me. I said I was too busy, but Roos asked me that if now was not the right time join, when it would be. So that convinced me.
I joined the infamous Jordi as a guide during the 2018 Antarctic season and for the Cape to Cape (a dream come true). And so started the time when Rosalie and I took turns being on board. We never sailed together unfortunately. But adding our trips together, Rosalie and I pretty much circled the Antlantic.

During the three months I was on board there was a mystery though. Rosalie sail-mailed me one day that she left a note for me on board and hid it in a book in the ships library. It was ‘some engineering book’ but she forgot the title. All along the ocean crossing from Tristan da Cunha until Capetown I went though all the books I could find and Klaas also took the whole library inside out, which is always good to sort things out. But no letter from Rosalie. Until Capetown when all the Antarctic season books are stored and are swapped for the Northern summer books! The message in a ship. So I wrote a letter back to Rosalie and packed it with a Macaroni penguin (well, a doll) in the dry store.

Rosalie - One day while sailing in summer, Marianne asked me to get some oats from down below. There I found a little penguin pet animal, that was hiding in there all the way from the Antarctic. My dad hid it there with a little note for me…

Arnoud - Now that the Europa is grounded due to the COVID pandemic, I try to help out every now and then in the various shipyards in the Netherlands. And it starts itching. So, when a new schedule is ready, I’ll be as well! Maybe Rosalie and I will have an opportunity to -finally- sail together. If not, we’ll just keep exchanging letters through some part of the ship. Maybe one day, Eden (Rosalie’s newborn son) will be a member of the crew…

Hi Arnould, I was on the cape to cape with you. Your lectures were informative and i enjoyed them very much.