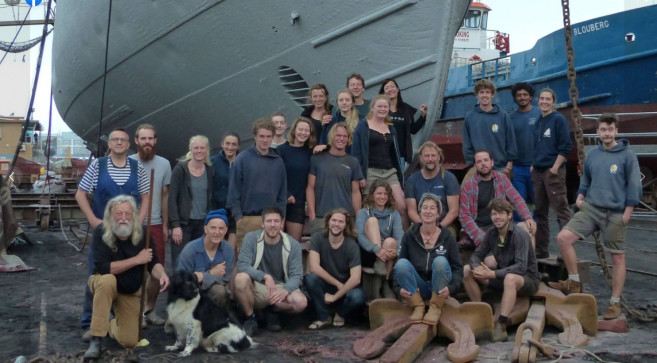 Since 1994 Bark EUROPA has sailed with an international crew; all part of the worldwide EUROPA family and every member has their own story to tell. This is the story of Laura who first came on board as a barhand in 2012 and sailed on EUROPA as crew until 2017. I met the Europa crew while I was working in a pub in Ushuaia more than ten years ago. Every time the ship was leaving I would count the days to be able to see them again and listen to their amazing stories about sailing around the world, especially the Antarctica ones.

It was summer of 2009 when a friend and I had the opportunity to step onboard as visitors and that is when I fell in love with Europa. Arran gave us a tour around and took us climbing. That day I went back home with a new dream:I had to sail to Antarctica. For almost one year I kept it to myself till one day I decided to write to Rensje and ask for her advice.

Long story short, my e-mail was wrongly sent to Captain Eric, who kindly explained I should write to Captain Klaas about it. So,there I was talking to two captains regarding a dream that was about to come true. In January 2012 I would sail to the white continent for the first time as a bar keeper of the most beautiful ship I had ever seen. And lucky me,there were many other trips after that one.

Antarctica was just wonderful. Like being on another planet, that's how I felt. Icebergs, snow, seabirds, so much wild life, all together in perfect peace and harmony. I had not imagined I would ever be in such a stunning place. But, even better than that (yes, there can be better), was being able to share my experience with such an awesome group of strong, sweet, lovely people. The Europa crew showed me that when you love what you do,work is never too much.

Four years have passed since I waved to Europa last time from a Brazilian port and embarked on the new adventure of becoming a mum.
Now, even when lately the world has become a strange place to live in, my little Félix keeps my heart happy. But some nights, when falling asleep is not as easy as it should, I close my eyes and imagine I'm there, in my cozy wooden bunk, being rocked by the water. Outside is white and cold and I can only hear the waves.The night watch guys are on deck. All is good. And, in dreams, I come back to the ocean.