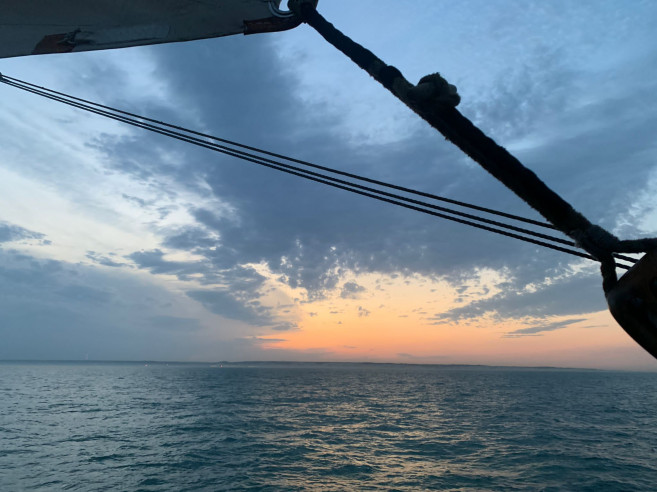 The signaling of dolphins becomes more regular. The first ones in the middle of the night, mainly because of the trail of light they leave behind. The top layers of the ocean contain organisms that are capable of bioluminescense: they emit light when disturbed. One of the researchers travelling with us on this voyage investigates these creatures. The other scientist on this trip is looking at the occurrence of (micro)plastics in the top layer of the ocean. Both items may have a relationship, but this still needs confirmation. The searches conducted on Europa however are a first set-up that is also meant to validate the methods used. It would be nice to show the urgence for a more detailed research into the role of micro)plastic pollution of the oceans. The (underwater) world would surely benefit from that.

Halfway the night the decision was made to cross the shipping lanes of the Channel. Instead of 270 the helmsman was ordered a course of 170. We were heading for France! Probably we would see the (British) Chanel Islands on the way there. Many times France and Britain have been quarreling and fighting over these islands. In general the idea of being in control (in fact on anything) has frequently driven to war. The result? Widows, destruction and orphans. Nowadays people still try to settle conflicts by force and fighting. And still destruction, orphans and widows are the only lasting results. Then there is a change of wind which makes it better to tack and move away from the French coast. Wouldn’t it be nice if the problems the earth is facing ran into a similar peaceful change of wind??