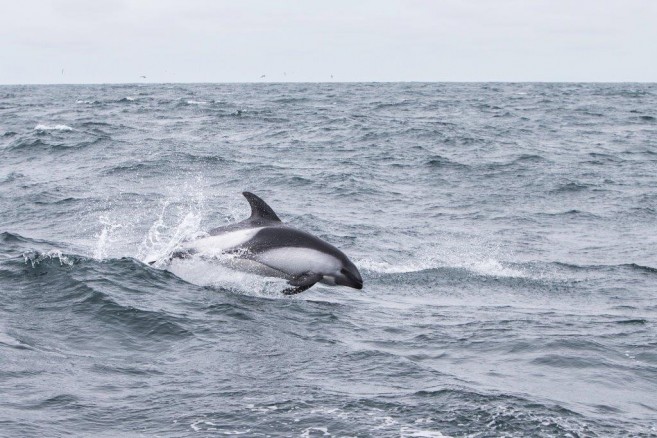 During a busy night watch, all our canvas is set and the engines that had been roaring yesterday, are finally stopped. Before dawn, the Europa sails on a 210º course at about 4 to 5kn, braced on Port Tack.

The wind had been veering gradually until becoming E-ly for the whole day long, blowing a fair breeze of 10 to 12kn.

After a gorgeous sunrise, voyage crew got more instructions about the Square sails, How they work and the ropes they have, afterwards having a practical session on deck striking and setting again the Lower Topsails.

Along the day the wind gradually picked up, increasing to about 20kn East by South until midday, when the Main Skysail is furled, while the rest of sails remain set. Buy that time Europa picks up speed  to a maximum of 9kn. We ran all day at over 6.5kn of speed on a course straight to NW Falklands.

The wind is expected to back again and become N-ly and also increase a bit on force, so we still hope for fair winds during the next days, allowing to keep going on our fantastic sailing.

During the last 24h, from noon to noon, we have covered 120nm, at an average of 5kn, and with this we are about to reach half of the way from Montevideo to Falkland Islands.

Eventhough we are quite far from land (about 120nm from the area of Peninsula Valdés, in Argentinean Patagonia), countless coastal birds such Kelp gulls, accompany us for almost all day, together with large numbers of Black browed albatrosses and Giant petrels. Several White chinned, Cape and Wilson storm petrels are also seen flying around the Europa.

This increase on the number of birds can be related to several circumstances. First of all we are on a fair windfield, good enough for them to keep flying and gliding with not much trouble. Then also many fishing boats are operating in the area. Seabirds use to fly around them feeding on the by-catch that is thrown overboard, and they are also attracted by the bait on the long line fisheries. Clever as they can be, they check all the ships around expecting them to be one of those fishing boats.

There are a couple more reasons why all those birds seem to follow the ship. As we sail along, we break the general windfield, creating an apparent wind that can be used by them for their gliding flight on the direction that hey prefer to go. Furthermore, as we advance over the water, we keep creating turbulence that can bring to surface any kind of nourishment that is a few metres deep. All those birds feed on surface and they are not really good divers, taking advantage of this process.

There is another interesting fact that relates with the large number of Kelp gulls visiting us. Those gulls are very common in this area. As we sail offshore in front of Peninsula Valdés, great numbers of them are around the main city of the area, around Puerto Madryn, due to their open air garbage dump. The increasing number of tourists since a few years ago is also increasing the amount of waste. The gulls take advantage of this availability of food. Since Peninsula Valdés is a main breeding area for Southern Right whales, the Kelp gulls have learned to land on their backs and peak them, producing injuries on them and even changing their surfacing behaviour. Nowadays they use to spend so much time logging in the surface as before.

Those waters are rich on fish, and besides birds and fishermen they also attract dolphins, and during the day we kept having quick sights of  Peale’s dolphins approaching the ship. Besides the Peale’s, Dusky and Commerson’s are common from here to Falklands, preferring the latest species the coastal waters.