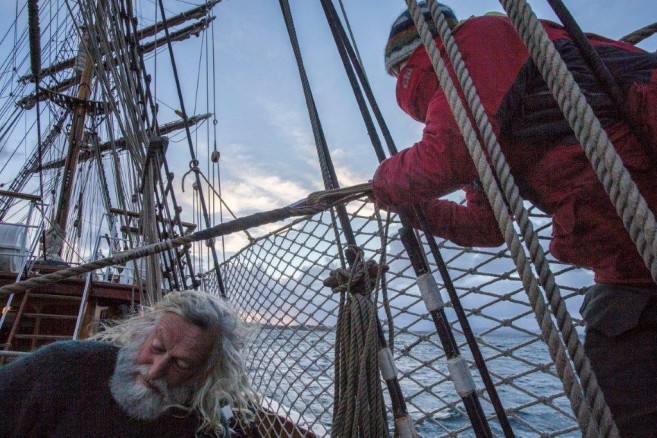 Europa holds her ground at anchor in Williams bay during the whole day. Winds of increasing force swept over the Falkland Islands, reaching 40 and gusting up to 45kn. On  those conditions, we better wait at anchor for an improvement on the general situation to set sail and start our way to South Georgia. It was not until after dinner when it all looked better to venture our departure for a great sailing adventure. Stormy seas await for us on our way to South Georgia, and great expectations and excitement hoovers over all of us during the pre-departure hours.

The day was spent preparing the ship to brave the “Furious fifties”, latitudes renown by their strong winds and fierce seas. The Permanent crew is long hours busy, sea fastening the ship and enduring the harsh conditions on deck to get all ready for the later announced departure. Zodiacs are stowed away to let the Sloop-deck free, for easier sailhandling, and Storm sails are bended on, in case they are needed in tempestuous conditions. Safety nets and lines are rigged along the decks. In the meantime our Mate Fosse gives a safety talk for all voyage crew and gives the hints on how to face the next days riding the wild South Atlantic. The afternoon was spent adding Sail-training reminders and information for all of us.

A bit later on, when we all got our evening meal, the Captain takes the decision of departing as soon as everything is ready for it. The wind has decreased to about 20kn, but sure big swell install rolling out at sea. For the moment we take advantage of the improvement on the conditions even though more Low Pressure Systems seem to be lining up to pass over the area between Falklands and South Georgia.

Around 22:00h the awaiting was over, and soon we start heaving anchor, after already have unfurled the Top-Sails, Fore-top mast Staysail, Inner Jib, Dekzwabber, the small Aap that replaces the larger Desmond on the Main deck, and the Spanker on the Mizzen Mast.

We sail straight away from the hook, with many of us on deck pulling Sheets, Halyards, letting go Buntlines and Clues, under the supervision of the permanent crew. When we get off Williams bay, our refuge for the last day, towards the open waters, both Courses are also set. The Voyage Crew watches start, with the new people that embarked in Port Stanley mixed up with the rest, that have been on board already for over two weeks. New faces to know, new stories to tell and lots tolerant from each other. Under 20 to 25kn of SW-ly winds, soon the Europa sails again at 7 to 8kn, on a course that will bring us in a few days to the untamed coasts of South Georgia Island.