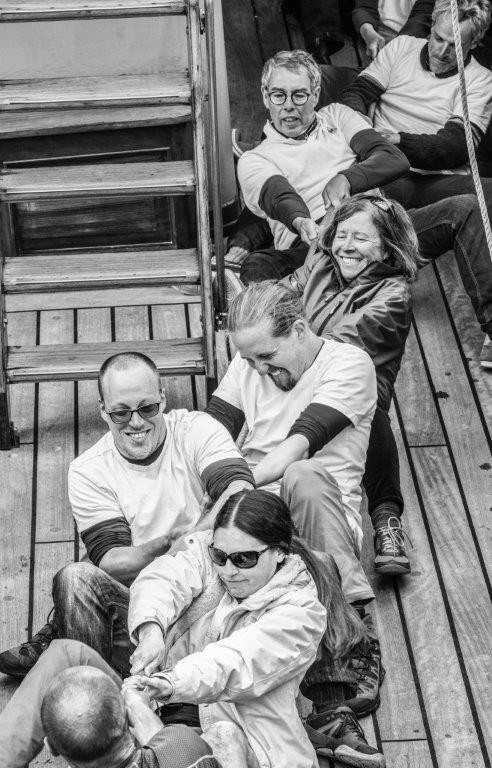 For about a week we have been making good progress under sail, but already yesterday the wind started to decrease, making for adding Studding sails to our rig. Under sail and later with the help of this extra canvas we covered about 120nm in 24h. But during the night light airs from the aft were not enough to give us speeds over 2 to 3kn and the engines had to be turned on to keep a bit better pace of 5 to 6kn.
Studding sails are packed again, Courses, Royals and Top gallants clewed up, Spanker also stowed away. Later during the first hours of the day Top Gallants and Royals are furled and later on we also strike the Top Sails. From then on our two Caterpillar 365hp engines push us through calm waters during the whole journey, with just Lower Staysails set. How different it is nowadays from the past times when the ships lack engines and had to rely completely on the wind for their journeys, some of them lasting for years. Not just the winds and bad seas affected the 15th century sailors and traders, but also if they found themselves close to the area where we are at this moment, their ships had to deal with the influence of the Agulhas Current. With its strong flow it makes its way southwards along East Africa and when reaching South Africa and the Atlantic Ocean, confronting its strong West to East current, turns back to the Indian Ocean. This frontal area along the meeting edge of those major currents is characterised by the numerous eddies released from Agulhas into the South Atlantic. Being on the appropriate side of those eddies is important for the sailing and navigation, as the strength of their flow can be of a couple to three knots. We too have to start checking their evolution, but unlike in the old times, nowadays satellite technology and computers can give us an accurate idea about the currents, their characteristics and movements. By the evening it was time for bracing sharp on Starboard tack to place the yards parallel to the 5 kn of breeze, as we steer on a 060º course on a more or less straight line to Cape Town. It looks like on days like today, easily motoring our sunny way and just a few days from our final destination, for many the feeling is of being on an easy after-expedition homebound trip. Expectation and excitement for arrival loiters over their heads checking the speed and mileage several times a day. But the trip is not over and done yet. Still, with over 610nm of open oceanic waters ahead of us, we will have to face more weather changes, meandering oceanographic currents and sure shifting winds that hopefully will allow us once more to spread Europa’s canvas and cover some distance under sail. At the same time, getting closer to South Africa, the lookouts gradually report an increasing number of ships passing by. Bit by bit we are getting into shipping lines of fishing and cargo vessels, carrying their good to the busy ports of South Africa or sailing from the Atlantic into the Indian Ocean. Some of them even make small detours to have a look at the unusual sight of a classical Tall Ship sailing these waters.
The almost flat seas, good weather and lack of wind, resulting on a comfortable ride, gave a good chance for gathering all watches on deck, plus a selected team of the Permanent crew for the most expected “Europa inter-watches competition”. During last days many have been walking around the ship with the pin-rail diagram in hand, trying to make their way through the maze of ropes and lines that we have been pulling for the last weeks. And this afternoon the moment had arrived to put in practise our acquired rig knowledge. A funny and good way to show and refresh what we have learned so far on how to set sail, finding the appropriate pins and ropes, tie the right knots and try how our muscles have been trained along the way. First it all started with a pin-rail chase where a line (existent or not…) was called and a selection of crew members had to rush for it. Sounds easy but all teams were handicapped in one or another way, through having to carry the classical potato between the legs or placing a pin between two pairs of knees. Knot competition came after followed by a timed setting of the Dekzwabber, where the permanent crew team had to withstand the rigours of “hose and bucket squalls”. As a final exercise the White watch won the “tug of war” and with this proclaimed them the overall winners of the contest.
Once finished, everybody returned to their occupations and duties, while Phil, our professional photographer fellow voyage crew moved his computer to the Lounge to do a talk on African Wildlife photography. His presentation not just showed beautiful pictures but also how he is collaborating with conservation projects on Cheetah, one of the most endangered species of African felines. Not just their small numbers and low breeding success but also their small genetic variability after a bottleneck most probably produced during the last glacial period, makes of them a beautiful but complex and difficult subject for Conservation projects.