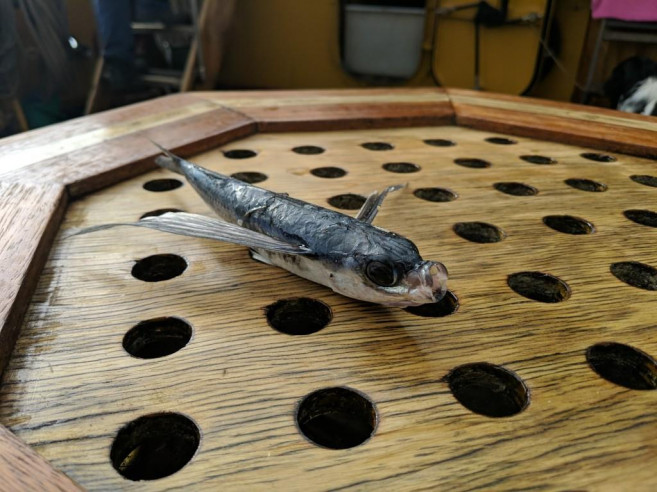 Apologies for extended periods of silence.

The further along we move in time and miles, the more land and its business fade into some distant memory.
Life on board, inspite of its “simplicity“ or maybe because - leaves little room for remembering what one thought one would or could miss. Except for chocolate maybe. But even that thought only surfaces occasionally; the cooks make sure of that.

Thanks to some statistical mishap we are eating birthday cake about every second day.
Today we even had two birthdays! It's great!

The watches are ticking along, morning, night, coffee time, dinner, birthday cake.
We have made it to the Northern Hemisphere, and after some bargaining and suitable punishment all our pollywogs have been accepted as shellbacks.

The stunsails are long packed away for our Northern setting: sailing close hauled, following the wind around the Azores High.
If you look at our track you might be thinking we mixed up our East and West. But with sailing as with so many other things in life the best route is not always the straight line.

Speaking of straight lines and routes, here is a little story out of the life of a mate on board the Bark Europa and a flying fish who recently learned above lesson:

The day before Neptune's visit  I had an unexpected visitor in my cabin.

I just so happened to notice it out of the corner of my eye as I was fetching my laptop for some secret Neptune business, thinking that it did smell a bit fishy in my cabin, somehow.
But then it had been smelling more than just a bit fishy in several places on board for a few days, for reasons I as a shellback am not able to disclose.

However, so far the smell had not ventured to my cabin.
And then I saw it. Behind the door. The fish.
Yes, a living, flapping, decent sized fish. In my cabin!
My surprise was probably nothing compared to that of the flying fish.

Imagine that:  One second gliding like a bird through the air, with nothing but thousands of miles of ocean around you and sky above you. Next minute inside a cabin! Solid wood. No sky. Worst of all: no ocean.

I must admit I first suspected a pollywog prank, seen that deckhand Aske had been mopping his way past my cabin not a minute before. But he convincingly swore innocence.

I put down my laptop and removed the fish. It was still beautifully blue, pretty solid 20-25cm long, and not at all slippery or slimy. Flying fish are quite wonderous creatures. For those of you who aren't sure: They do exist. And do a pretty good job at flying. Good enough to somehow make it into my cabin. The question is:  Just HOW did the fish get in?

At this point I should probably mention that the mate's cabin has the luxury of three port holes, all of which can open: One in the bathroom, one above the bunk. And one opposite the door.

The fish must have come through the porthole, one should think. Yet the one opposite the fish's landing was closed at the time. The one above my pillow, however, was wide open. A sudden vision of flying fish suffocating in my bunk made me hasten back to my cabin.

I rummaged through bedding, looked under the pillows: no further clues or fish there.
The detective work had to be continued.

Back to fish's landing: A trail of little scales, stuck to the deck behind the door. The tip of a wing just beyond the bathroom door. A single scale on the bathroom bin. A splash of water on the bathroom tiles, exactly opposite the porthole.

After thorough investigation and due consideration of all clues I conclude:

While a certain flying fish was having a good straight glide at 4 48 N 26 40 W, a mate's bathroom porthole managed to locate itself en route of said fish, followed directly by a wall of white tiles.

Whereupon the flight of the fish was ended abruptly, gravity took over and launched the by then semi conscious fish towards the bin with sufficient momentum for it to bounce off,  make it out of the bathroom and then slither and slide its way leeward, until wall, door and closet of the cabin made further progress impossible.