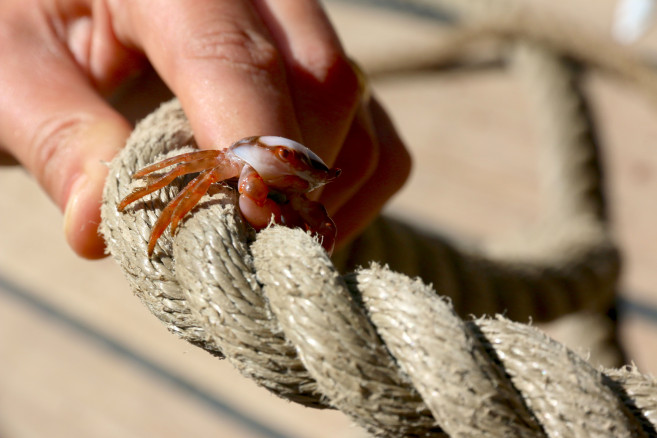 8 days Out of Horta

At half past 3 we noticed a red coloured fender/buoy and with an ocean depth of more 4,500 meter we could assume that it was free floating. We made a U turn and brought the fishing buoy alongside.

The fishing buoy still had about 2 meter of line attached to it but on the line was a colony of barnacles growing. The whole colony was weighing about 40kg and it took us quite a bit of effort to get in on deck. In between the barnacles we found little crabs and we noticed also fish swimming around the colony when we retrieved it. You really getting a double feeling it you think you free the ocean from some lost plastic but at the same time you kill a whole colony of life forms that took advantage of this little floating reef.

Not long after that a gentle breeze from the Southwest surprised us and we hoisted al our sails again and slowly the speed was growing from 2 to 5,5 knots  and making us happy again.

During the evening this breeze kept us going in a favourable direction but during the night we had to brace sharp to Port tack again and we had periods with stars and periods with drizzle.