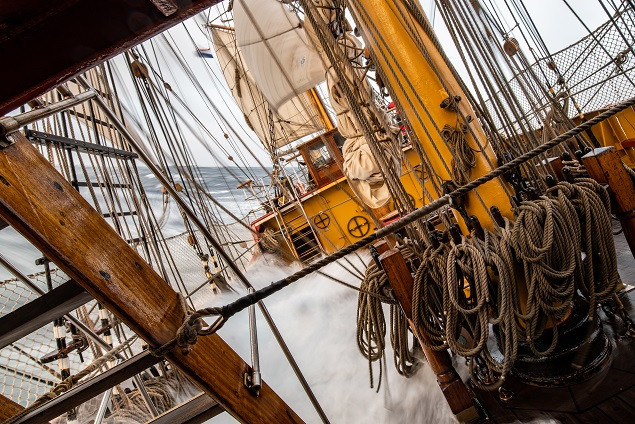 Untamed seas and howling winds to the full moon. During the night the forecasted ocean uproar burst upon the Europa in fury that just gets accentuated at sunrise. Heeling heavily to Starboard side sailing Close-Hauled, now and then decks are buried from sight under waves of water.

While in the early morning she is shaken to the keel by the blustery NW winds and swells, some daring hands gather on deck to douse the Main Upper Topsail. Yard comes down easily as downhauls are pulled tight, Buntlines require a good effort to be properly hauled while the sail still seems to want to fill up its belly with the gusting 45kn of wind. Soon gaskets are put around the canvas and yard, leaving the ship to sail under Courses, Main Lower Topsail, and both of them in the Fore Mast. Down below Lower Staysails catch the wind. At the back the Spanker and in front Inner Jib and Fore Top Mast Staysail.

Here, between the 40 and 50 degrees of latitude South, westerly winds generally blow hard, originated by the combination of air being displaced from the Equator towards the South Pole, the Earth's rotation, and the scarcity of landmasses to serve as windbreaks. Though legendary as well, the 50º and 60º latitudes, where the wind can even blow harder, are not so famed since they are less used by sailing ships on Oceanic Crossings.

Further South sea ice grows and melts at an annual rhythm, working as an engine for the deep ocean circulation. On the surface, the Circumpolar Current drives the waters. Thermal and salinity boundaries separate water masses and the plants and animals capable of living on them. The Ocean is not a uniform environment and that’s the watery world we sail and live in. Hot Oceanic crossings at low latitudes to the icy Antarctica; Equatorial calms and tropical squalls; the stillness of the Doldrums or battling the Roaring Forties and the Furious Fifties. On our bow, twin gorgeous Europa sisters ride the mighty Zeus white bull along voyages, schedules, and plans tuned to those seasonal changes and characteristics of the environment.

Now she finds herself sailing hard on a North-easterly direction, heeling and rolling on the big swell, waves breaking upon her, her Main deck often awash dealing with the roars and howls of the 40º latitudes. Cape Town as her destination, Tristan da Cunha on her way.