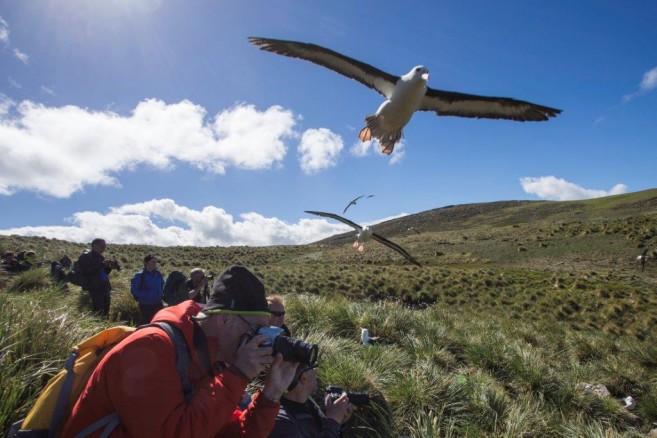 Windy night was over, leaving behind calm seas and light breeze, blowing under partially cloudy skies and sunshine. Right by the start of breakfast we moved the Europa the short distance that separates Grave Cove from the settlement at West Point Island. Dropping anchor at the bay, we could see the little settlement owned by the Napier family since 1959. Roddy and his wife Lily run the place as a traditional sheep farm, but due to their advanced age, they leased the island and the farm to Adam and his wife (both came to receive and welcome us at the settlement jetty) and is them now who take care of the place. They are all representatives of an independent way of life that is slowly disappearing from the Falklands. Anyway we have met already people that chose this kind of life on other landings we already did, balancing farming and nature conservation.

On this sunny morning we landed at a concrete jetty and soon started our visit to this fantastic island. While ashore, the local residents had a tour on board our lovely Europa that we are so fond of and arises interest everywhere she makes port or drops anchor. They own the only picture there is of the Barquentine “Thetis”, of 305 Tones, lost in 1901 without a trace North of Falklands leaving a count of 21 lost crew, and they wanted to show it to our Captain Klaas and also have a look around our ship.

On land, the small hike is an easy walk of about 2 km over grazed grassy slopes and turf, in a sort of plant carpet. It brought us from the settlement bay at the West coast of the island, to the cliffs at its Eastern side, with the appealing name of “Devil’s Nose”.

Great scenery and concentration of wildlife awaited for us at the end of the trail. Amongst the tussock grass many Black-browed albatrosses nest mixed with Rockhopper penguins. At this site, poles in the way of a basic fence mark the maximum approach distance we can have to their nests, and indeed it was close, we could all sit in silence and enjoy the show right next to the abundant birdlife. Elegant albatrosses and noisy penguins shared the space, sitting on their eggs, while others whoosh just over our heads on their flights on and off the colony.

As small ship dealing with about 30 people, after quietly enjoying this first nesting site, we could walk all the way to Devil’s Nose, the quartzite cliffs adorned by the colourful orange lichens and patches of tussock grass. There many more albatrosses sit on their nests and below our feet a male sea lion rest next to his small harem of two females. The scene is astounding, and having a sunny warm day helps all of us to greatly enjoy this nature’s bounty. The area is home for over 2000 pairs of Black browed albatrosses plus about 500 couples of Rockhopper penguins, amongst many other species of birds.

We all sit over the rocks for a while gazing at the rocky hill of Devil’s Nose, that drops straight into the sea as an addition to the continuous spectacular coastline of steep cliffs. Time flies when visiting sites like this one, and soon we had to start leaving, re-tracing our steps back to the settlement to be picked up by the zodiacs. A great morning spent in one of the most breathtaking corners in the Falklands.

Once on board, Klaas and Jordi had a brief talk about this afternoon plans, because a tourist ship carrying over 90 passengers will land at the spot we had in mind. Actually we want to give a second try at Saunders Islands, same spot that we had to cancel a couple of days ago due to the strong winds and surge at the beach. An agreement is reached with the other vessel and we will try our luck later on, this time after an early dinner when they will leave the area.

But not all was done yet for the rest of the afternoon, gentle breeze from the WNW gives the Captain the idea of a quiet sailing afternoon as we approach Saunders. Taking advantage of it, straight after lunch many hands are up the rig and on deck getting all ready to set sail. And indeed soon we started, even getting off the hook under sail. Pretty hectic on deck at the beginning, trying to follow carefully the instructions yelled by the Captain, mostly about the sequence of sails to set, how and when to perform such manoeuvre. We keep the engines on Standby just in case any mistake or wind blow could push us against the rocky and shallow coastline.

As soon as we turn around the ship and head off the harbour, we see the sails starting to back, moment when some push from the engines is needed until we brace properly. Many of us were on deck during the operation and sailhandling, busy at the start changing course around the island’s tip to Boxwood Point to get to the open waters and have an appropriate heading Eastwards towards The Neck, at Saunders Island. Practically all our canvas is set, sailing between Broad reach and downwind. Just the Main Course remains furled not to shadow the sails set in the front, Fore Top Mast Staysail and the Deckzbabber that is on deck in repair. Later on we set just the Starboardside of the Main Course, and drop the Desmond, leaving a gap for the wind to run through and still fill the sails at the Fore Mast.

Passing button Island, half way between West Point and Saunders, we change course more to the ENE to head straight to The Neck, bracing sharper accordingly and setting the rest of sails. With this and a little increase on the NEW-ly wind, blowing now between 12 and 13kn, we gain speed and from the 3 knots we were doing until now, we start sailing at around 5kn getting closer to Saunders island.

There still lays at anchor the tourist cruise ship “Island Sky” finishing their operations. In great style we sail around them dropping anchor under sail. All available personnel was on deck carefully following the Captain’s instructions to drop sails in a studied sequence, first to drop our speed, then to turn into the wind and finally to stop the ship with backing Main Topsail before letting the anchor go. It all ended up successfully in a very effective and elegant fashion. Finishing our manoeuvre just when the Island Sky went off.

Early dinner was ready and soon afterwards all was prepared for us to go ashore. This time we could all successfully land, on much better conditions than our first attempt under the strong winds from a couple of days ago. The landingsite is known as The Neck, on Saunders Island, that was named after Admiral Sir Charles Saunders, who sailed around the world with Lord Anson in 1740. After this voyage they recommended the establishment of a settlement here. Tourism is becoming increasingly important but sheep farming is still the core of the island’s economy. Nowadays 6000 sheep graze over the pastures of Saunders, sharing the terrain with penguins, albatrosses and many other bird species besides the occasional Sea lions.

On land, the local people Tony and his wife welcomed us, and actually guided us to the wildlife highlights around The Neck. On this narrow and low sandy isthmus we could find one of the most spectacular wildlife-viewing places in the Falklands. Several species can be seen on the way from the Neck towards the East, following the long beach and then climbing uphill to the top of the low-lying cliffs. On the lower areas Gentoo penguins are abundant. There, a fence keeps visitors at the appropriate distance from a small group of breeding King penguins. As we climb uphill there we find a large colony of Rockhopper penguins. During the hike, we cross over areas occupied by Magellanic penguins as well.

There is a small cabin closeby where tourists groups can stay for a few days. Today a group of well known Spanish photographers were here, planning to spend three days taking pictures of the amazing surroundings and their inhabitants. When the sun set, and after a couple of hours enjoying the great low light of the evening over the scenery, it was time to head back to the ship. Europa lays at anchor waiting for us over flat seas and almost windless conditions, but eager to sail overnight to bring us to Port Stanley, where we plan to finish the first leg of the trip. First we had to motor over the first few miles until finding some fair winds to set some sails.