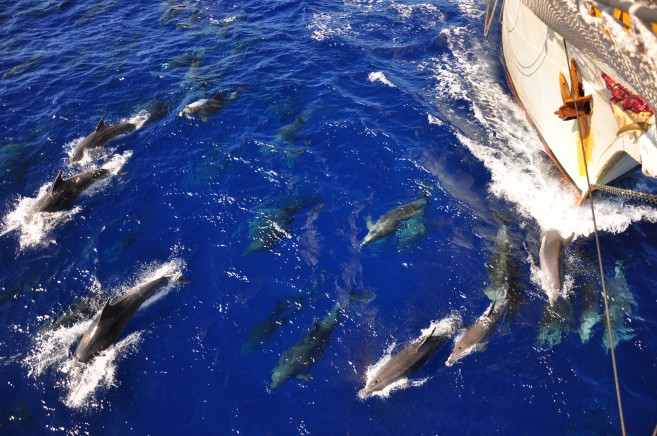 We left Las Palmas, Canaries over a month ago and had a continued fabulous sail south to Cape Verde where we had 24 hours lay over. We are at these latitudes in the north east trade winds area but not yet the tropics. Cape Verdes was an experience of different cultures mostly African influenced and a bit of a culture shock. The trade winds blow at a consistent force 4 to 5 occasionally stronger but nice and steadily from the NE. Then a 3 week plus voyage across the equator to Salvador. We came quickly out of Port Mindelo Cape Verde where a vortex effect between the islands took us up to 12 knots at one point for a short period. Then settled down to a nice steady 8 knots still in the trades crossing into the tropics at Cancer 22.5 degrees north.

good humour and good fun on board

Into the doldrums where no wind meant that we had to motor for two full days. We stopped for swimming several times where we are bathing in clear, clean warm waters, air temp approx 27 degrees and the sea about the same. After the motoring bit we again picked up trade winds this time from the south east although they were a bit more fluctuating in direction this time. However, we got a great blow from the east and sailed beautifully on until we reached Salvador or Bahia as some people name it. A lovely 3 week sail with good humour and good fun on board. Warm steady breezes across the hot teak deck make for good smiley happy people all round. Through the pleasure of the sailing, being on board and sharing a happy time getting to know new people it was smiles all round. Tans were getting deeper, wind blown hair music in the evening air and a drink from the hospitable bar man (for those not on watch). New friendships being formed and humour exchanged.

No supermarket out on the ocean

It always amazes me that 45 people can be fed 3 times per day for 3 weeks plus with no recourse to land support. (No supermarket out on the ocean). We were all separately taken on a very informative and passionate tour of the food and drink storage facility that Rensje the ships star turn in the galley has presided over for some 20 years bringing her wealth of experience to what is effectively a small but never the less demanding environment. To turn out good quality food from the heat of the galley on a regular basis can only be applauded. We had 5 days stop in Salvador for re fuelling, change crew, maintenance for the full time crew and sightseeing for the visiting crew.

The town of 3 million plus people is a bit in need of more development and in some parts a face lift. The yacht club which we were anchored outside was very much one of the better facilities we visited with its large terraces, bar area and Olympic size swimming pool. It gets full use by the locals on Sundays the rest of the time we had it very much to ourselves. The restaurant here was very good by any standards you choose to judge. Some of the restaurants in the historical centre (Pelhourino) were variable. The area was worth a visit but I have now visited enough Churches to be taken to a higher place in the religious world. We are now headed for Punta Arenas south down the coast of Brazil.