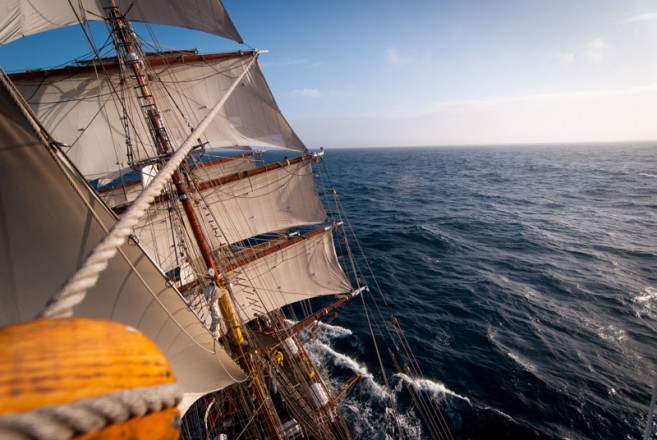 The Hitch Hiker's Guide to the Galaxy begins "Space is big, seriously mind-bogglingly, big.." and I thought I understood the concept as I live in Australia where popping out to see the neighbours can involve a 100 km drive. But the Southern Atlantic has turned that idea on it's head.

Sailing for well over a week now we still have hundreds of nautical miles to go before we reach South Georgia. We are surrounded by sea and more sea, sitting in the middle of a perfect circle covering more than 300 square kilometres with not a boat or a plane in sight for days. Our companions are the seabirds; Albatrosses and Petrels, supreme masters of their environment who glide endlessly, just skimming the wave tops. So efficient are they that they use only the same amount of energy flying as sitting on the nest and, to us, their movement are imperceptible as they make the tiny adjustments needed wheel and dip. Dolphins have been curious, they play in our bow wave surfing joyfully and competing with each other like the grommets off Manly beach back home. At night, our circle reduces to just a few square metres and the birds become ghosts in light from the wheelhouse windows.

If it sometimes feels isolated for us, then what must it have felt like for the early sailors; Magellan, Drake and those who followed? We have short wave radio and can post blogs and receive phone calls via satellites, but until the introduction of radio the explorerers were truly cut off from the rest of the world. In 1917 one of Shakleton's first questions when he reached the whaling station on South Georgia was "Has the war finished yet?" Imagine his disappointment at the answer.

Our own feelings of being far from anywhere are magnified when the wind climbs to a gale and the Europa is climbing liquid mountains and thrashing down the far sides, rolling from side to side in a parody of fair ground fun which leaves many people green and miserable, though thankfully not me. We are reliant on our own resources and those of the magnificent permanent crew who are fearless up the mast and incomparable in the galley. If we are finding out new things about ourselves in the process - that can be expected as this is truly life on the edge of the world where the old maps claimed "Here be dragons..." Am I loving it? Absolutely. Would I do it again? Like a shot. And we have only just begun our adventure.