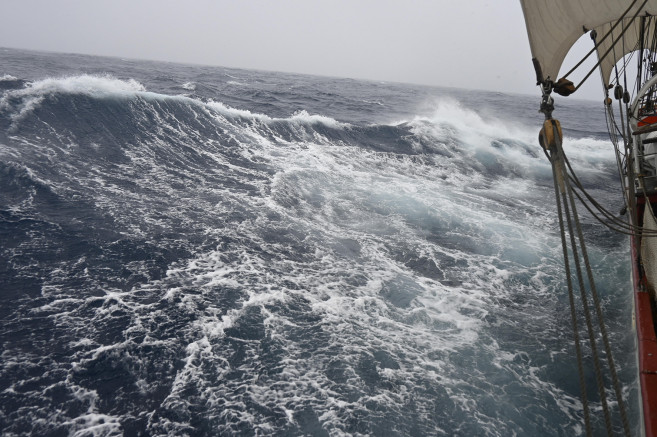 Of course the passage wouldn’t be the same if Drake didn’t show a bit his teeth.

Relatively easy going until last night, the wind picking up and the rising swells made for busy sail handling watches since the dawn of the new day.

Over steady 40kn, often gusting 45 and blowing occasionally at 50kn, the ship heels and rolls, water washes over main deck and breezeways. Zeus and her beautiful Europa, proud and mythical figurehead hanging over the ship’s bow, have a good battering while she breaks the high waves that splash over the fore deck.

Crew fights on, pulling clews, bunts and downhauls, dousing sail before grabbing the cold steel of the shrouds to climb aloft to quickly furl them. Reducing sail, gradually Outer jib, Middle staysails come down. During the early morning watch change with all hands available Courses are clewed up and stowed too.

Braving the storm, in the morning lands appears at sight while we sail fast towards the first islets and rocks that keep ducking and emerging from the swells in the horizon.

After days braving the rough waters of the Drake Passage, Europa has made it to the South Shetland Islands, gate to the Antarctic Continent.

Antarctica coasts and its furry and feathered inhabitants seem to be at our reach, but un-forbidding 30,35,40,50, gusts even close to the 60kn don’t stop blowing during the day. A good improvement on that situation will be necessary to be able to set foot ashore.

Under stormy NW-ly winds and large swell, the channel of choice to get through the South Shetland Islands is the Nelson, between the island of the same name and Robert. Straight in-between them from the Drake Passage to the Bransfield Strait, it allows for a straight navigation and for keeping sails set for longer than other more sinuous and shallower passages.

Not long after, Upper Top sails come down and the large Desmond is swapped by the smaller Aap over the Main deck. Lower Topsails pull us strong for a while longer at the Bransfield Strait before being packed. From there, by the late afternoon Europa tries to motor her way against the heavy weather to get into the English Strait. Leaving now Robert Island at Starboard she looks for a bit of shelter close to the slopes and glaciers crowned by steep mountains of Greenwich Island.Still a few more hours to go will bring her to the spectacular shores of Livingston Island, to drop anchor at her first destination in Antarctica, the picturesque Half Moon Island.

The craggy and hostile looks of the archipelago hasn’t changed much since the archives and modern historians compiled the first stories of their discovery from several 18th Century expeditions.

Apparently was in 1819 that William Smith found the South Shetland Islands. Islands and Continent that had eluded illustrious sailors like Captain Cook, who in 1772 managed to circumnavigate Antarctica without even seeing the continent. He sailed his two ships, Resolution and Adventure, as far south as 71° 10’ S between the Antarctic Bellingshausen and Amundsen Seas, but unfortunately didn’t sighted any land. Then, Cook centred his attention to South Georgia Island, landing there and making accurate maps and charts.

About 50 years later, the lucky one further south was the aforementioned Captain William Smith. Sailing the trading ship bearing his own name, he was blown off his route from Buenos Aires in Argentina to Valparaiso in Chile, reaching latitudes so far south as to catch sight of the South Shetland Islands. Once back from this adventure, he reported the existence of those legendary lands with their high abundance of seals and whales. By then he didn’t receive much credit about his stories or anybody who wanted to venture their fortunes in a doubtful expedition south. Nevertheless he managed to head there again, this time even managing to land at King George island. Now he raised the attention of the British Admiralty, which planned a new journey, now under the command of Captain Edward Bransfield. Another success that lead to the discovery of other lands and sea passages, and made for scheduling yet a fourth expedition, during which bringing back a good cargo of seal furs would repay for it.

Unbeknown to them was that the news of bountiful new lands further south had reached the ears of others in search of riches. At their arrival to South Shetlands they already found there more than forty British and American sealing vessels: the unknown discoverers of many sub-Antarctic and Antarctic places, often kept in secret not to let others know good hunting grounds.

Legendary lands that revealed today to us on all their harsh beauty, and where we plan to set foot whenever an improvement on the stormy weather will allow for it.

On board all is ready for it, preparations for arrival have been made despite the boisterous seas and raging winds. Mandatory Biosecurity procedures have taken place to try avoiding the introduction of seeds, mud or any dirt alien to the Antarctic system. All attended too the mandatory briefing of the “International Association of Antarctic Tour Operators (IAATO)”. A membership association that set up the rules and code of conduct for visitors ashore, to do safe and environmentally friendly touristic operations in Antarctica, in the frame of the Antarctic Treaty agreements.