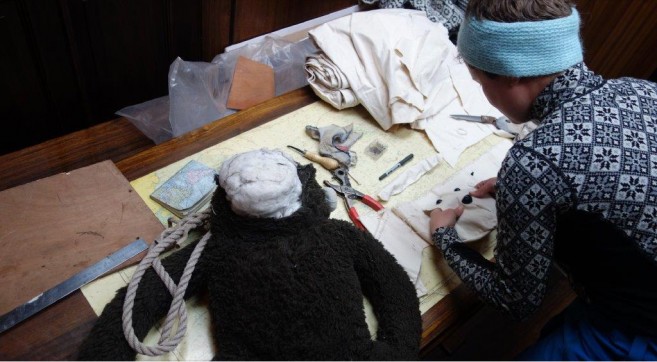 Desmond was the name of a Gorilla mascot that was first on the ship "Anna Rosa", a  Norwegian ketch. When the ship was sold to a museum the mascot was taken off and  brought to the Europa. He has been the ships mascot since 1994 when Europa first setsail. He is definitely the only monkey in the world who has a sail of a tall ship named after him. When the Europa purchased the new larger Aap (Dutch name for a monkey and the name of the mizzen staystail on a Barque), and rigged up beside the little old one, it was then christened Desmond after this famous Gorilla mascot whose 'son' you can see in the Deckhouse. The original mascot is now living in retirement in the home of one of Europa's Cooks, Rensje.

Since leaving homeport Scheveningen (The Netherlands), he has become a real globetrotter circumnavigating the globe multiple times and is likely to be the first monkey ever to have been to Antarctica and South Georgia. He has witnessed romance betweencrew members, has been cuddled, thrown around, used as a pillow and probably been vomited over many times. He even had a love affair with a blue haired Polish lady.

The hard life at sea has taken its toll on Desmond. His face got well-loved and was indesperate need for a facelift, particularly as his younger brother Aap (named  after the  sail) still looks nice and shiny. In December 2016 Sarah, our guide, came to the rescue.  On the picture you see Desmond lying on the operating table in the library, face off
and  with a beautiful new monkey face made of sail canvas; ready to be hugged and cuddled again and sail the oceans.

Now two years later all the hard work on the ship made his hands cracked and hurt… First aid was given by Mechelien, the ships doctor. A temporary solution, the diagnose is that he needs new hands… So we are waiting for a prostetic technican whose expertise it is to make beautiful hands for Desmond.

Based on a blog by Natalie Steins in 2016