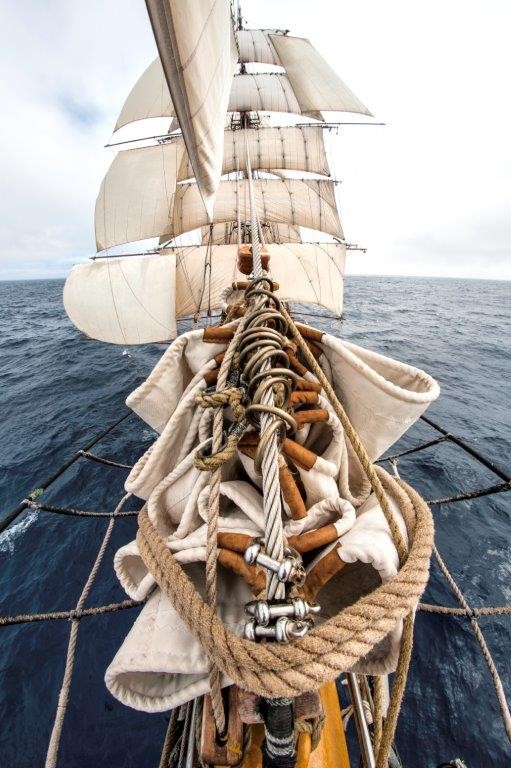 Early in the morning we are back to sailing downwind on a 080º course, as the light winds have been veering, coming now more from a westerly direction. As the breeze came down to around 10-20kn our speed also diminished to about 4kn. Even though we are doing this slow pace we are still slightly above the average 3.2kn needed to arrive to Cape Town on the 31st after lunch. Exact date and time of arrival is still not set, depending of course on the winds for the next couple of days, as we will try to do as much of our progress under sail. Unexpectedly in the early morning we had more wind than we thought we would have. Not just because of the several squalls that crossed our path but also due to the general wind becoming variable in strength (blowing between 12 and almost 20kn) and direction, turning more southerly. We keep following it as it keeps changing, steering between 045º and 060º doing a good speed of 6 to 7kn.

During the morning the wind even increased a bit to over 20kn. After a bit of bracing we sail over calm seas on broad reach, doing beyond 10kn of speed on a 10º more southwards course. All in all, quite a good and unforeseen morning of great sailing at a good speed, under blue skies and sunshine, with a temperature over 18ºC.

After our daily meeting once dinner was finished, we had the results of the second photo competition of the trip. On this occasion the winners were Det on the “Wildlife” category, Yann with his picture on the “Wet” category, then Stella in the “People” category and Vivien on the funny pictures of “finding Wolfgang”, our ever-bright orange dressed voyage crew during the landings and bad weather on deck. Also tonight we played a movie filmed on board the square rigger “Pamir”, with the title "The Last Sailing Ships", released in 1930 under the direction of Heinrich Hauser. The movie was shown as a special surprise for our voyage crew sailing with us on the beautiful bark “Europa”. The film was shown during our last night at sea, and was projected from the poop deck onto the Desmond sail under a starry sky.

Wish I was goung again, i would have to be on that ship. I'm now 88 and just can't do it. Enjoy every minute youngsters.