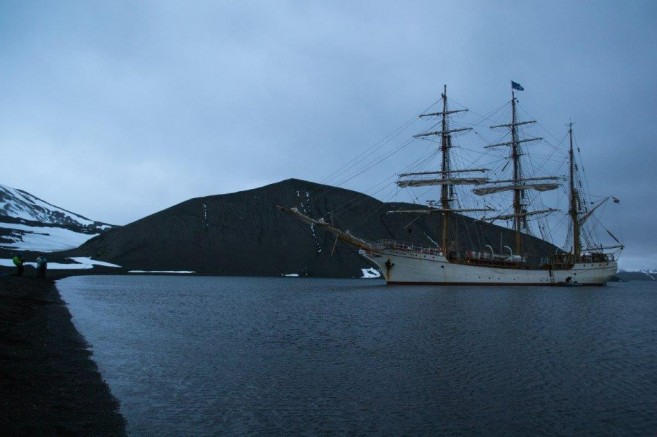 It was a monochrome day today. We visited three points on Deception Island (not a Point, a whole island) which is basically an island around an active volcano under the sea. On a map it looks like a doughnut where someone has taken a bite out of it. The first landing was at Whalers Bay, it used be a whaling station earlier in the 1930’s, now it stands as a heritage listed ghost town showing the devastation the volcano can actually cause on eruption. As we were walking around the bay, it felt like we were walking in a black and white photo, which included the few fur seals and chinstrap penguins that were in the vicinity. The only clue that indicated we weren’t in an Antarctic Art Noir film was the odd bright red or yellow jackets of our fellow voyage crew amongst the snow and black volcanic rock. There was a fur seal hiding in one of the old oil drums and growling at people as they walked past. I reckon he thought it was pretty funny to see our reactions. This was the first landing where there was a significant absence of wildlife. Two chinstrap penguins and three fur seals (other than our friend in the oil barrel) was all I could see in the bay. It’s thought the sulphur in the water deters animals from staying on the island too long. After lunch we went to Telefon Bay. The first thing I noticed was red seaweed along the shore. It immediately reminded me of War of the Worlds where they talk about the aliens red weed engulfing the planet. It was a noticeable shag of colour on the coast line in contrast to the
continuing monochrome landscape. The best way I can describe this bay, is to imagine the moon was made out of volcanic rock. Apart from the ocean and the Europa, it felt like we were walking on the edge of impressive moon craters.

After dinner was our final landing, Pendulum Point. The main purpose of this visit was to see if we could go swimming in volcanic waters. When we arrived, the tide was not high enough to get to the right point on the beach. This was where the heat was coming out of the volcano, and the ocean at high tide would flow above it cooling the area enough so those who swam in the waters wouldn’t boil. It seemed like a bit of a non-starter, then the group started digging troughs by the edge of the
water. We could see the steam coming out, but the wind was icy and no-one seemed too keen to strip down and jump in. That lasted for about three minutes where one by one people were jumping into the cold water first, then the makeshift troughs that were built. Seth resumed his fur seal antics rolling around in the trough, with me losing sanity long enough to jump into the cold water then join him in the trough. It was nuts, but when are you going to have a chance to do something like this again? You could really feel the heat coming through the ground. The ocean water truly was key to avoiding being boiled. One for the bucket
list I didn’t know I had! Tomorrow we land on Trinity Island. We are heading there now as again I’m sliding back and forth on the seat again while writing. Such is the creative process!

Good to hear from you. Glad you got to enjoy the thermal bath.