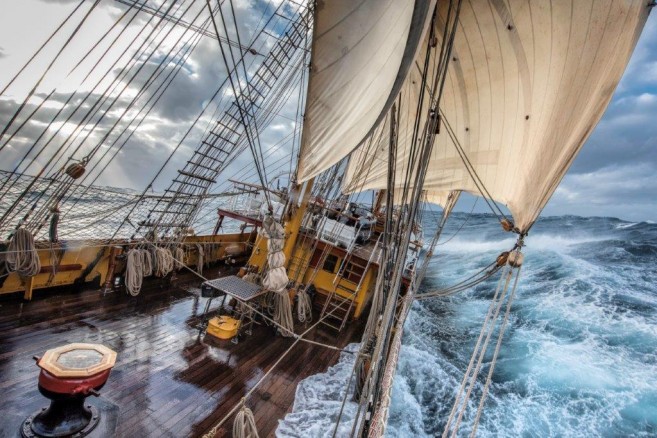 Another day in the Drake Passage that didn’t bring anything new regarding weather, wind and sea conditions. During the early morning the wind just veered slightly, blowing form WSW to W-ly. With the same sail configuration of lower staysails, jibs, courses, lower topsails and spanker we keep motorsailing as close to the wind as we can, not to let our course bend eastwards. The engines do their job keeping us on course at a speed of 6 to 7kn as Europa rides the wild seas, over the high swell generated further west and building
up on its way. The Antarctic Circumpolar Current and weather systems can run unimpeded around the world at the latitudes of the Drake Passage, carrying an important volume of water (estimated to be about 600 times as much as the Amazon River) and having an enormous area exposed to the wind and low pressure systems, that easily can grow huge seas. Today, by the hand of the crew member Martijn, we learned about the main world sailing routes that in the past took incredible struggles at sea and so many expeditions to discover, during his much anticipated talk on the global prevailing weather and wind systems. From the lecture lounge back on deck, the weather improved during the morning, and by lunch time, the sun was even shining between the clouds for a few minutes. At the same time the seas were abating and the W-y winds became more regular. Still with the help of the engines we keep a NW-ly course, but as passing half way through the Drake, it starts becoming clear that heading for Cape Horn will be a difficult matter. Now our course aims East of it and with the W and NW winds forecasted, better keep going pointing high into the wind and add more canvas. The upper topsails are quickly hoisted right after the morning break for coffee. Today, on our way North, amongst the stormy seas, we crossed the
Antarctic Convergence. From surface waters of about 1.2º C in the morning, by the evening it had increased to 3.3º C, as we cross from 58 to 57º S latitude. Our bumpy way has been of 156nm in the last 24h, and now just 176nm is left until reaching the Eastern entrance of the Beagle Channel.