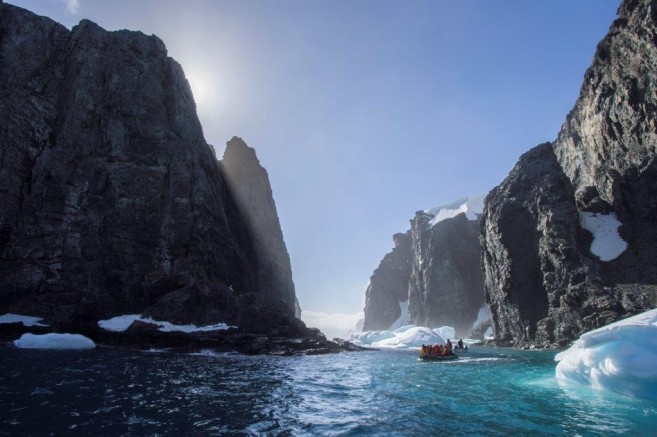 With the Europa sailing off Deception Island through the Neptune’s bellows, we say goodbye to a great day in the volcanic island and with that also to the South Shetland Islands. There we explored several stunning spots, teeming with wildlife. Soon we got enough of a fair breeze to start motorsailing Southwards along the Bransfield Strait. Lower and Middle Staysails, Fore Top Mast Staysail and Spanker are set, to help our engines and stabilize a bit the rolling of the ship on the long Bransfield swell. This body of water is about 100km wide, extending 300km in a ENE-WSW direction, and separates the South Shetlands from Trinity Peninsula and the Joinville Island group, off the N tip of the Antarctic Peninsula. This strait gets its name from Edward Bransfield who sailed here on 1820. Without getting much further South he turned around thinking it was a gulf. Many interesting areas are found within this sound. Amongst them is the Intercurrence group of islands. As planned, having good enough weather overnight, we found ourselves in the early morning rolling in the long Drake Passage swell that hits the western shores of this small archipelago. Indeed, the conditions were a bit too rough to drop zodiacs and cruise them, but instead we spent a couple of hours enjoying the amazing and wild beauty of the scenery and the plentiful Humpback whales feeding there. Busy as they were they allowed us to get as close as the jagged and uncharted sea bottom allowed, occasionally becoming interested by our beautiful ship. Everybody was on deck under the great light of the new promising new day, as the sun rose into blue skies, while the whales repeatedly showed their flukes on their shallow dives. At the background, the swell crashing against the toothed cliffs of the island fills the surface of the ocean with haze. Our next destination, the channels between Trinity and Spert Islands, lays 12nm away, and after breakfast we need to start our way. There we plan to cruise amongst icebergs and mighty basaltic cliffs. But not before stopping for a while close to the first great iceberg of our trip. Not much later boats were launched and with half of the voyage crew we started the cruise that brought us to explore the narrow passages between rocky crags and the countless little bays between them, all filled up with icebergs of any kind, size and color. While Europa has been visiting the place for many years, poorly charted waters and difficult navigation due to the numerous shallows around might contribute to the fact that not many other ships use this spot,
although nowadays more of them are getting to know it. Anyway, the area was first mapped by the Swedish Antarctic Expedition under Nordenskjöld between the years 1901-04.
A wide channel that traps drifting icebergs act as a magnet for our zodiacs as they cruise. The rocky shores are crowded with Fur seals, packed in the narrow beach areas amongst unstable glacier fronts. There we had the first sights of a Leopard seal in its usual environment, resting on top of an ice floe. Drivers slowly approach the magnificent animal just to discover a second one swimming around and eventually jumping onto another iceberg further away. Their reptilian look, slim body shape, huge mouth and head, and long flippers adapted for good maneuverability, makes them really graceful animals. And with their sharp teeth, well-armed for predation as well. Rounding the neighbor rocks and bergy bits, two Weddell seals snooze on the ice, allowing for good in-situ comparisons and identification features between both species.
Excitement built up as we kept going on our way, driving through narrow passages between high dark cliffs, filled up with beautiful icebergs and spiced with the swell crashing against them. Before turning back and making our way to the Europa, we found a quiet spot amongst the wild environment where we tie up the three boats together. Time for a little break to enjoy the roughness of the setting while relishing on a nice cup of hot chocolate, before carrying on to where Europa lay at anchor. There we are welcomed by a lunch prepared on deck, taking advantage of the good weather conditions. The sunny morning didn’t last much longer and low clouds were quickly taking over the blue skies. Time for the second group of us to join the boats and do a similar cruise. This one with the anecdote of a Sloopy engine malfunction, needing a tow for part of the afternoon adventure in the recondite channels between Spert and Trinity Islands, a spectacular place of untamed nature.

Straight away Europa heaves anchor heading now to Cierva Cove, in Huges Bay, where we plan to have a look from the ship during the evening. There is time enough in the afternoon to attend the photographer Daniil’s presentation on tips and workflow in Lightroom, a powerful post processing photo-software. Soon after diner, we arrive to the amazing Cierva Cove, framed at its head by the superb Brequet Glacier. Lucky enough it seems that lately it has been pretty active calving, and large parts of the bay are filled up with icebergs and brash ice. As we pass through it, many of us climb the rig for a better view, others have a good time on deck, while the sun sets making a perfect end for another good day in Antarctica.