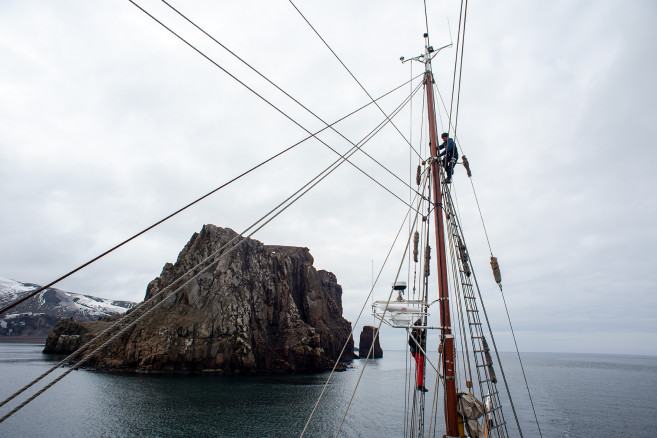 Strong headwinds and swell were with us during our way overnight from the Mc Farlane Strait to Deception Island, making our progress under engine slow. Nevertheless, already from the early morning we could have the first views of this volcanic ring-shaped island.

The descriptive name of Deception dates back to at least 1821, with an origin that remains a mystery, though some tried to relate it with several circumstances specific to the island: It is famous for its beauty and rich history, but also for its foul weather. As an active volcano, its shores are warm, often steaming with sulphurous fumes, feature that creates its own weather, frequently hiding the high hills and mountains up to 540m behind a veil of clouds. Also while Port Foster (the inner harbour of the caldera) seems to offer a good shelter, the winds sometimes can blow over the surrounding mountains, shooting down to the sea level again with great force. Furthermore, it is not an easy task to steer the ship through Neptune’s Bellows, the only narrow gate to the inner caldera of the island. Coming into the flooded volcano means sailing close to the cliffs of Cathedral Craggs right on our Starboardside, while on Port large shallows extend to the Southern shores of the entrance. In the middle, the infamous Ravn’s Rock is barely submerged, representing a hazard for navigation, and has already damaged several ships and even sinking some. As a witness to this dangers, the Southern Huntress, wrecked here in 1957 is still showing parts of her bow amongst the orange rocks at the beach.

Some of the inner beaches around Port Foster are still steaming and warm, and although it could be much appreciated by visitors, is not the best piece of cake for the antarctic inhabitants, making of these shores famous for the scarcity of wildlife. A different story is if we look at the exposed and difficult to reach outer coasts, home for several busy Chinstrap penguin colonies. Underwater the flora and fauna is abundant. There,  polichaetes, sponges, sea urchins, sea stars and brittle stars thrive.

Once getting through the bellows under the masterful steering of our Captain, withstanding winds gusting now and then over 45kn, still a handful of miles are left until arriving to the first planned landing for the morning, the picturesque Telefon Bay.

Not long after having a good breakfast, Europa is already positioned in front of the small Gonzalez Harbour, ready to launch the rubber boats while drifting and manoeuvring in the still blowing harsh winds. A short landing briefing preceded yet another adventurous ride on the zodiacs to get ashore. First driving through a narrow gap, they land inside the small cove at the western side of Telefon Bay. The whole region consists of several linked explosion craters flooded by the sea, surrounded by small volcanos. The larger one that dominates this area is named Cross Hill, and we all started the morning outing walking its lower slopes, enjoying spectacular views of most of Deception, visible under the high clouds. The lunar landscape and the characteristics of the terrain invite for a good leg stretch, so at an appointed site, we split in two groups. The more adventurous climbed the rising slope that extends to a ridge of black, cinder-covered volcanic material, which forms the E edge of Cross Hill. Rising to 160 above the sea level, offers unbeatable scenic views along all its crater ring. Nowadays disappeared, a wooden cross erected at the summit by whales gave the mountain its name.

In the meantime a couple of us decided to take it in a slightly easier way and enjoyed the panorama from the lower hills surrounding the flooded crater below our feet.

With a good hike in our pockets, the ship turns around and heads south towards Whalers bay. Once there, already from the ship the building’s remains of the “Hektor” Norwegian Whaling Station is on sight.

Built in 1912, it was heavily used until 1931 and today represents an impressive open-air museum and Antarctic Historical Site. The premises were the working area and accommodations for the whalers, afterwards refurbished during the WWII to be used during the secret “Operation Tabarin”. This military English mission came to Antartica with the goal of intercepting German communications in the high latitudes of the South Pacific and Atlantic, try to control the traffic of U-boats in the Drake Passage and avoid the settlement of German Bases in Antarctica. Once the war period was over, the Falkland Island Dependencies, that later on became the British Antarctic Survey, took over some of the buildings for scientific research.

Under strong winds, the bay offers little shelter and the gravel and sandy sea bottom doesn’t offer good holding ground for the anchor, so, while the ship drifts and keeps repositioning from end to end during our visit, soon the rubber boats are readied and all is prepared for the second landfall of the day.

After yet another wet ride in the zodiacs, once ashore our guides offer the option to spend the duration of the landing around the historical remains of the Station or join first a longer hike to the impressive viewpoint of Neptune’s Window, the saddle that bites the ridge that follows up from Neptune’s Bellows cliffs. A spot of historical significance for Antarctica. It is said that it was from here that in 1820, the young captain sealer Nathaniel Palmer, during his second trip to the South Shetland Islands, spotted unfamiliar land farther to the Southwest, he got the first glimpse ever of the Antarctic Peninsula.

After his successful first trip as First Mate on board the Hersiliaaround Falkland Islands, under the command of James Sheffield, rumours reach his ears about a newly discovered archipelago teeming with seals located further south. He soon head there, now as Captain of the ship Hero, during which he found Deception Island and had the view from “Neptune’s Window” that would make him famous. At approximately the same time, and unbeknown to him, the Russian Captain Thaddeus von Bellingshausen had seen it as well.

Boats drove us ashore just in front of a U-shaped sort of floating pier, structure that when loaded can be placed under the damaged hulls or propellers of the whaling ships, then pumped with pressurised air could rise the ships for repairs.

From there many climbed up the Window to enjoy the great scenery over the Bransfield Strait. Down at the coast, we all had time enough to soak into the eerie spectacle of the crumbing constructions that lay all around. Passing through all the historical phases mention before, the Station was definitely abandoned by 1969, after an eruption affected the slopes behind the flat beach, which created a hot lahar or mud flow that cut right in-between the whaling base. Many buildings, boilers and tanks are nowadays partially buried as a result of that, together with the numerous Norwegian whaler’s graves of its cemetery. As a reminder of the spot where it used to lay, nowadays just a couple of refurbished crosses and an open coffin can be seen.

With the use of high pressure boilers that allowed oil extraction even from the bones, together with the effects of the mud flow over the station, surprisingly not many whale bones remain ashore. Just a handful of them can be seen laying partially buried here and there. Most of them carpet the sea floor around the bay.

The whale oil from the large scale whaling in the early 20th Century started to be used for illumination and heating, while later on it was more used for specific industries like lubricants and infantry. But the discovery of fossil fuels and the beginning of the widespread use of electricity made for the prices and uses of whale oil to drop, becoming of no profit to continue the whaling enterprise.

After a good couple of hours it was time to return aboard, next plans were to cross the Bransfield Strait, the 120nm wide stretch of sea that separate the South Shetland Islands from the Antarctic peninsula. Once off Port Foster and in open waters again, For Topsails are set straight away, followed a bit later by the Fore Top Mast Staysail, and under fair winds this time, Europa sails along in a good course at between 5 to 6kn. Evening, night and sure still during tomorrow, we head towards the entrance of the famed Weddell Sea through the Antarctic Sound. In that area we to try to spend the next few days.