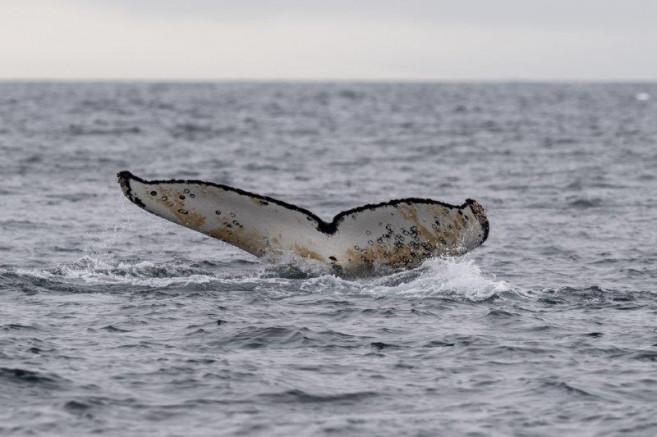 The Europa hold on last night in the spectacular anchorage of Trinity Island despite the strong winds shooting down the mountains that tower above us, sweeping the glaciers that here reach the sea level with their high fronts.

Just before 04:00h it was time for starting our way southwards, now entering the Gerlache Strait, leaving behind the Bransfield.

The areas in the Antarctic Peninsula where we are entering now were largely the area discovered and mapped by a relatively small and cheap Belgian expedition that had been set up with a purely scientific goal in mind (not so much national prestige). The expedition's initial plan had been to land and walk to the magnetic south pole, but this plan had to be abandoned. Its leader was Adriene de Gerlache and his ship the Belgica. Again we need to go back in time until January 1898, when they surveyed the area South of the Bransfield Strait. By that time there were nothing remotely similar to accurate charts of the area, and even the nature and characteristics of the Bransfield Strait were unknown. It was actually thought that there was a connection between the West Antarctic Peninsula and the Weddell Sea, and they ventured as much South as they could in search of this inexistent passage. On the 28th of February the Belgica got trapped in the ice and after several unsuccessful attempts to free her, it was clear that they had to prepare to spend the winter. They were about to be the first humans to overwinter in Antarctica, not knowing that it would take 13 more months before they could sail again. More than 80 geographical features were named by the expedition during their explorations and struggles.

On board the Belgica, a young Roald Amundsen was part of the crew, and his first Antarctic experiences forged what was about to be one of the most important characters in the Polar Exploration. Years later he achieved being the first one to sail through the Northwest Passage, to reach the Geographical South Pole and to fly a balloon over the North Pole. An example of how beautifully Polar exploration and explorers link in the course of history.

For us, nowadays the difficulties for sailing in Antarctica are more related with winds, weather and amount of ice afloat. Nevertheless, here and there still remain blank spots and areas in the navigational charts indicating unsurveyed waters. All manageable counting with the modern equipment of Digital and paper charts, Depth Sounder, Radar, and the possibilities of downloading ice and wind maps and forecasts. But as Roald Amundsen said once: "We must always remember with gratitude and admiration the first sailors who steered their vessels through storms and mists, and increased our knowledge of the lands of ice in the South.”

Counting with all that background, we have sailed from Punta Arenas to South Shetland Islands and now we head far beyond to the South. Since leaving Deception Island behind now we sail along the West Coast of Antarctic Peninsula along a vast, glaciated, mountainous and frozen landscape, that not often allows for making way under sail. But today, during the early hours we got enough wind to set some canvas,

helping our engines to keep up some speed. For a while, we could put in use Lower Staysails, both our Jibs, Spanker, Top Sails and Fore Course. All to be furled back during breakfast.

Today, like every day in Antarctica, it was worth the wake-up early and have a look outside. As we start appearing on deck sipping the first coffee of the day, we are welcomed by several Humpback whales, first at the distance, then much closer.

Stopping the ship for a while we can all enjoy them as they are busy feeding on those rich waters.

Countless photographs were already taken right after breakfast, while we were slowly heading towards the entrance of the scenic and narrow Graham Passage, a channel that separates Murray Island from the W coast of Graham Land. Captain Skidsmo named it after his whale catcher Graham, which was the first to pass through it, on March 20th, 1922. What seems to be a cul de sac, surrounded by glaciers fronts, gradually reveals itself as a waterway, today containing several big icebergs, which nevertheless allow us to pass through, offering great photo opportunities as the Europa seems to squeeze between them and the coastline. Weather is worsening in the meantime, though luckily just a light breeze blows, and by the time we head off the channel, we find ourselves in open waters, motoring our way to the north-eastern shores of Enterprise Island, under heavy snowfall. Several more Humpback whales keep us busy during the whole morning as we cruise on board the ship.

When is getting closer to lunch time, we heard the signalling three bells and the engines slowing down. We were closing up to Nansen and Enterprise group of Islands. The first one of them was named by the Belgium Antarctic Expedition under Gerlache. The area soon became well known to whalers in the early 1900s naming the second Enterprise, commemorating the enterprise of the whalers who made anchorage at its S side (Foyn Harbour). The area became a major centre of summer industry during the period 1915-30.

As a reminder witness of those times there rests the “Gouvernøren” whaling factory vessel, shipwrecked since the year 1915, nested in a small cove of the same name. Her aft is at about 20m underwater, but her bow is above the sea level, useful for small yachts that reach those Antarctic lands to do their moorings, as today happened, to find again here the small yacht that we met days ago in Cape Horn.

The Gouvernøren, of 5459 tons gross, was the largest factory ship prior to the First World War working in this area. It was considered the state of the art, fitted with modern engines and cookers for blubber, meat and bone, besides a “whale by-products” processing plant, to convert the residue into meat-meal, bone-meal or a combination of both, used primarily for both animal feed and fertiliser.

The season before the fatal accident that put an end to her career, she successfully carried 22610 barrels of oil and 2500 sacks of guano. The following season, returning to the same area she caught fire on 27th January 1915, at the small cove we sailed in today to have a look at her remains, with a payload of 16615 oil barrels on board and became a total loss. Her complement of 85 men was all saved by other whaling ships operating in the area.

To have a close look at her, our Mate Jelte skilfully steered the Europa next to her rusty hull. The sight is exceptional: glacier fronts surround the small harbour, and right in the middle of it Gouvernøren bow sticks off the water, being nowadays home for several Antarctic terns. Gently sloping below water her hull gradually disappears from sight, nevertheless revealing her large size in comparison with our ship.

After a short visit, Europa turns around to keep on her way now through Wilhelmina Bay, heading for Cuverville, our next destination, about 30nm away. The large Wilhelmina bay stretches for about 15nm along the West coast of the Antarctic Peninsula, being this area called Graham Land. Firsts ones to sail by were the Belgium Antarctic Expedition under Gerlache, who named it for the Queen of the Netherlands, 1890-1948. Getting deeper into the bay, soon we leave behind another characteristic feature as it is the rugged Emma Island. With its just 1.5 miles in length, its cliffs and steep slopes project bare jagged peaks through its little ice cap. Gerlache named it after his mother, Emma de Gerlache de Gomery.

And yet, framed by such amazing surroundings, we cross paths with more Humpback whales.

Having in mind the large amount of them sighted during the day, we can have an idea of the high productivity of those waters. The numerous Humpback whales that come here prefer the Continental shelf and shallower waters around the Antarctic Peninsula, where they feed day and night for months before migrating northwards again to the tropics and sub-tropics when the cold winter starts down South. Their migrations are pretty well known if we compare them with the relatively unknown migrating and breeding habits of other large whales.

Global populations of Humpback whales can be separated on three big groups, the North Atlantic, North Pacific and the Southern Ocean one. If we have a closer look at the latest, we can divide this big population on several sub-populations, being the one named “G” the ones that use tropical Pacific Ocean waters around Colombia, Costa Rica, Ecuador and even Panama for mating and giving birth, and then migrate to the Western Antarctic Peninsula during this time of the year, towards their feeding areas. Individuals from this sub population can be also seen in the Southern Chilean channels, using them as an alternative feeding ground to Antarctica.

After having a good look at them, it’s time for us to continue our way to Cuverville island. And now, having a fair breeze from behind hands are called on deck to set the Top Sails. Once they are catching some wind the engines are turned off and we sail our way. On the fashion we spend the rest of the afternoon. Is not often that we can actually sail in Antarctica, so we all welcome any chance to do it and enjoy the spectacular surroundings in the silence of the wind pulling us and the engines having a rest. And it even lasted until dropping anchor all the way in front of Couverville northern beach, manoeuvring the ship to end up stopping close to a large iceberg, and drop the last Topsail.

By then it was already dinner time, and right afterwards we were called to get ready for our evening landing. The island where we were about to set foot was also

discovered by Gerlache, by named later by the explorer Charcot for a vice-admiral in the French Navy.

Nearly vertical cliffs surround the island except on the NE coast, where a gently sloping apron of bedrock extends 200 meters from the shore to the base of the cliffs. Large, bare rock areas of this platform provide nesting sites for one of the largest rookeries of Gentoo penguins.

As we know now, these species prefer nesting on smaller colonies than other species. But here several thousand of them find their place for breeding.

After walking the lower slopes around the nesting sites, we could also enjoy some after-dinner exercise. Some of us hiked half way to the top of the snow-covered island for an exceptional view of the area. After sweating our way up, the way down was much faster, using the fun sliding tracks. Other people chose to enjoy some quiet time down at the beach. Heaps of icebergs fill the little bay where we landed, making a picturesque scene out of the Europa resting in between, with the large Gentoo rockeries in the foreground.

Trying to follow the plans for tomorrow, tonight we will have to slowly make way to attempt in the morning sailing through the famous Lemaire Channel. For that, as soon as we embarked again, Europa starts her engines and off to the South we go.