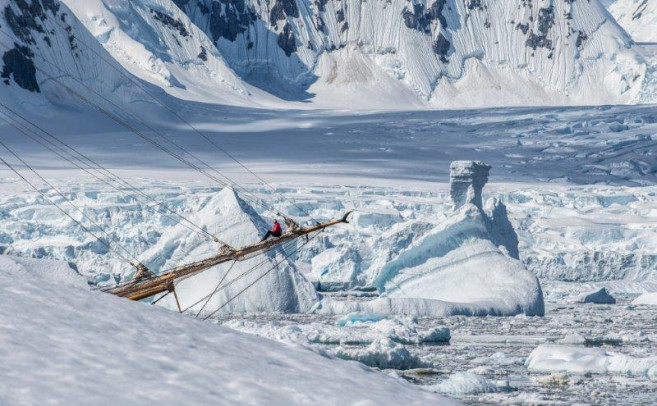 Today we had a more laid out start of the morning, well deserved after the last couple of nights parties. But it didn’t take much longer than 09:00h to start our engines, heave anchor and begin our beautiful and challenging way off the Argentine Islands. The maze of channels and islands, many clogged by ice, too shallow or too narrow for allowing us to sail through, made for a demanding steering and lookouts.

We pass by beautiful icebergs trying to get to opener waters on the Northwest of the Islands, where an Antarctic Minke whale joined us for a while, thoroughly checking our hull, now swimming on Port side, now hopping up at Starboard, then, why not, having a look at the aft of the ship, just to come back again to the bow. The ones on deck had some morning exercise trying to follow the whale running from one side to the other over our decks. Quite an unusual experience as those animals just occasionally show so much interest for zodiacs or ships.

A wonderful morning covering the short distance between Vernadsky and Yalour Islands, then, followed by a landing in the afternoon.

The small Yalour archipelago is a group of islands and rocks 1.5nm in extent, laying 1nm northwest of Cape Tuxen, the conspicuous headland that we can see in front of us. The first ones who wandered around this area were the crew of the French Antarctic Expedition, 1903–05, under Jean Bapiste Charcot. He named them for Lieutenant Jorge Yalour, of the Argentine Navy, who was an officer of the Argentine corvette Uruguay which came to the rescue of the shipwrecked Swedish Antarctic Expedition led by Nordenkshold, in November 1903.

Today we will sail in an area very relevant for both of Charcot expeditions to Antarctica, the first one on board the Français in 1903-05, and the second with the ship Pourquoi-Pas? during 1980-10.

His first exploratory trip to Antarctica was, in a way, unexpected. The Français was actually designed having in mind Arctic expeditions following the advice amongst others, of one of his friends, Adrien de Gerlache, the Belgian explorer, who was the first one to overwinter south of the Antarctic Polar Circle when their ship, Belgica, got beset in the ice when sailing all the way at 71º 30’ S. The ship was heavily reinforced to sail through the heavy sea ice of the North; however, to save money, the engine was less than ideal and would require constant maintenance. While preparing all for his Arctic expedition, Charcot learned that Otto Nordenskjöld and the Swedish Antarctic Expedition were missing in Antarctica. Sparked by adventure and good will, he changed his plans and set sail south in search of them. Despite finding out when they made port in Uruguay that they had already been rescued, he decided to continue due South and continue the job Gerlache started. Amongst its many discoveries count the finding of the famous Port Lockroy, a natural harbour later used by whalers as a mooring place and famous throughout the years until nowadays. Also found Yalour Islands and landed at Cape Tuxen, the first Antarctic continental stroll recorded. To do this, they passed Peterman Island, and Charcot took good notice of the possibilities it would offer to do the ships moorings. Nevertheless the expedition overwintered just southwest of the Lemaire Channel. But this little bay at Peterman Island was used by

him to spend yet another winter during his second expedition (1908-10) now on the Pourquoi-Pas?, naming it Port Circumcision to honour the date of his discovery (the day of Jesus’ circumcision, 1st January). This cove at Peterman Island will be our goal for the evening, but before a visit to Yalour Islands is well worth as well.

Not having much of a chance to drop anchor on the deep waters around the islands and with lots of drifting ice in the water, the ship stays adrift while we drop zodiacs and make our way ashore.

There, on top of every rocky rounded hill sticking out of the snow covered surroundings, an Adelie penguin rookery can be found. Over 8000 pairs nest here. Following our guides we walked around the permitted zones for visitors, having a good look at the Adelie colonies framed by the magnificent surroundings. The high mountains of the Antarctic peninsula offer a perfect background for them, while the sky getting cloudier add a dramatic touch to the surroundings.

We spent about two hours is such surreal setting, and finally enjoying the Adele penguins, that so far, we haven’t seen yet during our trip. This species is considered the most Antarctic penguin of all, besides the Emperors. So, they inhabit areas of colder waters and larger amount of sea ice and drifting icebergs. Here at the Western coast of the Antarctic Peninsula that happens from about 65ºS onwards, while in the Weddell Sea, they can be found further north.

Yalours represented one of the most scenic landings we have made this trip, a place that never deceives for its beauty and its inhabitants, the Adelie penguins.

From there just a few miles of dealing with a sea filled up with icebergs and growlers separates us from Peterman Island. An early dinner will allow us to have enough time to explore this landing site and be back on board before 22:00h.

Peterman Island, besides the interesting history of its discovery and Charcot overwintering, is also home for large penguin colonies, including small rookeries of Adelie and larger ones of Gentoos. But not always have been like that. In the past, Peterman hold a much larger population of Adelie, but laying as it is at the northernmost edge of distribution for this species in the Western Antarctic Peninsula, its been more prone to any environmental changes. A tendency for less amount of sea ice along the last years, together with a slight rise in the average surface water temperature it is probably enough to push this species southwards, and the effect could be potentiated by the increasing numbers of Gentoos that are taking over the island.

The penguins of both species share some of their nesting sites with Antarctic shags, that now are also raising their chicks.

As it was getting late, we started returning from our short hike, passing by an Argentinean emergency hut and a memorial cross, commemorative of the death of three members of the British Antarctic Survey in 1982.

While the zodiacs are sent to pick us up, Europa heaves anchor and drifts a bit with the current that is also pushing ice towards the little cove where we landed. The day was not over yet, as now it was time to make our way northwards along the Lemaire Channel. By now, the navigation through the ice in this waterway seemed easier than on our way South, and the mirroring waters together with the evening light

made for a picturesque crossing, spiced by the sight of two Orcas swimming in the opposite direction. With their tall triangular dorsal fins it is easy to distinguish as males, belonging to the Ecotype B, the most common one along the Gerlache Strait and the waters along the Antarctic peninsula. Those Antarctic coastal orcas are slightly smaller than the ones we are used to, inhabiting the Northern Hemisphere or the offshore waters in the South, and also they have a larger eye patch plus a greyish colour instead of the striking black and white pattern. Though short, it was a fantastic sight and a great way of finishing our day, as the Captain and Mate kept steering the ship to bring us to Paradise Bay, where we plan to cruise tomorrow.