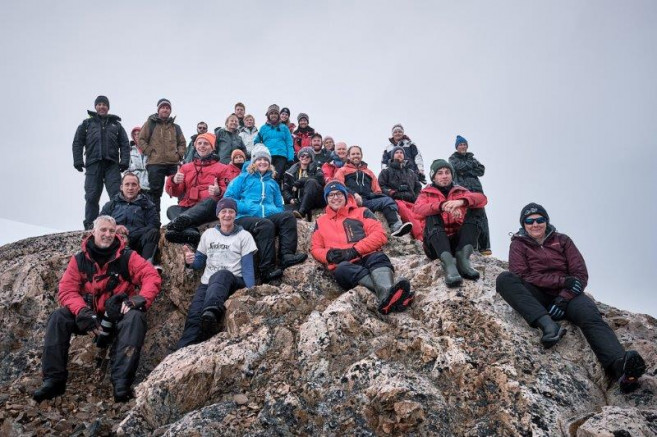 After a night on anchor in the beautiful natural harbour at Port Lockroy, we were now ready to visit the base. The morning was fairly cold and we experienced the strong and cold Katabatic wind blowing from the nearby glacier. After the breakfast, guides left for the base to pick up the staff members living there during summer to come aboard and give us a talk about the station, its history and current operations.

There, and also reminding the talk our guides gave last evening, we could learn that the harbour of Port Lockroy itself was discovered by Jean-Baptiste Charcot during the first French Antarctic Expedition and it was named after a French politician by the name of Eduard Lockroy who helped funding the enterprise. The base itself was built by British military in 1944 at the small Goudier Island, located inside the bay, during the operation Tabarin with the key to establish the British claim to the area and in the framework of surveying war communications through radio waves in the high atmosphere and the ship’s traffic in the southern ocean. After the war, the station was maintained by British Antarctic Survey and served the scientific research until 1962 when it was abandoned. The Base was fully renovated in the mid-90’s to the original glory and currently it is maintained by United Kingdom Antarctic Heritage Trust. It serves a museum, post office, souvenir shop and partially as research base. It is one of the most popular tourist destinations in Antarctica. It is difficult to imagine that the location of the Base, back in 1944, was chosen because there were no penguins breeding there, while nowadays they seem to be everywhere.

After the brief history lecture, we were ready to proceed with the visit. Since the room is scarce on the station, we split the group in two. Half of us going to the station and other half visit a nearby landing site, Jougla point, a rocky headland of the large Wienke Island. Name given by Adrien de Gerlache to this magnificent place that holds the most dramatic mountain and glacier scenery in the region, in memory of the Norwegian sailor Karl Wiencke. He was crew member from his ship the Belgica during the expedition that took place during 1897-99, and while trying to clear the scuppers of loose coal in a storm he suffered a tragic accident, being washed overboard. He miraculously grabbed a line and was dragging behind the ship but efforts to bring him back aboard failed and he was lost to the frozen seas.

The location is a wonderful and picturesque place to observe Antarctic shags on their nests, gentoo penguins and a relatively well preserved whole whale skeleton next to a pile of scattered whale bones that served as a nice subject/foreground to our photographs. All those remains, together with the mooring posts and rusty chains along the coast, serve as witnesses of the gruelling times here during the whaling golden era (1911-1931), when such a sheltered and suitable port as Lockroy was heavily used, for instance there are reports of as many as 40 of their vessels fitting here during the summer season.

In the background, the Europa happened to be ideally positioned to create a great background subject. Walking a bit further, we also found some resting Weddell seals close by to the skeleton. The shags on surrounding rocks were tending to young chicks, some of them already pretty grown but still with fluff on their wings rather than feathers. The usual chatter and comical behaviour of gentoos followed our steps during our walk on the island.

The others headed first to the station, landing at the rocky shores of Goudier Island, next to more mooring chains, and headed up the narrow path to the Bransfield House, where the museum and post office is located. There is large number of gentoo penguins on a tiny little island, also freely roaming on the only access path to the house. We all take extra care not to step on any, as they may be just behind our back as we take a photographs. Some penguins nests are really close to the house, some even underneath the house itself. The reduced space available for visitors was enough to enjoy yet more of the penguin life and social behaviour and also to see some of the harsh reality of Antarctic life, when a Snowy sheathbill grabbed a defenceless penguin chick. It was interesting and at the same time a little sad sight. The stronger, more cautious, or more vigilant prevail, the weaker or more scatterbrain…don’t. It is the natural selection of the nature.

While some of us observed this interesting scene, others enjoyed the warmth of the post office and museum. There was plenty to look at in the museum, but for most of us the ability to send postcards from Antarctica was the most enticing choice. A variety of souvenirs, books and clothing apparel was available to purchase and many of us used the opportunity to buy a thing or two for their loved ones at home. Roughly mid-way during out landing we coordinated a transfer between the two landing sites. Those at Port Lockroy base went to Jougla point and hikers got transferred to the Port Lockroy base. After our time was up we all got back aboard of Europa for lunch.

It is time to heave anchor and move on to our next area of interest. We are about to cross the Neumayer Channel and Gerlache Strait. Our next destination is the Neko Harbour, our first continental landing, in Andvord Bay.

Yet another name that reminds of the Belgica expedition under Gerlache command, as it was roughly charted by them in 1898, and named “Baie Andvord”, after Rolf Andvord, Belgian Consul in Christiania (Oslo) at that time. Neko itself takes its name for the Neko Whaling Factory ship doing her first season here in this port in 1910-1911.

Experiencing foggy weather and drizzle along the Neumayer Channel, Jordi decides that it was a good time for lecturing about the sea-ice and its implications on the global oceanic circulation and the planet’s climate, afterwards we were already getting closer to our landing site and we took away the few sails that were set during the crossing of the Gerlache Strait, the Lower Topsails, Inner Jib, Fore top Mast Staysail, Dekzwabber and Spanker.

We arrived before dinner time to Neko Harbour, zigzagging amongst icebergs and in flat calm conditions. Despite the light rain the mountainous scenery of the Antarctic Peninsula welcome us with its grandeur while we drop anchor and get ready to go ashore.

During the pre-landing information, Jordi warned about the glacier that almost surrounds Neko Harbour: should any big chunks come off while we are on the beach, we should immediately head up to the slopes (just like the penguins are accustomed to) to avoid the risk of getting washed by the waves which result from the calving.

After that warning, we all landed at a boulder beach all surrounded by Gentoo penguins. from there, many of us enjoyed a bit of hiking up the hills of Neko, to get fantastic panoramic views over the whole area from a vantage high point.

With most of the people gone up the hills, the shoreline became quiet again. A few of us enjoyed the silent beach following the movements of seagulls and penguins in their way in and out of the water, purposing, and having baths in the shoreline.

Neko represents a good chance to spend some quiet time to better soak in the grandeur this continent, to immerse on own thoughts, to hear Antarctica, and its inhabitants.

The group up the snowfield enjoyed a last sliding down in the Antarctic snow on our way back to the beach.

Just after boarding the Europa, everything is ready to heave anchor and sail towards our next destination, Danco Island, just 10nm away, and where we plan to spend the morning of the last day of the year!