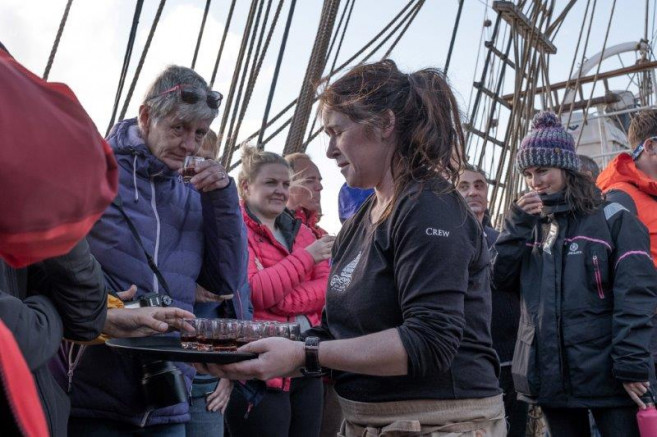 For the last three days, the Europa has been resting alongside the so called Muelle Prat, the main Punta Arenas Harbour, after finishing her last couple of trip legs since departing from the picturesque port of Sevilla, stopping on her way at Canary Islands and Cape Verde, making the next port in Montevideo just to sail all the way to the Southern Chilean Patagonia. From there she made a parenthesis to stop for about 10 days at the amazing Falkland Islands. All as part of this year’s Europa sailing plan when she wants to conduct some commemorative itineraries to celebrate the 500 anniversary of Ferdinand Magellan trip, in-between the yearly regular Antarctic program. Magellan-El Cano voyage brought the first Europeans to sail around the world, connecting Atlantic and Pacific Islands through the Straits of Magellan.

Now, after the preparation days in Punta Arenas port, today Europa and her crew were ready to welcome use on board.

From here we are about to start our journey already this evening. First sailing through the Straits of Magellan, to connect in the early hours of tomorrow with the also historically famous Beagle Channel, and not to forget attempts to land at Navarino Island and the mythical Cape Horn on our way to Antarctica.

A journey which will take us to some extraordinary and pristine places on Earth.

Sure some of us where already around the capital city of Chilean Patagonia for a few days, others just arrived today. The country, including Punta Arenas show some scars of the latest political problems that Chile has been going through during last weeks, but anyway we had not much trouble to join the ship today. We finally could embark during the early afternoon. From then onwards we got a while to gather on the Ship’s Main Deck and Bar to introduce ourselves while enjoying a cup of coffee, tea, and local pastry. In the meantime the check-in procedures were done in the ship’s library.

As we were arriving, Richard (one of our guides for this trip) took pictures of all of us, to put together the “ship’s facebook” to get to know each other’s faces and names more easily. When all of us were on board and with all the embarkation formalities done, the three bells were rang, signalling a gather together. It was for the official welcome on board talk by the Captain Klaas and all the crew that will sail the ship with us for the whole trip, finishing with a traditional toast in honour to Neptune, calling him for smooth seas and fair winds. Our first beautiful dinner on board of Patagonian roast beef and salad came next, followed by the mandatory Pilots embarking the ship and starting our way along the Straits of Magellan.

While a quite elaborate off-mooring operation from Muelle Prat was taking place, involving two tug-boats pulling us off the pier against the typical strong wind of the area, Merle (one of our officers) did a safety talk and abandon ship drill.

Afterwards, our three guides had a talk with all of us to introduce the style things are run on board the ship, ending with a brief introduction to the trip itself and our itinerary. The crew also walked us around the ship and familiarised ourselves with the location of the different areas, preparing the terrain for next days activities and tasks.

In the meantime SW-ly winds 8 to 14kn blew over the seas, as we try to motor our way Southwards using both our engines full ahead and achieving good 7 to 8kn of speed. Like this, as its getting dark we pass by the headland of Punta Santa Ana, worth mentioning in any trip along Straits of Magellan.

Over 300 years after Magellan accomplished the crossing off the Strait, there were the first serious attempts to settle the area. In 1843, Chilean President Bulnes sent an expedition on board the schooner “Ancud” with the goal of setting a colonisation community. Under the command of the British Captain John Williams, they managed to disembark at Port Famine, next to the nowadays known as Fuerte Bulnes, where he took possession of the Straits in the name of the Republic of Chile. almost straight away the founded a small fort on top of the Sant Ana hill. Five years later, and after a more extensive survey of the surroundings, it was decided to move the settlers about 40nm northwards to a better sheltered spot, naming this new location Punt Arenas.

Still in the dim light of the late evening, shone the light of San Isidro lighthouse at our starboard-side, with the imposing Mount Tarn towering at its background. The historical importance of this part of the world doesn’t stop with its discovery for the Europeans by Ferdinand Magellan, but also other illustrious expeditions sailed those famous waters. Amongst them, both of the “Beagle” quests between 1826 and 1834, first of them commanded by Pringle Stokes and the second by Robert Fitz Roy. On this latter one, a young pretty unknown naturalist joined. His name was Charles Darwin and least was known to him that after returning home he would become one of the most important and influential persons of all times, changing the way we look at the world and the life on it. Soon we will sail along the beagle Channel where many of his adventures and misadventures took place, but as passing through the Magellan Straits, he took a good time to climb Mount Tarn in February 1834. This conspicuous mountain is the most elevated point on the surroundings, carpeted at its lower slopes with thick thick beech forest,

wet and muddy terrain, covered with huge amount of different species of mosses, lichens and fungi. But one of the most interesting things Darwin found was marine fossils near the top of the mountain, making him think about a more dynamic idea of the earth than was thought at the time.

Not much later after leaving behind this area, we sailed the Southernmost point of South-American mainland, Cabo Froward, with its huge iron cross on top of it. The Cape is the South extremity of the American continent itself, located in Brunswick Peninsula. Those lands were given their name by FitzRoy in 1831 to commemorate the Duke of Brunswick, a German military leader who died in Waterloo in 1815. The dramatic cliffs are topped by the metal frame of a huge white cross, the Cruz de los Mares. It was blessed by Pope John Paul II on March 28th, 1987. But that is the third construction as the two predecessors had been swept away by the weather that plays good tribute to its name, that also can be translated as naughty or mischievous. Such appropriate toponym as froward was proposed by the buccaneer Thomas Cavendish, in yet another fascinating part of the 16th century history of navigation. He was actually a privateer who was the first on trying to emulate Sir Francis Drake and raid the Spanish towns and ships in the Pacific and return by circumnavigating the globe. With the agreement and help of the British Crown to undertake his plans, he got a small fleet of three ships and set sail on 21st July 1586 from Plymouth, England, arriving to the Straits of Magellan on the 6th January 1587. Here he conducted an extensive exploration of the channels and islands labyrinth, noting in his way the Southernmost tip of the mainland Americas and its foul, unpredictable weather, baptising it as Cape Froward. And sailing this area, it couldn’t be in any other way for the Europa… as soon as we approach the cape, increasing headwinds slowed us to just over 4kn for a while, until we reach the calmer waters of the so called Seno Magdalena.

In that way, from our start in Punta Arenas, approximately 300nm of navigation through the Chilean Channels will bring us to Puerto Williams, the southernmost town in the world. From there we still plan a visit to the legendary Cape Horn before facing about 500nm of the roughest seas and winds in the planet to reach the Antarctic shores.

Sure seasickness will hit some of us during the following days while the ship will pitch and roll. Also innumerable hours of staring at the emptiness of the ocean doing the lookouts, while others steer the ship from the open air wheel out on deck. Hopefully also some exhilarating sailing and many things to learn will come, while sharing experiences and the life on board a Tall Ship like the Europa. Collaboration and team work are necessary to sail her along our way, and that is another of the points where the ship excel, sharing the adventure spirit that she offers. It has been like that since she was refurbished and took off for this sort of trips in 1994, after her launching as a light ship in the Elbe River over 100 years ago in 191