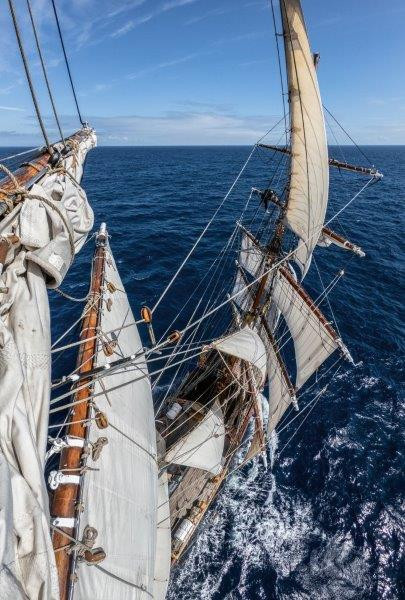 The fair conditions that started yesterday in the afternoon lasted today for the whole journey. If we think that we are reaching the proximity of the legendary Cape Horn, is unusual to find the easing winds and seas that actually have been the topic for the day, just like about three weeks ago, today the hazardous Cape Horn waters have shown us its kind face once more.

Dying winds veering to more Northerlies made for striking all Squares and Lower Staysails during the day, furling straight away the Royals. Europa keeps motorsailing with the remaining Staysails under good weather, clear skies and temperatures at the verge of what we can call warm.

Conditions quite favourable as well for the numerous albatrosses that fly around us, including the large Royals and Wanderers. At least until the afternoon when, before the wind backs to Northerly and NNW-ly, calms down to about 2kn. Not enough for them, with their huge wingspan to continue gliding, preferring then to sit and wait for more favourable and windy situation.

Fine weather and calm seas that meet the few of us that were seasick during the last days, coming up on deck in search of fresh air and again enjoy the last miles of our crossing.

Even though people who has never seen the sea know Cape Horn’s bad reputation, today’s circumstances have nothing to do with the heroic descriptions left by the many sailors who ventured this area and faced its famous storms and raging seas. Fine weather today that doesn’t have to make us forget the struggles of many and even the countless shipwrecks that lay at the bottom of the seas around the treacherous Cape Horn, that shows up below the clouds for us to see, when we sail at about 20nm from it by 17:45h.

Not always possible to approach or even to have a glimpse of it, we have been lucky enough to set foot one its shores on our way South to Antarctica, and then we have got the chance to see it on our way North. But we must realise that foul weather and wild waters hid Cape Horn for many years, having to wait until 1616 for its discovery by Europeans, when two small ships under the command of the Dutch Willem Schouten and Le Maire sailed down the coast of Patagonia bound for the Pacific. The nature of the land that they left at their starboard side, remained a mystery until surveyed by Captain Stokes and later FitzRoy on their trips between 1826 ad 1836, realising the maze of islands and channels that Cape Horn archipelago is.

When Schouten and Lemaire did the first crossing of the Horn, it was nearly a century since Magellan had first sailed through the inner passage between Tierra del Fuego and mainland South America, and it took nearly 60 years more before Sir Francis Drake become the second person to force a route through and circumnavigate the planet on westward direction. He was actually the first one to realise the open waters South of the southernmost tip of the Americas, when he was driven by a great storm from the entering into Straits of Magellan to the South Sea, “200 leagues and odd in longitude, and one degree to the southward of the Strait” as he states. For over a week the storm struck them hard, even sinking one of his ships, the Marigold, before they could make way northwards again to the shelter of the Patagonian Channels.

The open waters he found towards the South are known as no more ad nor less than the Drake Passage, the faithful companion of gales and storms to the Cape Horn. With his name immortalised on that way, Drake continues to be a well-known figure, often

put side by side with pirates like Blackbeard, the renowned English pirate who raided around the West Indies and Britain's North American colonies, and adventurers like Sir Walter Raleigh, most known for his quest for the fabled rich city of “El Dorado” in South America.

Such a legendary figure, who discovered such notorious and traitorous portion of the world’s oceans, found the end of his days still in the sailing, falling sick of dysentery when off the coasts of Panama. Feeling the closing hand of death upon him, he asked to be dressed on his battle outfit, and entombed in a lead coffin he was given a sea burial off the coast of Portobello in January 1596. To this day the myths accompanying him perdure and people still search for the coffin.

His discoveries in the Southern tip of South America, together with the first Cape Horn rounding years later, initiated a whole world revolution on the commerce and trading. Now, despite the Eastbound current and Westerly winds that create difficulties for Square riggers for the open water passage East to West around South America, ships could skip the poorly charted and filled with shallows and narrows Straits of Magellan.

Despite making way against the prevailing seas and meteorological conditions, having to deal with sailing high into the wind, sailors rather venture the difficult open waters than the unpredictable, confined and windy coasts of Patagonia.

The alternative route, rounding the globe on an Eastward direction, started to take some relevance when Captain William Bligh, who later suffered mutiny on the Bounty in his 1787-1789 trip, had to sail east to get to the Pacific, a much longer route but with the wind behind them.

Winds that here in the Horn and the Southern Islands of Patagonia seem to have called a truce with us, allowing for a quite relaxing day and idle watches. Many have a rest one deck under the sun or sitting somewhere indoors, while outside, during the afternoon a slight increase up to 10 to 12 kn of W-ly fair breeze made for setting Courses and Top Sails once more. Not for long, as after dinner, when we approach Picton, Nueva and Lennox Islands, hands are called one deck to take away all sails and furl them.

This group of three islands, located East of the largest Navarino Island, have lived a turbulent history of claims between Argentina and Chile, as they lay just at the Eastern mouth of the Beagle Channel, which in its eastern half is split in the middle between both this countries. The lasts arguments involving them date from 1978 when Argentina repudiated the decision taken in 1971 to finally establish the land and maritime borders between them, giving the islands to Chile. Then again in 1982 after they occupied the Falkland Islands, Cape Horn archipelago seemed to be next on their list.

Coming from Antarctica, aiming for doing our moorings at Ushuaia and having been cleared off Chile, now we have to sail on Argentinean waters. For that we must leave this small group of islands at our Portside until entering the Beagle Channel, a different route than the one we took at the beginning of the trip, when still inside Chile we could sail between them and Navarino.

It took until passed 04:00 AM to reach our anchorage at Punta Davison, where we plan to spend the day tomorrow, and the day after embark the mandatory pilot to make way to Ushuaia.