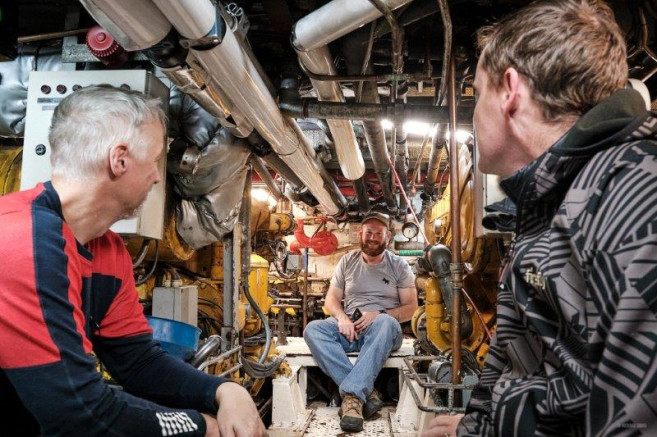 After arriving in the early morning to our anchorage close to the eastern mouth of the Beagle Chanel, Europa spends the day sitting at actor before tomorrow making her way to Ushuaia.

We were now once more amongst mountains and forests, a welcomed sight after the long days staring at the sea or surrounded by the inhospitable and icy lands of Antarctica.

Coastal Patagonian forests that despite their harsh environment, had been the southernmost territory of the planet that have seen human precolombine population. The first evidence of its inhabitants, the seagoing culture of the Yaghans, here along the coast of the Beagle Channel and mostly in Navarino Island, now laying at our Port side, dates from 7500 years ago. Much earlier than when the first Europeans made their appearance in the 1830’s, and named the waterway south of Tierra del Fuego after their ship, the Beagle, not before suffering several good beats from heavy storms and bad weather that always have been the trademark of this area.

Times had changed, and nowadays countless ships filled with tourists and bound to Antarctica use these once unforgiving waters for the old navigators. They sail along the Beagle Channel side by side with yachts and the fishermen who support great part of the economy of southern Patagonia.

But so far, for us the seas have not followed their dreadful reputation. However, the calm conditions we experienced yesterday gradually became windier as we sit at anchor. Luckily, we made it without difficulties over yesterday’s smooth seas on our way northwards, approaching Cape Horn and sailing into the Beagle Channel. But this morning we were hit by the forecasted stronger N-ly winds. At points blowing hard and making for dropping a bit more chain on the anchor to hold well in position.

Being at anchor for the day means that now, Voyage Crew is transferred to day-watch ad there is time for resting and join some of the activities planned for today, like buying ship’s merchandising in our ship-shop or attend lectures proposed by our guides. Also, the chances were taken to work on the countless pictures taken during our trip and share them with the others.

Our engineer Greg took for a tour the ones of us interested on a visit to the engine room… care must be taken when moving around such reduced spaces not to push any “red button” and leave the ship without power… and in the meantime, the crew was busy with ship’s maintenance, like sawing the damaged Main Royal Staysail or cleaning the ship’s hull, making the Europa look even better for her imminent arrival to Ushuaia.

Tomorrow by the early hours of the day we expect the mandatory pilot to come on board and start our way through the Beagle Channel towards Ushuaia, where we plan to arrive at mid-morning.

After clearance we will be allowed to visit the town and spend some time ashore before coming back on board for our last dinner together in the Europa.

Ushuaia, for sure will be an awkward feeling to be on land in boosting with activity city. Next morning will be the time to say farewell to all the new friends made on board, and to the Old Lady Europa, our home for the last weeks.

We had finished one incredible expedition, and now we turn to look forward, towards new adventures.