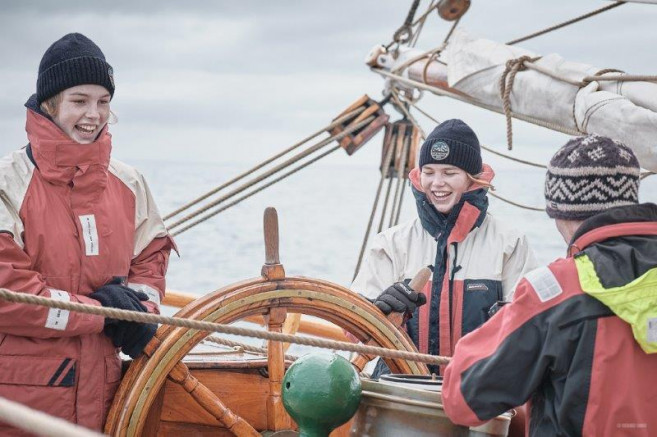 After a successfully landing at Cape Horn, our mindset now shifted to the sailing across the famous Drake Passage, on our way to Antarctica. Famed for its stormy weather, forceful winds and big seas, since our departure from Southern Patagionia it has been surprisingly kind, allowing for smooth good sailing. Nothing better to get used to the full sea-watches that already have started.

With the wind blowing at 15 to 16kn, but from variable directions between SSE and SE, we keep steering on a S-SW-ly course that has been changing a bit as we follow the wind braced Close-hauled, with all the canvas set, and the engines helping to keep the speed at an average of about 5kn. They go on and off a couple of times during the morning as occasionally it looks like we could make progress just under sail, but the variable winds seem to play with us for a while until finally the fair breeze is enough to stop them and just enjoy an exceptional good and smooth sailing, though just keeping our speed barely at the average needed to cover the distance across the Drake Passage to be in Antarctica on a previously agreed schedule. By noon that distance had been reduced in 110nm, with 340nm still ahead of us, following the good 150º course we are steering.

This 450nm covering the gap between the Southernmost point of South America and the Antarctic South Shetland Islands have always represented a rigorous test for ships and crews alike. Meeting point of the Atlantic, Pacific and Southern Oceans, represents a challenging environment where powerful Low Pressure Systems sweep over the open ocean and uninterrupted swells and currents flow Eastwards, with no land masses in-between to damp them. The water flow here between the Pacific and Atlantic Oceans, driven by the Circumpolar Current is the most voluminous in the world with an estimated flow rate of 950 to 1500 million cubic meters per second (600 times larger than the Amazon River). And that strong current could be felt already while we stand at the wheel, steering having in mind about 30º leeway.

Usually crossing of the Drake is a challenge that many are fearful to undertake, but so far, for us the only nuisance we are having during the day is just the seemingly capricious variable light winds, that make for several manoeuvres on deck, adjusting sails and braces to the changeable breeze. Like that, in the afternoon it was necessary to keep bracing squarer as the wind veered gradually to W-ly and NW-ly, just to back later on to SW-ly once more, making us return to the Close-hauled Starboard tack. Right then the wind just quickly dropped to 7kn, and after waiting for a while for its next change of mood, it was decided to start engines again to keep on average speed to our destination.

With a ship like the Europa, comfortable and equipped with sails and two good engines, nowadays it is always a thrilling adventure to set forth into the waters of the famous Drake Passage, on our willing to visit the remote shores of the Antarctic Continent and have an exciting experience there. But in the past, the ships ventured its waters out of the trading necessity. The Drake Passage played an important

historical role in the trade of the 19th and early 20th centuries before the opening of the Panama Canal in 1914. It was a connecting route between oceans, but involved the Cape Horn rounding with the likely possibility of being blown Southwards into its frigid wild waters, especially for the sailing vessels of the day. And in that exact way, is how Sir Francis Drake first realised that there was an open connection between Atlantic and Pacific Oceans South of Tierra del Fuego, when his ship was blown Southwards after having crossed the Straits of Magellan in September 1578. By that time, trade was not his goal, but raiding Spanish ships sailing back from their conquests in South America, in a trip that was going to bring him around the world between the years 1577 and 1580.

After his hazardous crossing from the Atlantic to the Pacific, he pushed forward sailing north along the Pacific South American coasts on his quest to pillage and capture Spanish ships and ports. Until he decided to make for the East Indies and return to England rounding the Cape of Good Hope. On 26th September 1580, his ship, the Golden Hind, sailed into Plymouth with a rich cargo of spices and captured treasures. Though his name has been immortalised in the oceanic passage between South America and Antarctica, he never crossed it. The first expedition which actually rounded the Southernmost tip of the Americas, connecting both Atlantic and Pacific Ocean not through the Magellan Straits but South of all landmasses, was in 1616 led by the Flemish Willem Schouten and Jacob Le-Maire, the first Europeans to find Cape Horn and sail around it.

Starting our trip in the Straits of Magellan, then sailing along the Beagle Channel, yesterday landing at Cape Horn and today sailing south, we wrap up a series of historical events and expeditions that changed the idea we had about the world, its shape, its landmasses and the life thriving on all of them. Expeditions of discovery and difficult navigations on those areas opened trading routes and colonising efforts that structured the modern economy, global politics and rise and fall of European empires. Now, on our way to Antarctica we open a new gate, leading to further historical explorations and findings. The interconnectivity between all Oceans in the High Southern latitudes had been found, now it was time to explore further South, into the unknown icy waters looking for the elusive Southern Continent.