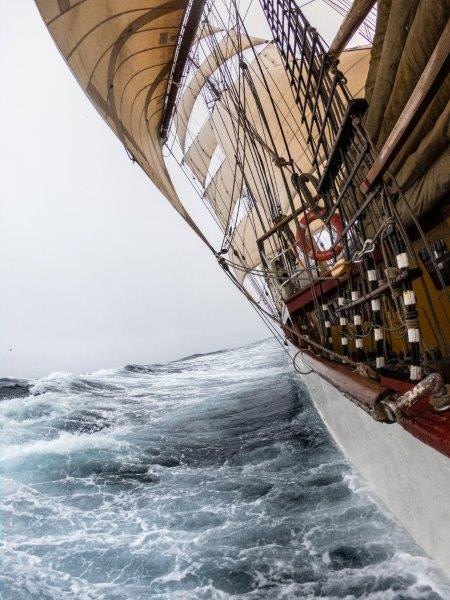 With the drop on the surface water temperature that started last evening, from approximately 5ºC to about 2ºC in just a few hours, it also comes a drop on the air temperature and a worsening of the weather. Cold and wet hours were awaiting for us today on deck while steering, doing lookouts or helping with the sailhandling. That weather change is quite typical to happen when crossing the Antarctic Converge Area. We just entered a different climatological and biological area, south of the SubAntarctic world where we have been sailing during the last week.

And now, finding ourselves in Antarctic waters we also crossed an area with fair and stronger winds that offered a great sailing last day, before reaching the shores of the South Shetland Islands

Already in the early morning the blows peak up to 25kn, while crew helped by many of joined out on deck under drizzle and rain to take away and furl Middle and Upper Staysails, together with Outer Jib and Gaff Topsail. Over our heads in the main deck, Desmond is replaced by the smaller Aap. And braced between Beam reach and Close-hauled we attain speeds of about 9kn, on a direct course of 150º towards our destination.

Just 50nm lay ahead of us to reach the firsts islands and rocks of the Aitcho Archipelago in the northern shores of the South Shetland Islands.

So far we have already done 760nm since our departure in Punta Arenas, including the Chilean Channels, Navarino Island, Cape Horn and the benevolent Drake we had so far. Now it is time for bit more wind and end up our approach with some good sailing.

The strong winds seemed to ease out in the afternoon, allowing for setting the rest of the canvas that was stowed away to keep our good speed. But things were about to change in the evening. Just before dinner-time, reaching the entrance through the South Shetland that we will take to approach the Aitcho Archipelago, the so called English Strait, the wind quickly picked up.

This together with the necessity of manoeuvrability through the shallows and rocks that characterise this waterway between Robert and Greenwich Islands, made for taking sails way and start the engines. Just passing through he first narrows leaving the so called Watch Keeper rock at our port side, wind become more steady and decreasing, allowing again for making the last few miles until our anchorage under sail. Spanker, Top Sails, Fore top mast staysail are hoisted and with the help of many of us, excited by the sight of land, we gradually brace to adapt our course to round the islands and sailing through the channels until reaching the southern shores of

Barrientos Island, where we plan to spend the night at anchor and land in the morning.

And still under sail, with a coordinate manoeuvre of many of us on braces and striking sail in a choreography that allow to drop the anchor without the need to start the engines. Before finishing the day and already when it was getting late, still many sails had be furled. But that didn’t represent any problem with the amount of daylight we had, as now, further South and being in the Antarctic summer, days are long, not even getting completely dark during the whole night. And having in mind which date is today, we could have more hours of light than any other day during the year. On the 22nd of Dec at 04:00h UTC the sun reached its most Southern declination, or its angular distance south of the celestial equator, touching the Tropic of Capricorn at 23°S, which translates on the longest night in the Northern Hemisphere, good for the Christmas atmosphere but also the longest day in the Southern Hemisphere so heaps of daylight for us being so far South (62°S).

So, even late at night, working aloft or from down below on deck, we see the hundreds of penguins that inhabit the island’s shores. We have made it safely through the Drake Passage and already in the evening we lay at anchor at the Antarctic islands of South Shetland. Lands that just have seen humans from quite recent times, as Antarctica was the last and elusive continent to be found in our planet. And that just happened quite recently, just about 1819, when Captain William Smith on board the brig “Williams” while travelling from Buenos Aires to Valparaiso via Cape Horn, he was blown off his course and was forced to veer south. That detour brought Smith all the way South until sighting the South Shetland Islands on February 19, 1819, for the first time ever confirmed.

By that time his reports of new lands arouse lots of discrepancies and disbelieve, bringing him to the point of wanting to prove his case embarking on a new trip southwards, adding 6 weeks, now voluntarily, to his regular trading route around Cape Horn. As a way to justify this endeavour he was to take back Fur seal pelts, common breeders on the islands he had already sighted before. Nevertheless no official voyage had been made yet and nobody had taken possession for any country of the newly discovered lands. The British Admiralty prepared a new expedition, now under the command of Edward Bransfield, together with William Smith and his ship. He was sent to confirm the presence of the islands, succeeding in their enterprise. They landed on King George Island and sighted Deception Island, to the southwest. But not just this, in January 30, 1820, under clear skies and good visibility they could see (and effectively discover) the mountains of the Antarctic Peninsula itself, though none of the Williams’s crew members were aware of this significance. They had no idea that they had sighted the mysterious and long hidden White Continent.

After those trips and confirmation of their discoveries, many British and American sealing vessels first, whalers afterwards, followed attaining great success. As we will have the chance to check tomorrow when ashore, when we land at the southern coast of Barrientos Island, on the beach with such a descriptive name as “Whalebone beach”.