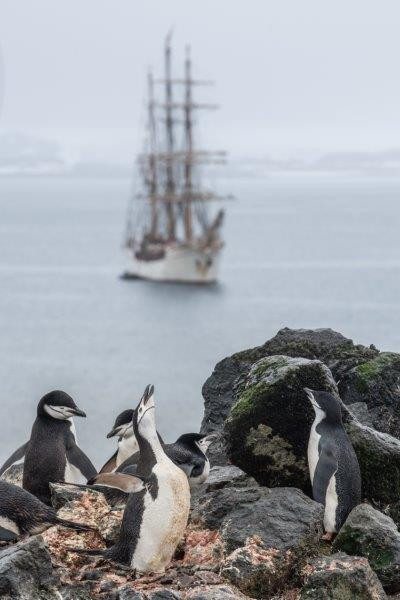 Arriving late at night, Europa managed to negotiate the narrows and shallows of the English Strait, helped by the dimming light of the longest day of the year. Dropping anchor at the southern shores of Barrientos Island, there we spent a quiet night of rest, in calm weather after the last days riding the Drake Passage waters. Sitting at anchor we could already smell the heaps of penguins that inhabit the island during the summer.

This beautiful vegetated island belongs to the Aitcho archipelago. Even though the area had been used by early sealers and whalers on the 19th Century, and actually was one of the first places to been sighted in Antarctica, it was not until 1935 that was charted and named after the Admiralty Hydrographic Office (HO), thus its name.

After breakfast, a short zodiac ride under snowy weather, tough rapidly becoming drier, brought us ashore at the so-called Whalebone beach, our first steps in Antarctica. But we were not alone at the beach, a few curious Chinstrap penguins and countless Gentoos received us to their home land. Reduced space is left here for us, as their nests spread over the low slopes close to the sea and up the hills. But soon we started our short walk, totally amused by the little chicks that from time to time emerge from under the protective bellies of their parents. Not just this, but it is worth enough to take it easy and observe the social behaviour of such eccentric birds. Down at the beach, Gentoo penguins thrive and many even protect their pebble nests building them around the many whale vertebrae, ribs and jaws spread all around. Here they still lay as witness of the early times of Antarctic whaling, when the catches were processed on land and the meat and bones left behind to rot.

A bit further along the beach, up the firsts little hills we climb, we could stop and enjoy for a while the couple of Chinstrap penguin groups that nest there. From that vantage point, we could see how to one side of the island, extensive moss beds spread, while under our feel the northern shores of Barrientos Island are formed by a couple of nested beaches and easy slopes also crowded with penguins. That was our next stop during the visit ashore. For that the group retraced their steps and followed a suitable route until encountering the new penguin colonies beyond the long hill overlooking the landing site. On our way some got lucky enough to spot a penguin looking quite different from the rest. With its yellow brows, smaller size, brown beak and a seemingly foul character was not difficult to identify it as a Rockhopper penguin. Quite an interesting sight as South Shetlands is far away from the species range of distribution, comprising Subantarctic latitudes, mostly thriving in Falkland Islands, all north of the cold waters south of the Antarctic Convergence area.

Once at the northern side of Barrientos, Gentoos share the space with numerous Chinstraps. All around Snowy sheathbills and Skuas keep trying to get a fish egg or a newly hatched chick, sometimes being successful. Despite the muddy ground, mixed with guano, and the wet cold weather, we all greatly enjoyed our first close encounter with the Antarctic wildlife and landscapes. The dark basaltic rocks and the green slopes covered by mosses or the annual growing algae Prasiola crispa, frame the penguin rookeries, while Europa sits at anchor at the background of the scene.

Back to the landing beach, we were picked up by the zodiacs, brought on board for lunch, and not much later to get ready for the afternoon activity. Plans were to land again, now at the Southwestern coasts of the same island where we set foot before, Barrientos. There we all hope to have a look at a different landscape, with ponds, basalt cliffs and spires, plus having the opportunity to encounter a bunch of Elephant seals, that often use the beaches of this area as a resting and moulting place. Barrientos represents one of the few quite reliable haul out place for this species in Antarctica, and we were about to try our luck ashore.

landing between shallows and rocks, wasn’t very difficult due to the improvement on the weather and sea conditions. From there a few steps uphill bring us to an exceptional view over this part of the island, with its characteristic fresh water lake, serrated cliffs and rocks awash at the distance to the north, and the rocky cliffs as a sort of amphitheatre half enclosing the site.

Starting our walk, we aimed to hike around the lake, having a look at the beaches and shores around it. We didn’t have to wait to long for the first sights of Elephant seals. Piled up in several groups of different number of individuals, there they lay down, as smelly as they can be, moulting their fur as they do every year. What we saw were mostly juvenile individuals and a few grown up females, some of them on the final stages of their moult, others already with a shiny new coat and ready to leave the island to spend the rest of the year at sea. Scattered all around them and along the beach lay countless whale bones, adding a most dramatic touch to the spectacular scenery. On the flats, several Skuas nest and up on top of the rocky outcrops Kelp gulls and Giant petrels lay also incubating their eggs.

After the fantastic afternoon outing, we returned on board for a deserved good dinner and to spend the night at anchor, until the early morning, to continue with our Antarctic adventures, now waiting for the forecasted strong winds that will make a question mark out of tomorrow's program, still with some other visits to spots in the South Shetland Islands.