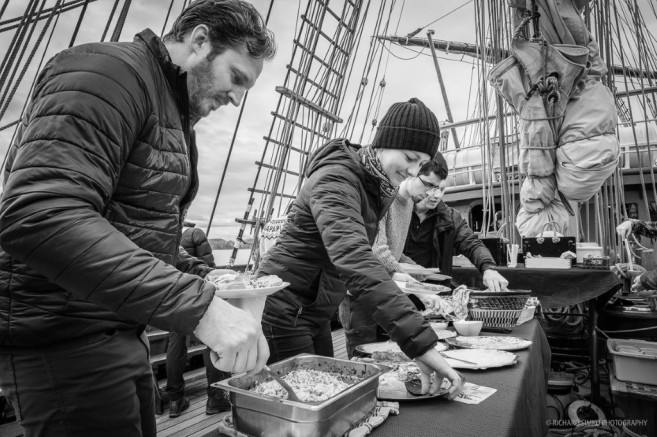 The weather during our change over days in Ushuaia was wet an windy. Not a bit moist, like now, but wet. On the 9th of January - the day our new voyage crew came on board, the deck was still covered by a tent and a cold wind was blowing as we had our introduction walks that evening. The next day however we woke up to a calm and sunny morning. Just hours before we planned to leave everything had calmed down. As predicted. And if the weather forecast would indeed stay as predicted – a very nice crossing was waiting for us.

We left Ushuaia as soon as the pilot was on board and started the first day with climbing instructions, familiarisations and lunch on deck. We had light headwinds, but it was overall calm weather, and hitting the Drake was not as eventful as it sometimes can be. Luckily. As sea watches for our voyage crew started, we motored onto a quite calm Drake – with still some swell and still some headwinds, but nothing to write blogs about.

When speaking of the Drake we often speak either of the Drake Shake or the Drake Lake – the former providing movement for sure, possibly combined with some sailing winds, the lather describing an absence of wind and a lake like ocean – obviously rare. This time neither of these terms apply, no, this time we are sailing a Dream Drake. After a night of motoring the wind turned to the West and later Northwest starting with a comfortable force 4 increasing to a nice 5. We have been under sail for a day and a night now – with a constant good speed and heading in the right direction. A beautiful sunset, hourglass dolphins bow riding for over an hour, conditions that allow us to climb on the bowsprit to watch them, time for sail training, long cues for dinner, a dream Drake it is.

But the hazy and intensely colorful sunrise looses some of its beauty once we learn it are the fires in Australia that cause the intensity, the smoke having traveled halfway around the earth by now. And a dream Drake it is, but not for everyone  – whatever the weather and however calm the sea – we are still on a tallship in the Southern Ocean and a first day at sea will always hit at least some with seasickness. Also this time the first night watches were only half manned. The Drake is still the Drake, though things look good, we make good speed without engine and we might have reached an all time record with less than 10 percent of the voyage crew being absent during our second evening meeting.