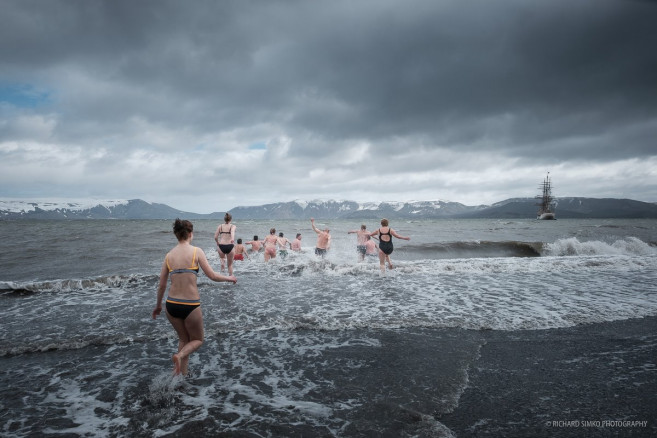 We have been in the Antarctic for 3 days now – not knowing yet that in a few days we will start calling this the South Shetlands in stead of Antarctica, as it is so clearly different from the high mountain peaks and all the ice closer to the peninsula. For now it is still the whole of our antarctic experience, and we say, this was our 3th day on the white continent.

Reading through reports from the early sealers – that came to the islands as soon as the world heard the first words about their existence in 1819 – one finds several elements that are mentioned over and over again. These elements are Wind, Fog, Snow and Rain. Often at the same time, and all of it horizontal.

Snow and rain we do not have these days – but it might have been balanced by a double amount of fog and wind. Fog on or day at Livingston, wind on our day at Deception. In such amounts that landings were doubtful.

On the morning of the 15th, as we were planning to land at Walker Bay, there was no Walker Bay. We had seen it as we anchored early morning, but as most of us woke up we could only hear the Elephant seals groan through the fog, we could not see anything. No land from the ship, and definitely no ship from land. How would we be able to land? Would that be possible at all? During the morning briefing it was decided to wait for half an hour and see how conditions would change before making other plans. Visions of a whole day on board, maybe two, were tangible in the deckhouse – but the nice thing with weather is that the only thing one can do is let it make the decisions. It is one of the first things the polar regions will learn you – whatever the plan, it is only possible if the weather has the same plans.  Miraculously – about 15 minutes after that announcement – the fog cleared and we could see where we were. We could land! See the fossils, the Elephant seals, the glacier and the (for Antarctic standards) lush vegetation of Walker Bay.

The next day our keyword was wind. Quite some wind on Deception Island. There is a reason for the name Deception. Yes, it looks like a nice sheltered caldera, protecting you from the Southern ocean from all sides. No the name was not a bad choice – the island intensifies more than it protects – and if we would have to find shelter, we would look for it outside rather than inside this black, glacier and snow covered island. On the 16th of January it was blowing SW, an unusual wind direction for this area, at least one we had not encountered before – which meant that entering the island through Neptunes Bellows felt like entering a surprise – would we be able to do what we hoped for? The short answer is yes – the longer answer includes a stern landings, drysuits, spray, waves and obviously a good amount of intensified wind.   But landings we made, morning, afternoon, evening – and that brings us to a 5th keyword – after wind, fog, snow and rain, which is maybe not specific for the South Shetlands, but it is definitely specific for our days there : the Tide.

After Walker Bay we went on to Elephant point – which means an impressive landing, but a rocky approach for both the ship and the zodiac – at any tide – and we came at what seemed to be extreme low tide. The zodiac rides were long and exciting, and that made the dinner late and exciting. Apart from a good overview over all the rocks on the Elephant point approach – it also gave us a rough idea of the tide, which proved to be very helpful by timing our visit to Pendulum Cove - known for its thermal water at the shore, which can reach 70 degrees and only at certain moments mixes with the surf in a way that it creates a ribbon of perfectly warm water along the shore. We happened to be there at such a moment. As the wind kept blowing and the fog would probably be back as soon as she stopped, we sheltered ourselves in a layer of warm water, or watched some others doing that, and summarized our days at the South Shetlands in three words : Fog – Wind - Tide.