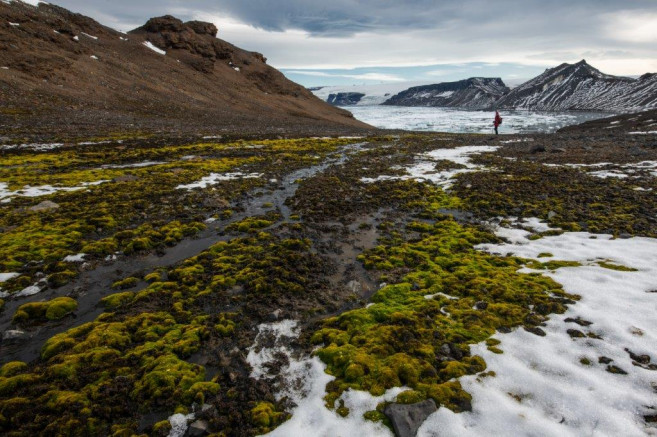 Hours of cold steering out on deck during the windy and dark night, finally saw us drop anchor in Pastorizo Bay on the east coast of False Island Point. A long detour to get here was necessary due to the large amount of packed ice blocking our way westwards, adding about 20 extra miles to our planned route. This, together with the Northerly winds blowing over 30 to 35kn, made for a quite late arrival to our anchorage. But in the early morning we sit quietly in calm waters. False Island Point is a mile-long narrow headland, connected by a low-lying isthmus to the South side of Vega Island. The site offers incredible views from its heights and over the surrounding mountainous scenery and the large amount of ice floes stranded on the long shallow beach. The shuttles ashore took a while, as the ship was anchored more than half a mile from the coastline and half of this distance was peppered with bergy bits and pieces of stranded sea ice. We had to find the narrow passages between them to reach the actual beach before we could set foot ashore. To the South, rise the high cliffs and glaciers of James Ross Island, to the West the so called Herbert Sound, a channel usually presenting heavy ice conditions that separates Vega and James Ross Island.

For us, besides enjoying a nice hike up the ridges leading to several hill tops, or walking around the lower areas checking both East and West sides of the long strip connecting them to the main island, there was a thing to have a look at: the ice concentration along Herbert Sound and our chances to navigate through it this afternoon. But first we all had some time along the beach where stranded bergy bits, growlers and brash ice made for countless pictures to be taken. A clean Crabeater seal skull was found along the shoreline, offering the opportunity to have a good look at their specialized dentition, evolved to filter their main nourishment, krill. Then a hiking group started to walk up the highest point at the head of the narrow peninsula. From there a breath-taking view of truly Antarctic scenery was revealed. The Vega and Ross ice caps slope down to the sea on numerous glaciers fronts, while the waters between them seem pretty open and inviting to sail through. The destination for this afternoon, The Naze, a peninsula extending South to North from James Ross Island, was in sight a handful of miles further West.

The terrain we hike through this morning, and also during the afternoon landing, is mostly volcanic, belonging to volcanic episodes during the Miocene geological period (the last 20 million years ago) that broke through layers of old fossiliferous sediments from 90 to 60 million years ago,  in a shallow water environment combined with an ice coverage over the area. All the hike went over seemingly lifeless terrain, but closer looks to the ground revealed ubiquitous multicoloured species of lichens and a large moss bed to avoid walking on, following the humidity offered by a meltwater stream. Along the valleys, there has been time enough for the erosion of the upper peaks to form a true soil, where permafrost patterns like stone circles could be seen.

As the group descended from up the hills, the ship already heaved anchor and was waiting for us closer to the band of stranded ice along the coast, for a quicker pick up. Just 8 miles away lay the destination for the afternoon, The Naze. A very exciting landing for all of us, including the guides since not even them have ever visited this site before. Already from the ship this site looked a bit different. There were lots of warm orange tones in the landscape, made more vibrant by a sunlight that made the rocks glow just a little bit more. The whole of Terrapin Hill shows this coloration,
with its 545m high rounded peak standing at the Southern end of the peninsula, while the two tops attaining 105m in height of the so-called Comb Ridge, just at the head of the isthmus show a darker colour.

With the ship safely anchored at some distance from the shore, we landed again amongst bits of ice on a long beach that rose towards the mainland in a slight slope and transforming into something that resembled a canyon-like formation from the distance. Arriving to a landing spot surrounded by shallows and stranded ice can be sometimes tricky, but our guides eventually found a good way. The landing itself didn’t present any difficulty. From then on it was new for everybody. First, to our surprise, we stood on a long sandy beach, something we haven’t experienced in Antarctica yet during this trip. Close by rested a skull of yet another Crab eater seal, similar to the one we found this morning but, in this occasion, belonging to an old individual, showing the worn out but still distinguishable special set of teeth this species possesses.

Continuing the walk along the beach, we aimed for the foot of Terrapin Hill and its orange rocks. A band of ice bits alongside the beach as far as we could see, created a nice leading line towards the rock formations in the far background. The sun soon disappeared behind a chaotic sky where spectacular Altocumulus Lenticularis, with their ovoid and lens shapes were mixed with cumulus of vertical development at different levels. That included Pileus formations on top of the rest, while in some parts of the sky Mammatus clouds hung from their menacing tops. Most clouds form in rising air, but the mammatus forms in sinking air. They derive their name from their appearance—bag like sacks that hang beneath the cloud and resemble a cow’s udder. Veiling the sky behind all of them, spreads
what appears to be a thinner layer of Cirriform clouds, often visible to us by the sun-light dispersion patterns they produce. Those high clouds contain ice crystals with a hexagonal plate like shape, which tend to fall slowly orienting themselves horizontally. When so, the ice crystals act as small prisms, refracting and dispersing sunlight that passes through them. If the sun is low in the sky, sometimes we can see one or two brightly coloured spots, one on either side of the sun, called Sundogs.

All in all, this made out the sky into one of the highlights of the day, just perfect for a nice landscape shot. Walking the beach, we came across a snoozing Weddell seal. Other than that and a few skuas the place seemed to be deserted. After walking for a while, we reached the point where we left the beach and started to walk uphill arriving at a beautiful and quite odd plateau. Actually, the whole area looks more like a scene from Mars than any place on earth.  But unlike the dry Mars surface, we come across a few freshwater ponds and running streams. We dive into the most amazing rock formations, a mix of the fossiliferous old sediments that characterize the area, plus basalt's and lava's from more recent periods. Anyway, although the geology of the place is quite similar to the surrounding areas, here it comes to the surface in the most spectacular way. Black volcanic boulders lay scattered all over the orange landscape, a product of the oxidation of eroded and burned out
sediments and fine-grained volcanoclastic rocks. Over our heads the skies were dramatically evolving, taking a grey-bluish tone that very nicely contrasted with the warm colours of the rocks. While enjoying the out-of-this world landscape, the wind steadily picked up, and the earlier calm sea had become more choppy. The Europa in the distance was reduced to a mere spot in the landscape. That’s how far we walked before returning to the landing site and called the zodiacs for the ride back on board. Better to come back with a bit of time for the ship to manoeuvre out of the ice maze safely, with enough daylight left for the safe navigation towards ice free waters. First through Herbert Sound, then rounding the west coast of Vega Island to reach the southern shores of Devil Island, where we plan to spend the night and land tomorrow morning.

But as very often happens in Antarctica and even more particularly in the Weddell Sea, weather and ice have different plans than us. It didn’t take long after leaving The Naze, for the wind to pick up to 30, 35 and even gusting 40kn, while some areas of densely packed sea ice leave relatively open waters between them. In those conditions it was not until past midnight that we reached Devil Island. Instead of anchoring, the strong gusts made for making way again to more open waters and try again tomorrow morning to approach the island for our activity ashore.