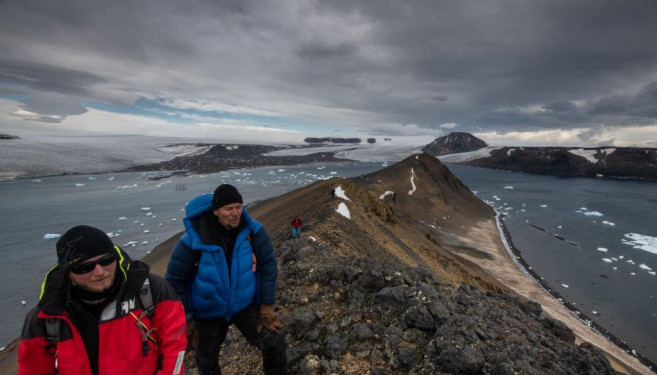 After an adventurous night, with strong winds gusting up to 40kn, after a forecast that predicted about 15kn, and dealing with drifting ice, it proved not possible to drop anchor at Devil Island, even though we were there even before midnight. Europa drifted and stood her ground in the open waters of the vicinity overnight, to try again our luck in the morning for a landing in such a beautiful destination. Devil Island is tucked into in a large embayment on the northern shores of the large Vega Island, and by breakfast time we were getting into the channel between both.

Still in quite strong winds, 25kn steady but gusting up to 38kn now and then, Europa drops anchor over a relatively shallow spot that prevents large icebergs to drift over it, providing a relatively good anchorage. Nevertheless, a second anchor was necessary to properly hold our ground. In front of us, the one mile long and narrow Devil Island, with a low summit at each end resembling the horns of the Devil, which give it its name. Such a descriptive denomination was given to the island by the already well known to us, Swedish Antarctic Expedition under Nordenskjöld’s command that lasted between 1901-1904. We have been following their steps for the last few days, as they discovered some of the most interesting places in this area of the Weddell Sea. Relevant to their story as well is the large conspicuous cliff of Cape Well-met, the close by headland of Vega Island, visible during all of our landing and scene to another epic moment in the Nordenskjöld saga. In that epic story of Antarctic struggle and survival, at Cape Well-Met the three men that overwintered at Hope Bay and were making their way towards Snowhill Island, literally walked into Nordenskjold’s sledging party, exploring the Prince Gustav Channel on 12 October 1903.

Dealing with the strong winds and after a challenging shuttling ashore with the zodiacs, soon we landed at the foot of the saddle that separates both mountain tops of the island. The good weather contrasted with the sudden powerful gusts of wind, but notwithstanding we could enjoy a great time ashore. First walking over a plateau towards the northern side of the island. From up the saddle the scenery change completely, opening the views to the waters of the Weddell Sea, James Ross Island as a glaciated background and in the foreground several small groups of moulting Adélie penguins, again late season remnants of the several thousand couples that nest along the lower slopes. We made our way to the northern beach, taking our time to photograph small groups of penguins and a solitary Fur seal snoozing over the brash ice left behind along the coast in the low tide.

Back up in the saddle, our guides proposed to walk up one of the peaks of the island, an easy climb to gain some height for a magnificent panorama of the area. A well-trodden path led us to the rocky top, where the strong wind made us sit down for a while and look for some shelter, while everybody who joined made it to the top. From there, the Devil still have a second horn, this one slightly more
difficult, but with equally fantastic views as the first one. Just a small group joined this walk, first over wind swept rocky slopes that made for us to use hands and feet to progress and avoid being blown
away, then over a narrow ridge leading to this Eastern top, where the wind calmed down and allowed us for an easy progress to the top. After a couple of pictures from up there it was time to start our way down to the landing site, where the pick-ups were still relatively complicated due to the shallow waters in the low tide and the strong winds, but soon we were all on board in time for a deserved lunch.

Both anchors were hoisted after our meal and Europa headed North, straight to the scenic Duse Bay on the south side of the Tabarin Peninsula, that indents this 15nm long and 12nm wide headland of the Antarctic Peninsula itself. About three hours of navigation on decreasing winds brought us there, where we planned to cruise along with the ship. First hours of the afternoon we enjoyed the views from the deck, watching the two peaks of Devil Island shrinking in the distance. For those interested in photography, Ricky had a talk in the lounge about Lightroom post-processing techniques. The rest of us who stayed on the deck enjoyed the surroundings. Soon after we passed Break Island on port side and the southern tip of the Tabarin Peninsula on starboard, Europa entered the waters of Duse Bay. By then the wind had died down and Europa was motoring through the much calmer waters alongside the steep shores of peninsula. The interior of Duse Bay is heavily glaciated and Europa pierced her way through a few big patches of brash ice from recent glacial calvings.

On the east side of the bay, we approached the rocky coast where several glacier tongues flow from the ice-cap above. They have a fitting name: Seven Buttresses. With their 150m in height they are separated by narrow icefalls and extend for 4nm along the W side of Tabarin Peninsula. Like all the geographical features of the area, they were probably first sighted by a party under J. Gunnar Andersson of the Swedish Antarctic Expedition, 1901-04. But surveyed and named by the Falkland Islands Dependencies Survey (former British Antarctic Survey in 1946). As we got deeper into the bay, the wind has almost completely died out and the time on the deck was more pleasant. Occasional pools of light nicely illuminated the mountain slopes and the glaciers. As the dinner time approached, Europa turned the engine off in close proximity to the Mondor glacier., showing its 3.5nm front, as it flows into Duse Bay. It was first mapped in 1946 and 1956 by the British who named the feature in association with the Tabarin Peninsula, which name comes from the military operation "Tabarin" in Antarctica during WWII, and was derived from the "Bar Tabarin" in Paris. Originally, Tabarin was the buffoon who attracted the crowd to the booth where Mondor sold his quack medicines.

With the sun getting lower on the horizon, the harsh sunlight became a little softer and warmer. After dinner, we came back to the deck and enjoyed the beautiful sunset. The skies were partially cloudy and with passing time the warm tones on the clouds got more saturated and red. After our “eight o’clocky” briefing we enjoyed a birthday cake made for Livia and Jan. With fading light it was time to turn the engine one and make our way out of the bay towards our next destination. As if we didn’t have enough good treats today, a big bright moon appeared behind the mountains on the horizon. This was a perfect end to a great day. As the darkness fell upon the ship, some of us retired to the deckhouse to enjoy a drink, while others preferred to go through photographs captured during the
day. As usual, another exciting day is awaiting for us tomorrow. If everything goes according to plan, we can perhaps finally set a foot on continental Antarctica.