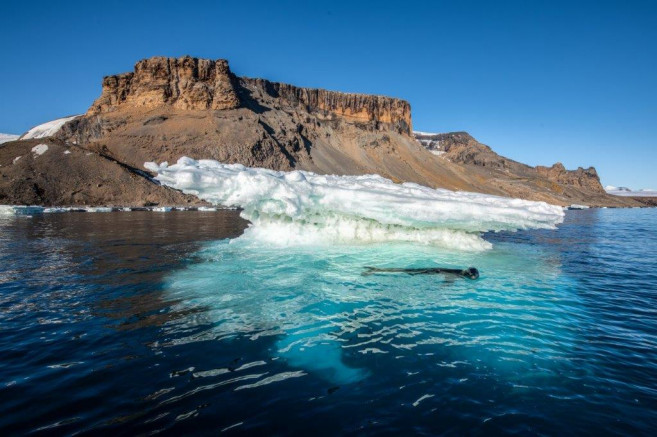 Leaving Duse Bay after sunset we spent the night slowly making our way around the Tabarin Peninsula to reach Brown Bluff in the morning. On the way, Europa encountered some giant patches of sea ice and sailed through Fridtjof Sound dodging some tabular icebergs, which were almost completely blocking our passage. By breakfast time we were already under the large orange coloured cliffs of our planned destination.

Soon Europa finds a suitable anchorage beneath the towering rust-coloured steep cliffs of Brown Bluff, flanked by vast glaciers. A band of stranded ice along the coast separates the ship from the 3.2km long beach of volcanic erosion products from the rocks around. The area provides good nesting ground for a large colony of both Adélie and Gentoo penguins that spend the Antarctic summer here, each species on different sides of the shore plain. And so, as we land, many of them approach us, studying the newcomers to their home. This behaviour is mostly observed on the late Gentoo chicks that still roam around the beach, while moulting adults prefer to stick to their sheltered positions. A handful of the remaining Adélie’s look almost ready to jump into the sea and disappear until next spring. But the comings and goings to and from the sea proved to be quite
challenging as at least a couple of hunting Leopard seals patrol the coast. Now, at the end of the season, resting at the beach also numerous Fur seals recover from their breeding efforts.

The surroundings are impressive and with the spectacular weather of this morning it all makes for basking around in the sun on the beach on our first landfall in the Antarctic Continent itself. But after about an hour or so, many joined Jordi and Maria up the moraine next to the bluff, while the others preferred to roam the beach, looking at the scenery and enjoying its silenc, before walking around the moraine and explore the southern side of the landing, where glacial landscape dominates the area.
The hike up the hill climbs over the loose sediments and rocks from the lateral moraine of the glacier that here drains ice of the Northern Antarctic peninsula ice cap to the sea.
The views from up there are amazing and instructive at the same time, showing many of the glacial structures that we have been explained during lectures and talks during the trip. We move close to the edge of the orange cliff that names and reigns over the whole landscape, looking down, the slopes lead to the penguin rookeries and in the background the waters of the Antarctic Sound, where scattered tabular icebergs pepper the view. In the distance and amongst the growing fog bank that develops during our time ashore, the ice caps and cliffs of the Joinville Island Group.

But most impressive from the heights is the view over the gentle icy slopes of a tidewater glacier, that on one side ends up on the rocky shoreline, while at the other shows its vertical calving glacier front. Perched above all the landscape from the glacial moraine, we could appreciate the unique geology of the area and how the glaciological processes sculptured the landscape. It is considered that the vulcanism occurred here during the Miocene, that is younger than 20 million years.

In many areas it started beneath the cover of glaciers and ice caps, giving quite special geological structures. As we walk by, we leave behind clastic volcanic boulders and a display of one of the world’s best examples of pillow lavas. Magmatic eruptions, when the lava flows under high pressure and cold environment, come up like blobs that pile up one upon each other. This is a typical condition from volcanic eruptions that happen in deep oceanic waters, or like here, under glacier ice.

Between us and the glacier surface just lies a short steep downhill walk, carefully descending over the old moraine that in some areas still holds ice under the rocks and sediments. Down below we ended up straight onto the ice. There, the ice had quite good grip and we could walk down next to melting stress running at its surface until reaching its front.

Once at the beach and before making our way back to the landing site, we still got time to approach the calving part of the glacier front. Luckily enough the very low tide allowed to reach the coastal rocks in front of the icy cliffs. There we spent time enjoying the spectacular views, decorated with groups of penguins and sheathbills, stranded sea ice brought by the tides, and ice blocks fallen from the glacier front. Zodiacs were soon called to pick us up and straight away Europa made her way towards Hope Bay, where we were to visit an active Argentinean Antarctic Station, to round up our days in the Weddell Sea area, before heading to the South Shetland Islands.

We anchored in Hope Bay before lunch time, and while having our meal it was agreed by radio communications with the Esperanza Base Commander, to start disembarking operations at half past two. Our guides went first to prepare our landfall, and soon we were greeted at the landing spot by some of the officers living here for a year. They will guide and accompany us during our visit, that for better logistics will be in two groups, with Maria and Jordi translating their explanations.

The Base was inaugurated on December 1952 and since has been manned by Argentinian Personnel. They are accompanied during the summer months by countless Adélie and Gentoo penguins. Today, just a few of them are around finishing their moulting, the others are out at sea until next spring. The Station is devoted to research projects related to glaciology, seismology, oceanography, coastal ecology, biology, geology, and limnology, while all the logistic support is organised by Army, Navy and Air Force personnel. While scientists usually stay at Esperanza during the Antarctic summer, the support crew spend the whole year here. From November 2019 to December 2020, 63 people will make their living in the Base, including 15 kids of different ages and 10 of the officer’s wives. Being like that, a school is needed for the youngster’s education, and indeed it started to function in the late 1990’s. Before that the children were home-schooled, since they were allowed to come here in 1978. The base has an Argentine civil registry where births and weddings are recorded. And even since 1953, 8 babies have been born in the base being the first truly Antarctic citizens in the world, the first one being Arturo Palma. With all the people living here for so long, schoolteachers, doctors, nurses and dentists are part of the yearly crew as well.

Esperanza is one of only two civilian settlements (although managed by the Navy and Army) on Antarctica (the other being the Chilean Villa Las Estrellas located on King George Island, in the South Shetlands). The wonderful weather we had today made for many to ask about the meteorological conditions around the year: normally in summer the temperature at the Station can reach a maximum of 10 to 16°C (being normally just above 0ºC), but this year they recorded 18.3ºC, the highest temperature recorded in Antarctica.  In winter the place can be as cold as -35°C, with about 2m of snow blanketing the area.

Our visit to the Station included a first stop at the stone hut built in January 1903 by Andersson, Duse, and Grunden, members of the Swedish South Polar Expedition led by Otto Nordenskjöld, which steps over the Weddell Sea we have been following during the last days. They had to spend 8 months here after failing their attempt to bring the bad news to the Nordenskjöld party at Snowhill Island about losing their ship, the Antarctic, crushed by the ice. The marooned crew of the sunken boat ended up at Paulet Island.  Each party was unaware of the fate of the rest until they had a lucky and coincidental reunion more than a year later, rescued by the Argentinian Ship Uruguay.

Other places we were allowed to visit during our walk around the Base was their open-air museum where machinery from the 50’s is still exhibited, the proper museum with information banners, fossils from the nearby Mount Flora, old scientific instruments used here many years ago, a section on Natural History of Antarctica and the clothes and sledge used by the Argentineans to reach the South Pole in 1965.

We passed by their chapel, where is proudly exhibited as a relic a piece of bone belonging to San Francisco de Asis. Next to it we visited also the school, empty today as it seems to be Saturday. There was still a bit of time before coming back on board to send postcards and buy some souvenirs from the Base.

While we enjoyed our time ashore, more than 20 of the Argentineans living here were welcomed on board to have a look around our beautiful ship. They are used to the visits of few other motor vessels, but as usual, Europa stands out wherever she goes. While still getting ready to embark the zodiacs, we could already see how the crew was busy aloft unfurling top sails and top gallants, all ready to set sail soon after we arrive on board.

And so it was, motoring the first bit to get off Hope Bay and catch a more steady wind, soon engines are turned off and sails set. Both our Jibs followed, then Mizzen Top Staysail. Like that we sail for a while, under 25kn of SSE.-ly winds. The fair winds soon make for setting Lower Staysails too. But just about 21:30, as forecasted the wind started to decrease, not being possible anymore to keep the good speeds we had so far of 6.5 to 7kn. Time to start engines once more if we want to be somewhere in the South Shetland Islands for tomorrow morning. About 85nm to sail from the Antarctic Sound to Fort Point in Greenwich Island, across the open waters of the Bransfield Strait.