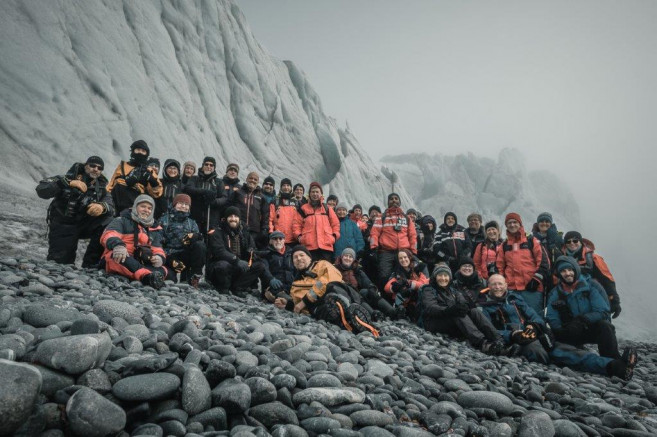 Crossing the 85nm of the Bransfield Strait from Base Esperanza to Greenwich Island, where we plan today’s activity morning, proved to be a calm crossing. At the beginning we had 25kn of SSE-ly winds, then backing to the east and decreasing until it became too calm for proper sailing and we put our engines to work again to keep a speed just below 7kn to reach the South Shetland Islands in time for some morning activities. This archipelago of large Antarctic Islands was identified in February 1819 by William Smith, an English sealer on his brig the Williams, when he was forced far south while rounding Cape Horn. On this unexpected detour, he spotted land and reported it to the Royal Naval Authority for South America upon his return, but his observation was dismissed. Not stopped by that, Smith went south again four months later but was beset
by ice, and returned unsuccessful. Yet again, undeterred, he set off once more, this time with fortune on his side. He cruised north past Desolation, Greenwich, Robert and Nelson Islands, and set foot ashore at King George island, where he claimed the new discovered lands for his King and country. This time, his efforts didn’t go by unnoticed and the British Naval authorities chartered his ship and himself as the pilot. In command of this official expedition was Edward Bransfield, Master of the ship and the senior officer of the South American Royal Navy. For us, like sure they did before their discovery to many explorers and sealers in search for the last continent or for new sealing grounds, the islands seem to hide behind a thick fog bank, shy to reveal their secrets. Navigation all the way to the anchorage had to be made with the help of the radar, as visibility was very poor.

At the beginning nothing could be seen from our decks, but as soon as the island contours revealed themselves behind the mist, three bells rang to call everyone to the briefing on deck. Calm seas were promising for a landing here at Fort Point. Veiled by the fog and just visible from time to time, this quite dramatic rock point projects to the sea from the glaciated Easterly coasts of Greenwich. It is exposed to the open waters of the Bransfield Strait and its capricious weather conditions.
Because of that and the poor charting of the area as well as the reduced space ashore for big groups of people, makes this spot a seldom visited area. Nevertheless, it is becoming quite a traditional spot for Bark Europa. Its narrow peninsula has two possible landings at either the northern or southern shores, and despite never being the easiest landing, it is often possible to use one of them depending on the sea state. It is a relatively small area, so it offers the chance to spend time ashore to soak in the wild beauty of the spot. Amongst the fog banks adding a dramatic touch to the scenery, the large glaciers tumbling down the slopes of Greenwich Island here reach sea level, and between two of them stretches the boulder beach where we
land. At is end, spectacular jagged basaltic cliffs are home to Antarctic shags, and at its foot along a flat accessible area, thousands of Chinstrap and Gentoo penguins nest. Sitting amongst them often a couple of Macaroni penguins can be seen. This species is not really an Antarctic one, but typical from South Georgia Island. And today was our lucky day for them, as both partners were quietly standing in the middle of the Chinstrap rookery.

After a good look at them it was time to walk a bit more along the cobbled land spit towards the glacier fronts in the distance.
The northern beach was rougher than the place where we landed, and covered in brash ice as well. Many Fur seals were scattered all around making our progress slow and careful. The surroundings are of the most impressive and wild beauty, hardly matched by any other place in the South Shetlands. And it was just about to get better when we reached the
foot of the calving glacier front at the beginning of Fort Point peninsula. We gathered next to the imposing vertical front for some pictures, while the swell was breaking at the narrow boulder beach beneath it.
Next thing to do during our time ashore was walking towards the distinctive Nunatak that characterises this place, a rocky mountain with nearly vertical cliffs on all its sides showing itself as an island amid the ice field. Around the basaltic rocks these formations show a melting area of the ice. The dark rocks, once they get free of the ice covering them, get warmer than the surroundings and gradually melt a space around them. Here its lower part is nowadays open to the beach, allowing a safe
approach. But due to the lack of snow and the large amount of ice melting, specially this season, today the short walk ran over rock blocks, making it difficult to climb high up the mountain. Our guides decided to start our way back from there, making a detour to have a look along the picturesque beach and its inhabitants, mostly again Chinstrap and Gentoo penguins, together with small groups of Fur seals.

Lunchtime was getting closer, and zodiacs were ready to bring us back on board. From then on, just 8nm over mirror calm waters and reduced visibility due to fog, separate us from Half Moon Island. Arriving there, again nothing could be seen, with the high mountains of Livingston Island at the background of Half Moon Island behind a thick fog layer. But conditions as usual were ever changing, and after a while, the coastline comes into view in a ghostly appearance. First sights were from the buildings of the Argentinean summer Base “Teniente Camara”, not occupied that late in the season. Then the fog gets
shallower and we catch glimpses of the 1700 metres tall Mount Friesland on Livingston Island. But our time ashore was to take place on the more attractive part of the island inhabited by a large Chinstrap penguin colony. Next to the landing site a wooden boat (dory) left here during the intense sealing and whaling times the area went through since 1821, made for interesting pictures while waiting for the zodiacs to finish their shuttles from the ship. From there a trodden path lead from the
beach to the first penguin rookeries, perched on picturesque rocks up the hills. A short walk alongside rocky slopes brought us to a larger cobble beach, where some Fur seals snooze together with a large Weddell seal. Up the rocky outcrops in the background more Chinstrap rookeries buzz with moulting animals. And amongst them, a good look revealed yet
another Macaroni. Half Moon is often home for a few of those penguins, but even so, they are always difficult to see in Antarctica.

On our way back we still came across some more historical remains, now we could see remains of sealers equipment and oil barrel metal rings, where some Fur seals seem to defy the gruelling past and stand their ground over the artefacts.
The fog seemed to be clearing up gradually and the wild rugged landscape of Half Moon started to contrast with the now visible huge glaciers of Livingston Island.
Back on board, we spent a quiet evening at anchor on the changeable foggy conditions, which from time to time offered great views of the high peaks around. And about midnight it was time to start our way southwards to Deception Island.