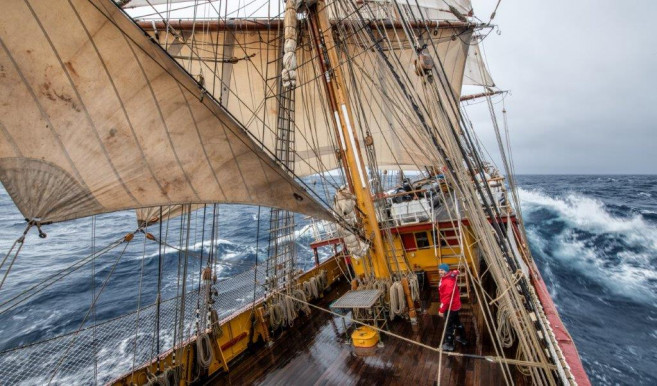 Good sailing all day, but marked by variable winds, changeable weather and passing squalls. Fast moving clouds that are usually accompanied by sudden wind gusts immediately followed by precipitation, making for all of us to endure the harsh conditions out on deck and aloft.

In the early morning the 15 to 30kn wind start shifting to SW, but by breakfast time it had increased to 35kn, gusting 40kn and the waves were building. The outer jib, middle staysails and topgallants are taken away and furled, while the aap replaces the larger Desmond over the main deck. Steering on a 155º course we reach speeds of 6.5 to 7kn. Heeling to portside as she does, pitching and rolling in the developing swells of the Drake Passage, the Europa makes sea-sickness pay a visit to the ones that are still to get their sea-legs. Watches see a reduced number of participants, and same with the few that feel like following the crew and guides lectures.

But the weather and sea conditions kept changing, and by lunchtime the wind dropped, calling for setting more canvas again. Soon after Europa sails the Drake Passage under full sail but the upper staysails and Royals. Later the wind seems to stabilize a bit more around a WSW-ly of 20kn and also the royals are set. All an all, a day full of the typical changes offered by the Drake Passage, always challenging for the sailors, since it was first sighted by Sir Francis Drake, the second person to force a route through and circumnavigate the planet in a westward direction, about 60 years after
Magellan.

In our own southbound adventure, we have covered a distance of 218nm since departure from Ushuaia, making a good stretch of 145nm during the last 24h. Ahead of us still lies 365nm until reaching the shores of Elephant Island.