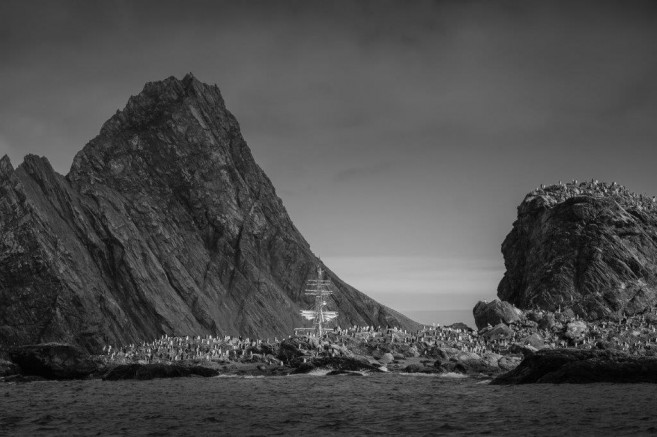 After a night of good sea conditions, motoring our way towards the northern coasts of Elephant Island, we wake up with the full spectacle of its coasts shining under the early morning sun. It is not often at all that the entire coastline of the island is visible, as usually the area is covered by low clouds, foggy weather and reduced visibility. The stunning views are completed by the many Fin whales that blow all around as we approach our destination, the rocky outcrop named Point Wild.

Fin whales find good feeding grounds here along the steep change in depths all around Elephant Island. They don’t usually venture on shallow waters, but they prefer the steep change on the sea bottom topography between the continental shelf of islands and coastlines, and the great deeper plains and trenches.

Approaching our goal for the morning, we pass by the spectacular rugged rocks and islets of Sealers Islands, called so because they were used by the early sealers in Antarctica in the 18-hundreds, being the pioneer Captain William Smith on board the Williams. That was as soon as in the year 1820, when during his third trip of exploration in the area, officially reported for the British Admiralty the sighting of the South Shetland Islands. Clear skies and light winds help our progress to get to our planned destination after breakfast. Despite the good weather, the desolate and jagged landscape can give us an idea of how harsh the environment and the conditions can be here, along the severe looking coasts of Elephant Island.

Top Sails soon are clewed up, staysails taken away and Europa reaches her anchorage just west of Point Wild. Here we join part of the historical Ernest Shackleton most known Antarctic adventure. Our guides and also through the documentary broadcasted last couple of nights in the Lounge, have been introducing us to such an incredible adventure and quest for survival which the so called Imperial Trans Antarctic Expedition ended up being. Such an ambitious project was born after the South Pole had been reached by Amundsen in 1911. from then on according to Shackleton there was only just another great goal in the Antarctic exploration: crossing the Antarctic Continent via the South Pole.

Shackleton plan involved starting the crossing from the coast deep into the Weddell sea, march to the South Pole, and continue the known route previously taken by Scott to the other side of the continent, ending up in the Ross Sea. However things turn out very differently. Departing from South Georgia ion 1914, it didn’t take long once they reached the Weddell Sea until their ship, the Endurance, got beset into heavy pack ice. From then on the story unfolds into a tale of hardship and indeed,endurance. The ship was lost, crashed by the ice, and the 28 man had to survive living on the ice floes for many months until finally reaching land in April of 1916. But this land proved to be yet another challenge for them. Apart from rocks and big swells, ice and a few penguins and
seals still left in the area at the end of their breeding season, there is actually nothing there and no means of salvation. They reached Elephant Island, where they set foot ashore for first time in over a
year and a half, on the wild rocks of the nowadays called Point Wild, just next to where Europa drop anchor today. Right here, albeit we think as an impossible feat just having a look at the rugged landscape, 22 of Shackleton’s men lived for about 4 months. Having a close look at the rocky cape with our zodiacs, dealing with long breaking swell, high tide, rocks awash and others barely submerged, how these men managed to spend here all this time and even how they managed to not lose a single live and to get all away safely from here, is hard to comprehend.

Dry and warm in our modern sailing gear and rubber boats, we can just imagine how it was over 100 years ago, with classical canvas and wool garments which they haven’t got the opportunity to change in months and months of wet, cold and miserable struggle for survival at sea and over the ice. And rowing and sailing on three sloops they incredibly managed to reach the northern coasts of Elephant Island coming from the depths of the icy Weddell Sea, disembarking at Point Wild. And wild it looks indeed, but it is not because of those conditions that the place receives its name. It is because of Frank Wild, Shackleton's known right hand, who was left here in charge of the stranded men, while Shackleton, Captain Worsley and four other crew members set out on yet another historical sailing crossing. With no means of being rescued if all of them stayed in Elephant Island, a desperate solution was found, what it looked as the only option to get help: sail about 800nm of the
open waters of the so called Scotia Sea, one of the roughest seas in the world, to South Georgia Island. All in a 22 feet sloop, and at the gates of the winter. And they actually managed after 16 days of terrific sailing, the 6 men made it to South Georgia, ending up on the Southern coast, crossing the unmapped, heavily crevassed and mountainous interior of the island to find help on the Northern coast, and finally rescue the party stranded at Point Wild.

Such a breath-taking place we could enjoy today from our zodiacs, while slowly the sunny weather that welcomed us here early in the morning was changing to an overcast and foggy afternoon. But taking advantage of the fair morning conditions we drove close to calving glaciers and cliffs, rocky outcrops covered with moulting Chinstrap penguins, now busy growing new coats that will last for another year, and approached Point Wild itself. Nowadays the point is home for a sculpture honouring the Chilean Captain of the ship Yelcho, which was the one that after few attempts with other boats, Shackleton could finally reach again Elephant Island on his rescue mission.

A handful of Elephant seals lay around on the shoreline, together with many Antarctic Fur seals. Blue-eyed shags fly around curiously checking our boats, Skuas fly by and Snowy sheathbills look busy feeding around the penguin colonies. A solitary Leopard seal show up for a while, gracefully swimming and diving quite close to the zodiacs. Before lunch everybody was back on board, and our ship was ready to heave anchor and make her way towards our next destination in the Weddell Sea. Already under drizzle and fog, we motor along the north coast of Elephant Island. The shoreline that so spectacularly showed up this morning, now hides behind the clouds. Just a few rocks and ice could be barely seen of the easternmost tip of the island, Cape Valentine, as we change our course, now rounding this cape and sailing south.

At that point, increasing NNW-ly winds over 20kn, make for bracing almost square and set sail with the help of many. Top Sails first, then Top Gallants, Head rig and Main Course, allow to stop the engines and enjoy the good sailing during the rest of the day. Tomorrow will be a day at sea, leaving behind the South Shetland Islands and making way to the Weddell Sea, where we plan to arrive in the late evening. After enjoying the couple of hours of great weather in Elephant Island, now just another day of Sea-watches separate us from the first landings in such a legendary place.