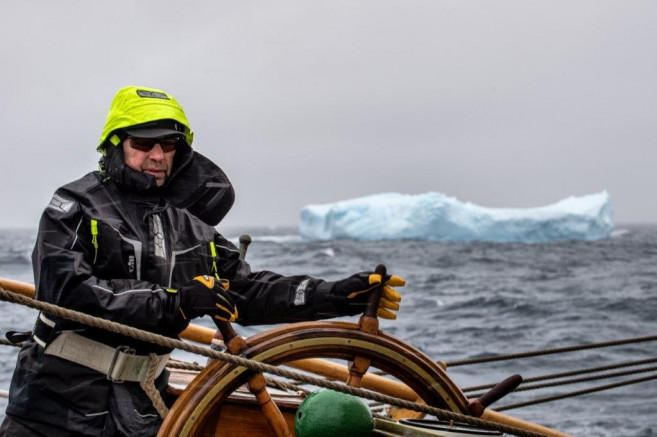 The dark hours of the night came with a NE-ly wind increasing to 20-25kn and already before midnight it was backing to the northwest. That made for a bit of challenging sailhandling in the darkness, under cloudy and rainy weather. Taking down the main course was followed by lowering the topgallants and outer jib, having everything furled. Until that moment we have been following the backing winds, adjusting course from 240º to 190º, now we brace accordingly to keep a course close to 180º.

Before dawn we were running into increasing amounts of icebergs, growlers and bergy bits, together with 26 to 30kn of still backing winds. With the wind from the southwest, we braced sharp on starboard tack. Also the aap (mizzen staysail) was struck and furled to aid in forward visibility. Since we got into the icy waters north of the Weddell, the lookouts have been busy reporting countless growlers and ice bits, first shinning under our powerful xenon-ice-lights rigged at the tip of the bow-sprit, then under the grey light of a cloudy morning.

Getting into the icy waters of the Weddell Sea, the temperature has dropped considerably, with air and sea surface temperatures just below 0ºC. Steering the ship under those conditions required concentration and paying attention to the countless ice reports from the lookouts on the foredeck, changing course often to avoid it. We could also feel the leeway to portside due to the strong winds plus the intense surface currents in the area. Here the major Circumpolar Current running clockwise around Antarctica meets the northernmost outflow of the also clockwise Weddell Sea Gyre. The Joinville Island group, located SW of us, plus the tip of the Antarctic Peninsula itself, create an area of turbulence and mixing currents.

Running through areas with an increasing concentration of tabular icebergs, icebergs and bergy bits, many black browed albatrosses fly around, offering a not so common spectacle, with such magnificent birds gliding alongside stunning icebergs. Before lunch the wind already started to ease down, and in a span of a couple of hours actually decreased to less than 10kn. Shortly after lunch, and with just a light breeze from the SW blowing over the gradually calming down waters of the Weddell Sea, we turn on the engines and sails are taken away and furled, finishing our approach
to Danger Islands motoring. The weather was improving and by dinner time, while we stop engines and drift on what seems a patch of open water 10nm from our destination, we enjoy a great sunset surrounded by fantastic icy landscape.

Overnight we plan to just drift, away from the denser concentrations of ice, and start our last bit of approach to Danger Islands with the first light. From now on we will venture into the treacherous waters located to the East of the Antarctic Peninsula, the so called Weddell Sea. Our first planned visit here are Danger Islands, a group of eight islands located to the East of the large Joinville Island, just at the NW mouth of the vast expense of the Weddell Sea. Such a descriptive name was given by the explorer James Clark Ross on 28 December 1842. James Weddell, in his quest for hunting seals and thanks to his adventurous spirit, had sailed already far south in the sea that nowadays bears his name, but he did it mostly on the open waters East of here, in 1823. It took almost 20 years
for James Clark Ross to brave the waters closer to the coast. As he was rounding the East shores of Joinville Island in grey and foggy weather, without noticing he was approaching a group of small but hazardous islands, over a jagged sea bottom. Suddenly Ross realised that he was as close as three ships lengths from the so named Darwin Island. He reported that “the cliffs of the island, through the fog, appeared so perpendicular as to admit the ship going alongside, and well it was that they were seen in time to avoid running against them, as we had no suspicion of being near land”. He had been sounding every 15 minutes without finding bottom.

The Weddell Sea has been the framework for lots of the classical golden age of Antarctic Exploration stories. Many illustrious names have challenged its freezing cold weather and ice filled waters, including Captain Cook (who tried to find the Southern Continent sailing deep into the Weddell Sea amongst other bold navigations in Antarctica), James Clark Ross, the Swedish Nordenskjöld, Shackleton, and many others. But who gave name to this mostly frozen expand of water was the Sealer and Explorer Captain James Weddell. Who, on his second expedition to Antarctica with the ships Jane (under his command) and the Beaufoy (with Brisbane as Captain) and in search of new lands East of the newly discovered South Shetland Islands, decided to head south. Both ships bravely began their way into the cold waters southwards on the 4th of February 1823, starting their historic journey. The two small ships endured rigorous and cold weather, until sun shone again over the sea
ice and tabular icebergs around them, and he could determine his position on the 20th of February. They were some 214 miles further south than Cook had achieved on the 31st January 1774.
There was still no land in sight, but cleverly Weddell decided to turn northwards again, eventually reaching back to England in July 1824. It was already quite late in the season, with the peril of getting stuck in the ice, plus by then, there was no certainty of the existence of any land mass towards the South Pole. They had pushed further South than anyone before them. Their southernmost position would not be over-passed until the Wilhelm Filchner scientific expedition, nearly 100 years later in 1911, actually saw the continental lands further South.