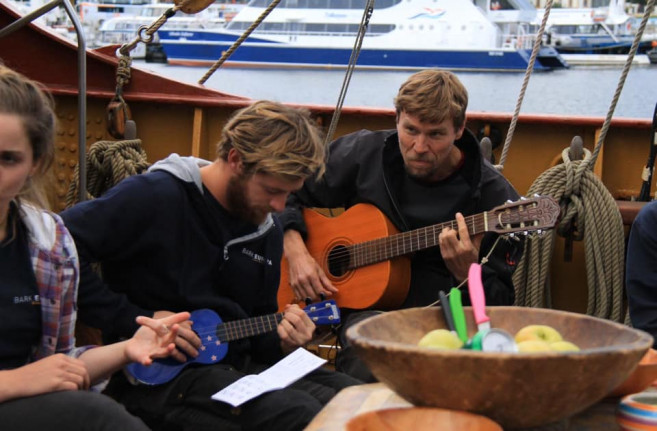 We realised about the pandemic global situation during our crossing the Drake Passage. The virus was expanding rapidly and the borders were beginning to close but we were in a microcosm oblivious to everything in which the winds, the weather and navigation were our absolute priority. When we received the first signs of a possible blockade, our priority was to get to Ushuaia as soon as possible so that the voyage crew could travel back home safely.

As we were navigating the Beagle channel, we heard on the radio that Puerto Williams had closed the port and that Ushuaia was surely about to do so too, but whoever does not risk does not win and we managed to enter Ushuaia hours before the official closure of ports in all Argentina.

Everything seemed normal: The airport was still working, there were people on the streets and the stores were open. The crew continued with their routine of preparing the ship and the food supplies arrived as usual while we thought about where we could go or what would become of us and Europe.

Rick, our 2nd cook, took the last flight of the day to his home urgently where his young children are waiting for him. Some crew members would soon disembark and others would replace them.

March 17, everything exploded: Tierra del Fuego was quarantined until March 31 at the moment and we, docked in Ushuaia, found ourselves trapped without even being able to set foot outside the ship.

The situation seemed complicated: we have crew members who must return to their homes, others are traveling trying to get here, our families and loved ones are far away, we do not know if the voyage crew has managed to reach their homes ...

And then Europa makes itself heard. This is when it is shown that the Bark Europa is much more than a ship or a trip, it is a community and a family around this tall ship that we do not plan to abandon no matter what happens.

The messages were not long in coming: The office is overturned with us, the captains and all the crew that we have ashore elsewhere in the world constantly write to us and we feel them close, the friends of Europa who have traveled with us send us forces from everywhere. THANKS.

We want to tell you that we are well, that we are united and that we are going to move forward. What this ship represents goes far beyond navigation alone.

On behalf of the 19 crew and Captain Eric we want to thank you for all your messages and we also want to encourage everyone. We are also with you.

Yesterday afternoon Rick told us that he had managed to get to Holland and we toasted for him and for the voyage crew hoping that they had arrived safely at its destinations.

We stay on board taking care and working so that Europa, as soon as possible, can soon continue to sail the seas.

We will continue to inform you.

The crew of the Europa.

Dear Eric thank you for sharing the detail of where you are and how things are x I was looking forward to joining you across the Pacific which is now impossible. My best wishes and prayers are with you all on the Europa. May you sail free and homeward soon xx Kathleen

I'm wondering if you can shed some light on when the crew of your ship will be able to return home. My longtime friend, Bob Ames is among them and I am concerned about his well being. Thanks, John

Hi Europa Firstly I would like to say thank you for an awesome trip. Everything about Europa was fantastic, from the crew, the food, the lectures and most of all the scenery. I don't believe there is a better ship to sail on to see Antartica. Secondly this trip has brought 41 people from different countries together, made even more so due to the situation with the Covid-19 and the lock down of many cities and flight cancellations. Even though the trip is over, and the majority have made it home, we are still all in contact through WhatsApp being supportive, encouraging and also light hearted to help get us through this period of self isolation. To all the crew still aboard Europa I hope this nightmare ends sooner rather then later so that you can all be with your families and loved ones. Once again thank you for the most amazing trip ever, it sure is going to be hard to top. Yours in sailing Suzanne Mills