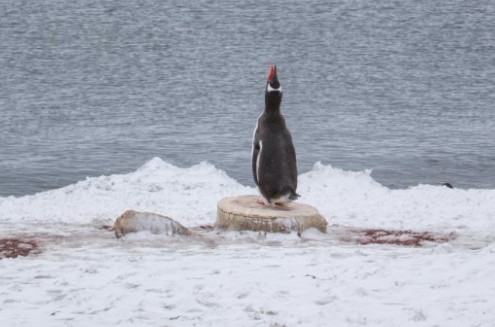 Before the wind turned east and decreased, we sailed from Deception Island with all square sails but the courses set, lower staysails, fore topmast staysail and inner jib. As the wind eased, middle staysails were also set for a while. Then, during the night we ended up making our way under engine across the Bransfield Strait, in conditions with light NE-ly wind, force 2-3. From then on, all canvas is stowed away and with the roaring engine we enjoy good sea state and lack of ice while gradually approaching the Antarctic Sound. During the morning the wind becomes SE-ly, gradually increasing, first to 20-23kn, when a group of Humpback whales is spotted close-by.

Engines are set on standby and as we drift, two of the animals seem to get curious about our “old lady” floating on their feeding grounds, and decide to investigate us from a short distance, offering us an unforgettable close encounter experience. Lucky enough all happened during breakfast, when many of us were already awake and around, or enjoying the first coffee of the day on deck. Then the whales kept going on their way and we resume our motoring with the increasing wind, now up to 30kn blowing on our nose on our 90 to 110º course. We sail pass increasing amounts of icebergs, some of them huge tabulars drifting from the Antarctic ice-shelves. Fortunately despite the non-favourable strong winds, the sun shines over clear skies, and just some clouds hang on top of the glaciated Antarctic Peninsula, which is clearly visible towering above the isolated Gourdin Island, the largest one of a group of islands and rocks 1nm North of the tip of Antarctic Peninsula, now at our starboard side.

When we make our way through open waters, around coffee time, with just huge icebergs at the horizon, Jordi gathers all the people interested in an introductory Seal talk, to give more information about their biology, different types and families, adaptations and present the different species that we might see during the trip. Once the talk is done and even though the wind blows hard, we still have a while to enjoy the good weather on deck and the amazing views of the ice, numerous icebergs and the truly Antarctic scenery offered by the Antarctic Sound. Motoring at around 5 to 6kn of speed we are getting closer to the West coast of Joinville Island, with its desolate icy landscape with what looks like a small and steep rocky cape in front of us. Joinville is the largest island of Joinville Island group, being about 40nm long in an E-W direction and 12nm wide, lying off the NE tip of Antarctic Peninsula, from which it is separated by the Antarctic Sound.

Discovered and roughly charted in 1838 by a French expedition under Capt. Jules Dumont d'Urville, who named it for François Ferdinand Philippe Louis Marie, Prince de Joinville (1818-1900), the third son of the Duc d'Orléans. As we approach, the rocky tip surrounded by ice walls which we have been aiming for, it reveals itself as a wide bay surrounded by glacier fronts and vertical cliffs on its Northern side. We were arriving at Kinnes Cove and the high rocky walls are the Madder Cliffs, the place where we plan to do our afternoon activity ashore. This is another site that the Europa has never visited before. In fact not too many people land here. This together with the whole surroundings not being well charted, was the reason why it took some time to scout the area with the ship, while our guides eagerly grab binoculars and survey the surroundings looking for a place to land amongst the steep slopes and the rocky shoreline.

Meanwhile the Captain finds a spot where to drop anchor and soon, with the help and assistance from the crew, they drop a zodiac and go checking what this amazing place has to offer. Countless Gentoo and Adelie penguins are everywhere and a suitable place to disembark is soon found. There is not much space on the lower part of the rocky coast, but it is teeming with wildlife. A big Elephant seal snoozes between heaps of almost fully-fledged Gentoo youngsters and Adelie chick crèches. Their parents run up and down the beach on their last efforts to grow them before it is their moulting time. After we all landed, Eduardo and Jordi took a group up the slopes to climb a bit higher. After an abrupt start, the terrain eases down as we pass by some flat areas on top of the hills, the place where most of the penguin rookeries are located. From there, an open wide valley leads gently to the Joinville ice cap and to the top of the 305m high cliffs rising steeply from the sea and forming the N side of the entrance to Kinnes Cove.

A magnificent 360º landscape unfolds before us as we reach a high viewpoint, while we enjoy the blue skies and sunshine of this great afternoon. Wind had eased down and finally the Captain decides to spend the night on that anchorage, planning to leave early in the morning for Hope Bay, on the opposite side of the Antarctic Sound. Due to its historical significance for tomorrow’s landing, the Weddell Sea and the area where we are sailing, Annukka gives a lecture on the Swedish Antarctic Expedition under the command of Otto Nordenskjold during the years 1901 to 1904. Jordi