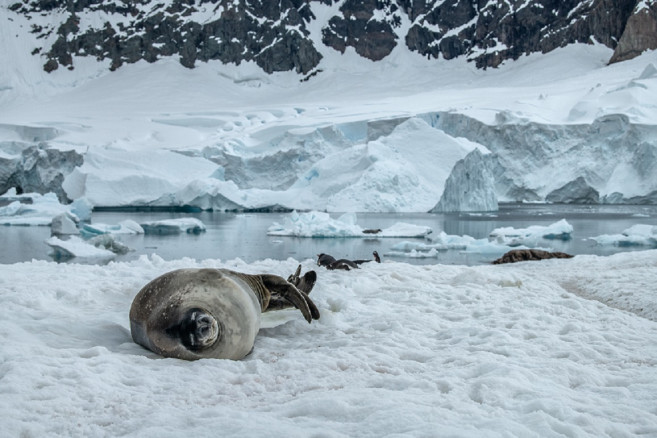 The narrows of the Peltier Channel lead us to Port Lockroy, an ample bay on Wienke island. Surrounded by glaciers, it accommodates the tiny Goudier islet inside. The area has served as a safe harbor for whalers first, then for expeditions and visitors since discovered by Charcot in 1904, during his first French Antarctic expedition on board the Français (1903-05).
He used the bay on several occasions during his first and also second expedition (1908-10) to these waters, naming it for Édouard Lockroy, a French politician who assisted Charcot in obtaining government backing for his voyage.
Once described and roughy charted, soon whalers started using it. Up to 40 of their ships could fit here during the summer, and as a remaining witness of these times, large chunky mooring chains are still rusting away wrapped around the coastal rocks. At Goudier Island, a couple of old wooden whaling boats lay amongst the ubiquitous Gentoo penguins, Just across the channel to Wienke Island, in Jougla Point many whalebones stick off the snow as evidence of the busy and bloody past of the area. There too, a small group of Antarctic Shags breed, mixed in with yet more Gentoo Penguins. A Weddell seal seem to pose for us, resting on the snow close to the rocky beach.

At Goudier, besides the whaling and exploration stories, lays the Station established during WWII in 1944, as part of the secret “Operation Tabarin”, to observe wartime enemy activities around these Antarctic waters. Later on the base was handed over to science, and was operated by the British Antarctic Survey (BAS). Nowadays it is taken care of by the United Kingdom Antarctic Heritage Trust, and it works during the summer season as a sort of Museum, Souvenir shop, and the most known Post Office in the Antarctic Peninsula. There, there is just a very reduced walking space (half of the island is closed to visitors due to a research project on their impact on the Gentoo population and their breeding). Now counting several hundred, it is difficult to believe there were actually none back in 1944, one of the main reasons to build the Base here. During the visit, many postcards were sent and many souvenirs of different kinds were purchased as memories, and to raise money for the ongoing restoration work around the peninsula carried out by the Heritage Trust.

Now, about 35nm of strong headwinds along the Neumayer Channel are ahead of us to reach the small bay of Neko Harbour in the evening. Yet another exciting landing was planned for today.

Located a bit further north than where Europa has been sailing during the last couple of days, now we enter again the main area of Gerlache surveying on board the Belgica during the years 1897-99. Amongst the many discoveries on their adventures, they found Andvord Bay, where Neko Harbour is located, naming it after Rolf Andvord, Belgian Consul in Christiania (Oslo) at that time.

Some big icebergs drift in the large bay and some bergy bits float close to the scenic landing spot. Wind and snowy weather gradually improve, and by the time we reach the spot, calm waters, dry weather and an amazing evening light welcome us.
Ashore, some care must be taken: countless penguin highways crisscross the snowy slopes, then walking along the track that climbs the glaciated slopes leading to scenic viewpoints must be taken with attention to hidden crevasses. And finally, the tide glacier that almost surrounds all of Neko Harbour could be dangerous should any big chunks come off while we are on the beach. Big waves can easily grow tall on those shallow waters.

The length of the beach is a favorite playground for the penguins, offering great photo opportunities while they go or arrive from their fishing grounds, or hanging around cleaning themselves before going on their foraging trips. Also Weddell seals snooze ashore or on the numerous ice floes that fill the bay.
Up the hills, a vantage point over the bay offers fantastic views. Down at the beach seagulls fish and skuas try to hunt some penguin eggs or recently hatched chicks.
A bit aside from them, later on, just before having to return aboard, a group of brave ones tried a dip into the 1.2ºC waters at the beach.

Neko Harbour is a great spot on continental Antarctica, a fantastic farewell to Antarctic landings. Despite the rainy, cold, snowy, and a mix of what we can call Antarctic weather that we dealt with for days in a row, last landfall proved to be a calm and dry leg stretch in a magnificent surrounding and loaded with lots of the local fauna.

Since a couple of days ago, Captain and Mate keep a good eye on the latest wind information, both local and at a larger scale. The prediction for the following days in Antarctica and along our way to Ushuaia tells of a set of circumstances calling for wrapping up everything, having a good night's sleep and be ready for starting with the watch duties on board. In no time we will be again steering the ship, keeping a good lookout and sailhandling out at the open oceanic waters of the Drake Passage.