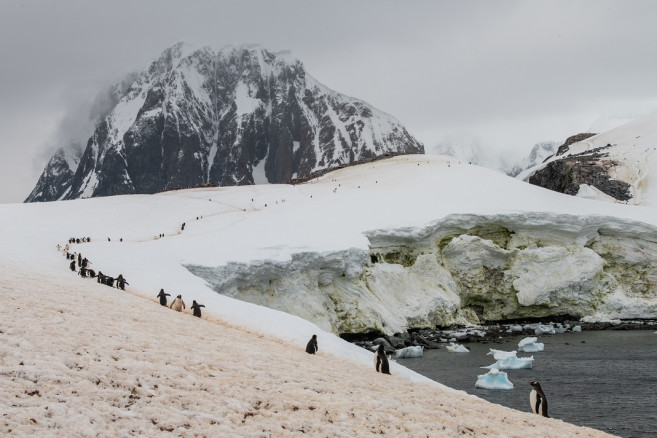 Already during the night, Captain was repositioning the ship to the closeby Yalour Islands. The passages between islets, rocks and icebergs that we had to deal with yesterday morning, now were closed. Ice had been drifting and moving around during the day. So the Europa had to sail over a longer route around all of them, under the foggy weather and long swell. Late at night, the ship lays in quieter waters about 8nm North from Collins Bay and Berthelot islands.

Yalour, a group of islands and rocks 1.5nm in extent, laying 1nm northwest of Cape Tuxen, is the planned landing for the morning. Again, as many features on those latitudes and further south along the peninsula, they were discovered by the French Antarctic Expedition, 1903–05, under Jean Bapiste Charcot, who named them for Lieutenant Jorge Yalour, of the Argentine Navy, who was an officer of the Argentine corvette Uruguay which came to the rescue of the shipwrecked Swedish Antarctic Expedition in November 1903.

The rocks here are predominantly igneous intrusive that have cooled deep underground. The main rock type is grey to black gabbro composed of small crystals of grey-white feldspar and black pyroxene. Their formation related with the growing of the Andes, to which the Antarctic Peninsula was part until the Drake Passage opened 22 to 30 Million years ago. Now here, the mountain building has nearly stopped though; it is only at the very tip of the peninsula and in the South Shetland Islands that the process continues.

Those rocks, eroded by the glacial activity, now show a rounded shapes peering out here and there out of the snowfield that covers the islands. Atop them about 8,000 pairs of Adelie penguins nest.
They seem to dislike the cold rain as much as we do. Actually they are used to colder conditions, icy seas and snowfall. Their populations at the West northern Antarctic Peninsula are being affected by the relatively warmer conditions, lack of large amounts of good sea ice and the increasing amount of rain. A situation that is not very against the Gentoos likings and lifestyle, so their numbers increase and gain terrain in the southern territories.

Yalour represents also a good hunting ground for Skuas and Giant petrels, which for the length of the landing patrol the rockeries where the Adelie take care of their chicks or even some still lay on eggs. With so many penguins and predators around, it was just a question of time until there was a kill. Always impressive, not very often seen, today both Skuas and Petrels succeeded on their hunt close to us.

Despite the wet conditions and low temperatures, we enjoyed a good couple of hours around the rockeries before calling back the zodiacs to embark the cozy, dry and warm Europa.
She soon heaved anchor, turn engines on and made way further north for the afternoon destination at Booth Island.
There soon after lunch we walk the hills of Port Charcot, a 2.4km wide bay at the north of Booth Island, the 8km long Y-shaped island forming the western side of the Lemaire Channel.

Landing took place at the southern beach of its NW arm called Salpêtrière Bay. Close to us a massive penguin highway, they also use the easiest access to the snowfields atop the beach, a flat rock between small icy cliffs. From there the visit brought us up a gentle slope leading to the north to a 50 metres above sea level hill where remains of the Charcot’s expedition can be found. Here, just at the little harbour beneath our feet is where the Français, the ship of the French Antarctic Expedition, 1903-1905 overwintered. Crowning the hill still remains the large cairn with a wooden pillar that they built here.

Continuing our visit to the site, next stop was to pay a visit to what is left of the Magnetic Observatory the expedition used for their measurements. A bit higher up, the three species of the Antarctic Peninsula share the nesting site. A few Chinstraps, a handful of Adelie and Gentoos in higher numbers. Skuas continuously patrol and check the colonies in search of chicks and eggs, occupation that has proved to be quite successful if we count the large numbers of eaten eggs that lay around.
A wonderful visit with fantastic views and interesting wildlife, despite the light rain and overcast skies.

Next the Europa heads north through the scenic Lemaire Channel towards Goudier Island, where she anchored at night, hoping for a good visit at Port Lockroy and surroundings for tomorrow. Fog lifts now and then allowing for good views of the Antarctic Peninsula mountains. The way to get to anchorage brought us through the narrow Peltier Channel. With its 6nm in length, it runs between Doumer and Wiencke Islands, yet another geographical feature discovered by the first French Antarctic Expedition and named by Charcot for Jean Peltier, noted French physicist. A sharp corner to Port leads off the waterway into the well known Port Lockroy.