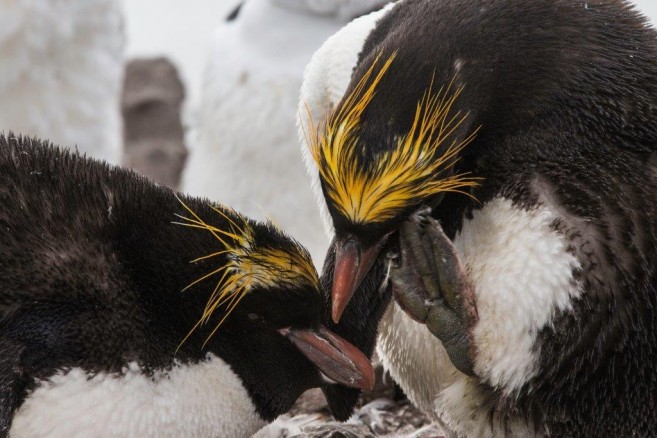 A complete day full of experiences

After our departure five days ago, making our way southward and even having to weather the stormy winds of the Drake Passage wearing ship and let pass the low-pressure system producing them, today was the day of our arrival to Antarctica.

W-ly winds increased during the night, and Europa made good progress with the use of her engines and setting all her Staysails. On this fashion the first big tabular iceberg was spotted at around 05:00h and not much later the lookouts report land at the horizon. Kind of relieving view after the past days dealing with the variable winds on the open ocean. South Shetland Islands were at sight. This archipelago counts with over twenty islands and islets lying northward of Antarctic Peninsula and extending about 280nm in all its length.

Of all Antarctic lands, the South Shetlands were the first ones to be found, charted and heavily used by the sealers and whalers. Their discovery was first reported in February 1819 by Captain William Smith of the brig Williams, for whom the island is named.

The route chosen for our approach followed the southern area of the archipelago, where the spectacular Smith Island is located. With the weather improving from the early morning, this island (with Mount Foster as its highest point, towering to 2105m in altitude) represents a perfect landmark visible from many miles away. Sealers as early as 1820 already knew and used its steep, glaciated and rough shores. Its sight meant the end of the arduous and frightening crossing of the Drake Passage, with its raging winds and wild seas, and the arrival to their calmer hunting grounds in the South Shetlands. The impressive Smith Island is 18nm long and 5nm wide, lying 45nm W of the well-known Deception Island, at sight today as well. Leaving its icy cliffs and glaciated peaks at our starboard, we make our way through the so-called Boyd Strait that runs on a NW-SE direction between Smith and the lower but also glacier covered Snow Island. First charted by the sealing and explorer Captain Weddell on October 1823, this waterway was called by him after Captain David Boyd, under whom he had served in HMS Firefly in 1810-11.

Great excitement hoovers all over the Europa for our arrival and the sight of land, icebergs and some of the Antarctic inhabitants. Penguins porpoise all around, a few Fur seals also pay us a visit while some Humpback whales are seen resting at the distance. But with no doubt what most attracted the attention of all was the group of Orcas spotted close to ship. A handful of females accompanied by a couple of calves approach us, while the large male of the group keeps an eye from the distance. They belong to the so called “B” type, being slightly smaller than the Killer whales we all know, with a marked saddle over their backs and a bigger eye patch. Those are the most common ones to see in the Antarctic Peninsula coastal waters.

During the morning safety lines and nets are stowed away, zodiacs prepared, and all is ready to go ashore later on. Getting closer to lunch-time the sun shines, the seas are calm and a fresh and fair W-ly breeze can be felt on deck, what a great chance to let the Europa spread all her canvas (but the Courses) for a memorable arrival to our planned landingsite located at the southern shores of Livingston island.

Many climb the rig on this fantastic day to learn while giving a hand to the permanent crew to unfurl the square sails, setting them afterward under the stare of the huge Livingston Island mountains of the Friesland Ridge, that rise to the 1684m of Mount Friesland, summit of the island.

Soon after our meal Captain orders to strike sail to drop anchor close to the shores of Hannah Point, rocky point teeming with wildlife, named after the sealer Hannah of Liverpool which wrecked here on Christmas day in 1820.

In no time, eager as we are for our first close contact with the Antarctic wildlife and have the chance to stretch our legs, we board the zodiacs and go ashore. We are welcomed by a high concentration of diverse wildlife: Gentoo penguins wandering all around, molting Chinstraps grouped around their now empty nests, accepting between them an elegant couple of Macaroni penguins. On the rocky outcrops Southern Giant petrels nest, and many of their chicks are also spotted. Surprisingly here at Hannah Point we can see many of the rare White morphs, same species but practically white in coloration. As we carefully make our way along Hannah Point under the attentive sight of several Kelp gulls, we approach an Elephant seal haul-out. There several young animals are piled together, sort of marooned ashore until they fully molt their fur. A volcanic ash covered slope link the rocky point where we landed to the wide-open beach of Walker Bay. Again, more sealing related history is linked to this name, as this long beach was named after John Walker, Master of the sealer John of London, who visited the South Shetland Islands in 1820-21 and provided the British Captain George Powell (who discovered the South Orkney Islands while searching for new sealing grounds) with descriptions and sketches of their

southern coasts for incorporation in his accurate 1822 chart, heavily appreciated and used by sealers and whalers since then.

There, more elephant seals can be found along the flat beach, that leads to a group of huge boulders where geologists that has been working in the area left an exhibition of some rock specimens and plant fossils, including ferns and tree trunks, witnesses from when Antarctica was a much warmer continent, about 60million years ago. Actually, Antarctica is still home for two species of highly adapted vascular plants: Deschampsia antarctica and Colobanthus quitensis, both present in this landingsite.

From there we reach the end of the beach and split into two groups, part of us climb the big glacial moraines of the neighbor Verila Glacier, while others walk towards its glacier front following the coastline. The views over the glacier from up the hills are breathtaking, and the way we use to descend is yet another surprise to all of us on that day full of Antarctic wonder, as we are guided straight down to the glacier. There we end up walking over the hard ice of its melting front, approaching from there its calving front, adorned with packed brash ice covering the shoreline.

Not much later zodiacs pick us up to bring us back on board where our smiley and happy faces after a great first day in Antarctica, are received with a tasty dinner and the promise of a calm night at anchor.